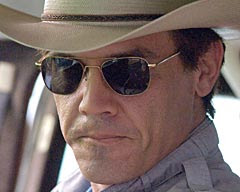 Dubya won't be too happy with "W."

President Bush is depicted as a rudderless young party animal in an upcoming Oliver Stone movie about his life, a trailer for the film shows.
A youthful Bush is shown gambling, taking a swing at his famous dad and downing shots of booze in the 96-second clip promoting the flick.

"What exactly are you cut out for?" asks by an actor playing the part of President George H.W. Bush. "Partying, chasing tail, driving drunk?"

The younger Bush is depicted slamming his car into a house and being led into a jail cell, a dramatization of his drunken-driving arrests. ...