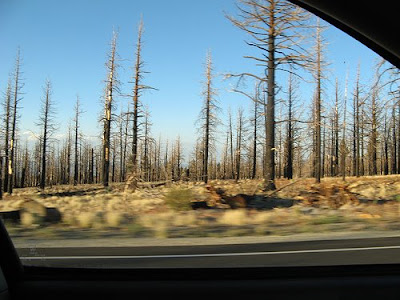 The wind-whipped freeway grass fire that destroyed 32 homes in Stockton Tuesday along Interstate 5 could easily have happened in Manteca.

Interim Fire Chief Chris Haas - who has made it clear that dry and windy conditions coupled with high weeds can bring major fires to the Northern San Joaquin Valley similar to those that for years have plagued Southern California - said the Stockton disaster along Interstate 5 near March Lane underscores the importance of weed abatement.

One Manteca engine company was sent to help cover a Stockton fire station while that city battled the fire that high winds spread from weeds along I-5 weeds to trees and then to homes and condos with highly flammable shake roofs. ...

Haas noted that at least one fire started up wind from the others. With the 20 mph plus winds, it was impossible for embers to have been responsible. That is what is leading fire officials to suspect an arsonist may be on the loose as the fires have suspicious origins.

Haas noted that over the past four years there have been a pattern of afternoon fires along the eastbound Highway 120 Bypass. At one point several years ago, there was a string of them started in succession from west of Tracy to Highway 99.

South County Crimestoppers is posting a reward of up to $1,000 for information leading to the arrest and conviction of anyone responsible for starting fires in Manteca. You can call 823-4636. You do not need to leave your name.

There have been about 18 grass fires along the Highway 120 Bypass so far this year....

According to crime statistics prepared by the Federal Bureau of Investigation:

Structural arson was the most frequently reported arson category in 2001, accounting for almost half of all arsons.

Arson had a higher percentage of juvenile involvement than any other offense tracked in the FBI's National Crime Index. Of all arson offenses recorded in 2001, 45.2 percent involved only juvenile offenders.