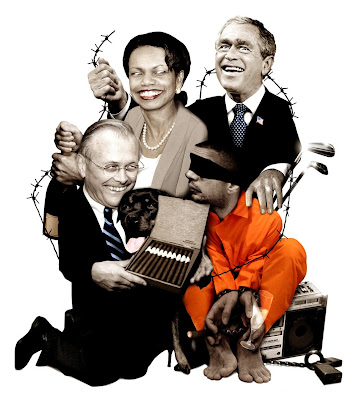 Amy Goodman of Democracy Now! and others have reported on on CIA mind control techniques at Gitmo. Hamdan, bin Laden's driver, currently on trial, "hears voices inside his head," according to Time magazine. This development occurred under detention. The average prole will jump to the conclusion that this is a symptom of induced scizophrenia, and this may be - but voices are also computer-generated and transmitted to the brain's auditory pathways of the CIA's subjects in highly illicit electromagnetic (EM) brain experimentation and operations, as I documented in Psychic Dictatorship in the USA (Feral House, 1995), and elsewhere.

It's quite possible - given the harshness of his detention by the CIA - that Hamdan was driven crazy by advanced mind control tech ...

" ... Hamdan's six years at Gitmo have left him a shell of a man. He has deteriorated mentally to the point where he can no longer meaningfully assist in his own criminal defense. He is suicidal, hears voices inside his head and talks to himself. ... "

The same can be said of many subjects of EM bio-electronic assault.

... In May 2002, Hamdan was flown to Guantánamo Bay, where he became detainee No. 149. Soon after, he met Soufan, the FBI's foremost expert on al-Qaeda, who interrogated Hamdan repeatedly until December 2003, when President Bush chose him from among thousands of detainees in U.S. custody to be the first Arab defendant in the military tribunals.

Hamdan was not necessarily an obvious choice for this historic role. He wasn't a high-ranking officer of al-Qaeda, nor was he known to have participated in any specific terrorist operations against the U.S. But from the prosecutor's perspective, he did have certain things going for him. Because the military tribunal system was brand-new, the government thought it made sense to try lower-ranking operatives first, in case anything went wrong. Hamdan had also been in U.S. custody since his capture and had not been rendered to any foreign countries for interrogation, which might have opened the door for his defense lawyer to raise questions about his treatment. And his story certainly had narrative appeal: Hamdan had been with bin Laden between 1996 and 2001, a stretch of time that spanned not just 9/11 but al-Qaeda's 1998 attacks on two embassies in East Africa and the 2000 bombing of the U.S.S. Cole in Yemen.

But in 2004, Swift, Hamdan's military defense lawyer, successfully urged his client to reject the government's tentative offer — 20 years imprisonment in exchange for full cooperation, including testifying at the military commissions of other detainees. Together with a young constitutional law professor named Neal Katyal, Swift built a defense that delayed Hamdan's military tribunal for years as it gradually made its way through the courts. His lawyers' perseverance meant little to Hamdan. Officials at Guantánamo have characterized Hamdan as a problematic prisoner, a rabble-rouser who turns every order into a negotiation and incites his fellow inmates to acts of defiance. For this reason, he has spent much of his time in conditions tantamount to solitary confinement. Hamdan has blamed Swift for failing to improve his life on Guantánamo and has often refused to see him and even fired him once. Hamdan has also gone on and off hunger strikes, one of which ended with his being force-fed liquid nutrients in a restraining chair.

In the spring of 2006, Hamdan's lawsuit, Hamdan v. Rumsfeld, reached the Supreme Court. The justices handed Hamdan a sweeping victory, with the majority finding that the President's military tribunals were unlawful. But Hamdan's odyssey didn't end there. Rather than offer Hamdan a reduced sentence, the Administration redoubled its efforts, pressing Congress to authorize the military tribunals, which it did by passing the Military Commissions Act during the waning days of the Republican Congress in the fall of 2006. Hamdan was recharged under the Military Commissions Act and moved into a new maximum-security facility. There he was permitted only an hour or so of indirect contact with other detainees during his daily recreation period. (He had to exercise alone, but his chain-linked recreation pen adjoined several others.)

By his lawyers' accounts, Hamdan's six years at Gitmo have left him a shell of a man. He has deteriorated mentally to the point where he can no longer meaningfully assist in his own criminal defense. He is suicidal, hears voices inside his head and talks to himself. And yet his trial, which is taking place in a small courtroom at Guantánamo Bay, will still influence the future of the tribunal system. Under the rules of the tribunal, Hamdan faces a jury of military officers who will decide his innocence or guilt. Whether their decision is perceived as fair will go a long way toward determining if the military tribunals that President Bush first authorized in the aftermath of the Sept. 11 attacks will survive under the next Commander in Chief. In that sense, the fame — or infamy — of Salim Hamdan may endure long after his trial ends.
•••••••
Jonathan Mahler's book, The Challenge: Hamdan v. Rumsfeld and the Fight over Presidential Power, from which this article is adapted, will be published in early August.