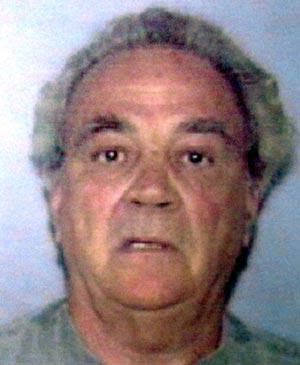 After decades of living in free society as a prolific, merciless mob hit man, Frank "The German" Schweihs, was finally set to face justice this fall.

But Schweihs, 78, who made even the most hard-core mobsters shiver with fear at the very sight of him, died Wednesday night, escaping a federal trial set for October. Schweihs, who had been housed at the downtown lockup since his capture in 2005, died of complications related to cancer.

His death elicited a strong reaction on Thursday from Nick Seifert, 46, son of Dan Seifert, who was slain outside a Bensenville factory by several mobsters in 1974, allegedly including Schweihs.

Seifert said he feels sorry for some of the families of the victims of Schweihs, who never got any sense of justice for their loved ones.

"It's incredible how he got away with all these murders," Seifert said.

Schweihs had been charged along with 13 others in 2005 in the landmark Family Secrets mob case. Schweihs was a fugitive at the time of the indictment, which took a historic hit at the Chicago mob organization, including charging the Outfit with 18 unsolved murders. Schweihs was captured in Kentucky later that year and was locked up in the Metropolitan Correctional Center.

Schweihs' cancer diagnosis let him avoid the trial last summer that resulted in the conviction of five defendants. But earlier this year, he was deemed healthy enough to stand trial this fall. Just last month, Schweihs mouthed off to a prosecutor at a hearing, asking: "Yeah you, you making eyes at me? Do I look like a fag to you?"

He was transferred to Thorek Hospital and Medical Center Monday and died Wednesday night.

At last year's trial, Schweihs was implicated as one of the men who took part in the Seifert murder. Seifert was to testify against the mob for stealing money from the Teamsters. Schweihs allegedly botched his role in the murder by failing to get Seifert in handcuffs. Seifert was able to escape and briefly ran away before another killer gunned him down, according to court testimony.

"Virtually every Outfit guy feared him," Mallul said. "They didn't necessarily even want to be around this guy. If they saw this guy coming, they would have to kill him," or they knew they'd be killed.

Schweihs developed his reputation for outrageous behavior early by defecating in cash registers after he and his mob crew cleaned out a joint.

His standing among mobsters was legendary.

The late mobster Michael Spilotro once warned his teenage daughter that if she ever saw Schweihs around their home, she was to lock the door and call the cops immediately, according to testimony in the Family Secrets trial.

In one conversation secretly recorded by the feds, Schweihs told a man he wouldn't be around because he had to go kill someone -- as most people would say they have to take out the trash.

"I know he died from cancer, but I think he got off easy."

"He certainly evaded justice, there's no question," Mallul said. "But there is a certain amount of satisfaction I think on behalf of law enforcement and the victims that he has been incarcerated" and charged.