Payne’s group had contract with Pakistan after 9/11
www.statesman.com/blogs
By Jason Embry | July 15, 2008 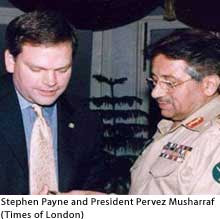 Stephen Payne, the Houston businessman whom the Sunday Times of London caught on video suggesting a donation to the Bush library could help land a meeting with key White House officials, was part of a group hired by the Pakistani government after the Sept. 11, 2001 attacks to improve relations with the U.S.

According to records available through the U.S. Department of Justice, Payne was part of a group, called Team Barakat, that Pakistan hired to provide strategic advice, interface with the U.S. government and members of Congress and try to strengthen relations between the two countries.

In materials promoting his business, Payne claims that he helped Pakistan negotiate a five-year, $3 billion aid package from the U.S., and that he “coordinated the removal of economic and military sanctions imposed on Pakistan under the Clinton administration.”

Payne worked for Sen. Kay Bailey Hutchison in the mid-’90s. He claimed to have a lofty title in her 2006 campaign, but Matt Matthews, the campaign manager that year, said Payne’s boast is not true.

http://www.statesman.com/blogs/content/shared-blogs/washington/washington/entries/2008/07/15/paynes_group_ha.html
•••••••
Also see: "Stephen Payne continues to make Jack Abramoff look like a piker," Majikthise: "... If even half of what Stephen Payne says about himself is true, there is no question that he had acces to the highest levels of the Bush administration. Payne was a Bush Pioneer in 2000 and 2004. He was also a member of Bush Cheney 04, George W. Bush for President, and Tom DeLay's Congressional Committee. According to a cached copy of Payne's curriculum vitae that I found on the Worldwide Strategic Partners website (now scrubbed), Payne claims to have been George W. Bush's personal travel aide during his father’s 1988 Presidential campaign. Payne served as Senior Advisor to the NASA Administrator on White House and Congressional Affairs in 2001, according to the same document. ... "
http://majikthise.typepad.com/majikthise_/2008/07/stephen-payne-c.html
••••••••
Stephen Payne Worked For Pakistan After Sept. 11
By Andrew Tilghman - July 15, 2008, 12:00PM

... Payne was one of several Bush supporters who made up a firm known as Team Eagle, which signed a $180,000-a-year contract with the Pakistani government on Oct. 13, 2001, according to a government database maintained under the Foreign Agents Registration Act.

The firm was also known as Team Barakat, according to FARA documents.

Payne was partners in the firm with Gary Polland, the head of the Harris County Republican Party, according to a January 14, 2002, report in the Houston Chronicle, which we found in the Nexis database.

Polland was widely celebrated as the man who empowered the Houston-area party machine in the 1990s.

A third partner was Houston lawyer Brian Ettinger, former aide to U.S. Senate Foreign Relations Committee Chairman Joseph Biden (D-DE), according to the Chronicle report. (Ettinger may have worked for a Democrat, but he's given more than $20,000 to Republican political campaigns and PACs since 2002, FEC reports show)

Payne, Polland and Ettinger did not immediately respond to calls for comment.

You might remember that just before September 11, 2001, our relations with Pakistan were very rocky. The U.S. State Department had strongly condemned Pakistan for testing a nuclear bomb in 1998. And we denounced Musharaff as an undemocratic dictator after he staged a coup in 1999 and ousted Prime Minister Nawaz Sharif.

Specifically, the U.S. had imposed a range of economic sanctions on Pakistan.

But all that came into question after the Bush administration decided it wanted Musharraf to let the U.S. run massive military supplies through his county as we sought to overthrow the Taliban regime in Afghanistan.

It was those economic sanctions that the Pakistani government wanted some help with from the Houston firm.

According to the contract signed in October 2001, the Pakistanis wanted:

"Meetings with Administration officials and members of congress and/or staff and share with Pakistan the U.S. attitudes and desires regarding the bilateral relationship with Pakistan and assist in bringing U.S. interests together. The policies in issue are:

(1) In ending U.S. sanctions against Pakistan.

Payne's current firm, Worldwide Strategies, has a brochure that rattles off a list of major accomplishments it achieved for Pakistan in a brochure originally obtained by the Times of London:

And this might be the most interesting accomplishment, Payne's firm claims:

After intensive coordinated efforts, Pakistan was finally able to purchase f-16 fighter jets (previously canceled under the Clinton Administration) and secured the delivery of C-130 transport aircrafts, helicopters and night-vision equipment from the U.S. to fulfill Pakistani military requirements.

Worldwide Strategies also quotes a letter from Musharraf to Payne:

... It gives me great pleasure to thank you for playing such an important role in strengthening US Pakistan ties . . . The challenges faced by both our countries in the aftermath of September 11th, brought us even closer, in which you played a pivotal role . . . -Pakistani President Pervez Musharraf, Letter to Stephen Payne, Dated January 21, 2006 . .

http://tpmmuckraker.talkingpointsmemo.com/2008/07/steven_payne_worked_for_pakist.php
Posted by Alex Constantine at 4:40 AM