This is the last post for a spell. There are 2,144 posts at this site explaining how America has come to embrace fascism and lose its mass murdering mind. Enjoy!

One more to sweeten your day: "Spying on pacifists, environmentalists and nuns" 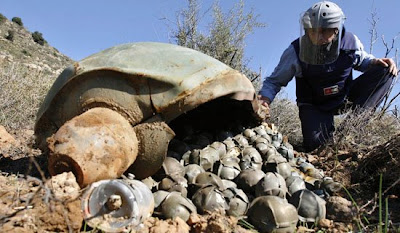 OSLO: In a surprising last-minute change of policy, the government of President Hamid Karzai of Afghanistan agreed Wednesday to join about 100 nations signing a treaty banning the use of cluster munitions, Afghan officials said.

The decision appeared to reflect Karzai's growing independence from the Bush administration, which has opposed the treaty and, according to a senior Afghan official who requested anonymity because of the sensitivity of the issue, had urged Karzai not to sign it.

"Until this morning, our position was that we were unable," Afghan's ambassador to Norway and the Nordic countries, Jawed Ludin, said in a telephone interview Wednesday. "But given the persistent campaign by the various civil society organizations and victims," he said, Karzai gave his authorization.

The news was greeted by cheers and celebration in Oslo's City Hall, where the signing ceremony began Wednesday. Even though it is one of the nations that has most suffered the effects of cluster munitions, especially in terms of civilian casualties, Afghanistan had been a significant holdout from the treaty.

The decision appeared to be the latest effort by Karzai to distance himself from his American backers. In recent months, he has become more bold in his public criticisms of the American mission, including speaking out against aerial bombings and other operations by the U.S.-led forces that have caused many civilian casualties, offended cultural sensitivities and undermined popular support for the war that routed the Taliban in late 2001. ...

As the sponsor of a drive to outlaw the use of the bombs, Norway was the first to sign the treaty, followed by Laos, Lebanon and Ireland.

But the United States has rejected the new treaty and therefore may legally continue to deploy its cluster-bomb arsenal.

Russia, China, India, Pakistan and most Middle Eastern states have also refused to give up their weapons.

The host of the signing conference, Foreign Minister Jonas Gahr Stoere of Norway, said universal compliance was not necessary for the cluster-bomb treaty to work.

"What we've adopted today is going to create profound change," he said. "If you use or stockpile cluster weapons after today you will be breaking a new international norm."

The United States has defended its decision not to sign the treaty. James Lawrence, director of the State Department's Office of Weapons Removal and Abatement, said in a telephone interview that the United States was "getting a bad rap" from treaty proponents despite developing cluster munitions that were less likely to harm civilians and despite providing nearly half of all global funding for the clearance of unexploded ordnance.

"The U.S. government and the U.S. military are aware of the humanitarian concern and are trying to do something about it in a reasonable way," he said. "We're actually doing more than a lot of the countries that are going to Norway to sign the treaty." ...