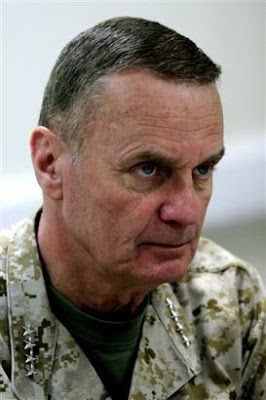 " ... In 2007 Jones became president of the US Chamber of Commerce's Institute for 21st Century Energy, meanwhile joining the boards of directors of Chevron and Boeing. ... "

In the spring of 1971, a young Marine captain named James L. Jones stood guard as part of a phalanx surrounding the Capitol, with shoot-to-kill orders should antiwar protesters try to storm the building. According to Boys of '67, a recently published biography written by his cousin, Jones, a decorated Vietnam combat officer, brooded about "the Jane Fondas and Jerry Rubins of the world" as he scanned the marchers for any sign of a long-haired Navy lieutenant, John Kerry, whose condemnation of atrocities by US troops rankled him. In Vietnam, Jones had served as aide-de-camp to gung-ho Maj. Gen. Raymond Davis, whose plan for defeating North Vietnam included "invading Laos, Cambodia, and the DMZ," said Jones sympathetically.

Jones was troubled when he found out that his sister Diane, nine years his junior and a student at Tufts University, had been among the throng of protesters that day in 1971. When their father, also a retired marine, made light of the differences between Jim and Diane, the younger Jones erupted. "OK, Dad, how would you have liked it if Uncle Vernon had wrapped himself in a Japanese flag while the Marines were out in the Pacific?"

Today Jones--a retired general and former Marine commandant who headed the US European Command and was commander of the North Atlantic Treaty Organization--will be at Obama's elbow in the White House as national security adviser. It's hard to imagine a less likely choice to be Obama's go-to guy on foreign policy. Hillary Clinton, Obama's nominee for secretary of state, and Robert Gates, his nominee for defense secretary, are already widely considered to be tough-minded hawks. But Jones is probably the most hawkish of all, and he seems least compatible with Obama.

That Jones has reached the pinnacle of the Washington power elite is testimony to his long-proven ability to operate in the corridors of power. The Republican-leaning Jones was introduced to Washington's political world in 1979 by John McCain, who was serving as the Navy's liaison to the Senate.

McCain took Jones, who'd just been appointed as the Marines' liaison, under his wing, and the 36-year-old Jones, by then a major, took avidly to politicking with the senators, cultivating ties to a freshman Republican from Maine, William Cohen. Ten years later during another stint on Capitol Hill, Jones bonded with Cohen.

After serving in the Gulf War and Bosnia in the 1990s, having risen to colonel and then three-star general, Jones's connection with Cohen paid off: when the latter became President Clinton's defense secretary, Cohen picked Jones for the plum post of his military assistant. Cohen lauds his loyal aide: "Jones knew where all the bodies were buried, and made sure mine wasn't one of them," he said recently. Jones, who retired from the Marines two years ago, has remained close friends with McCain. Jones made an appearance in Missouri with the Arizona senator in June, after he had clinched the GOP presidential nomination.

Jones is a fierce advocate of NATO expansion. As commander of the alliance from 2003 to 2006, he pushed for it to take greater responsibility for securing oil supplies in the Persian Gulf and the Middle East. "Our activities are definitely moving to the East and to the South," he declared, speaking to the National Press Club in 2006. He pushed NATO hard--encountering stiff resistance from European allies--to strengthen its commitment to Afghanistan, and he got NATO involved with training missions in Iraq too.

No longer, he says, can NATO confine itself to the defense of Europe; it must increasingly engage in out-of-area operations. "The term 'out of area' doesn't really apply anymore, because that geographical restriction has faded into history," he told the Council on Foreign Relations in 2006.

"NATO's also getting ready to certify a NATO response force, which is also a new operational concept that will give the alliance much more flexible capability to do things rapidly at very long distances."

In 2007 Jones became president of the US Chamber of Commerce's Institute for 21st Century Energy, meanwhile joining the boards of directors of Chevron and Boeing. Among the eighty-eight recommendations of the institute--including, naturally, Drill, baby, drill!--is this: "The U.S. government should engage the North Atlantic Treaty Organization (NATO) on energy security challenges and encourage member countries to support the expansion of its mandate to address energy security."

Jones pays lip service to Obama's oft-stated campaign pledge to pull US combat forces out of Iraq over sixteen months. Not long ago, however, Jones was of a different mind. "I think deadlines can work against us," he said in 2007. "And I think a deadline of this magnitude would be against our national interest." His views on Iraq during the run-up to the war aren't known, though it's reasonable to assume that, like Gen. Anthony Zinni, a former Centcom commander, Jones was skeptical of the neoconservative-promoted war. According to Bob Woodward's State of Denial, in 2005 Jones warned the man who was soon to be chairman of the Joint Chiefs, Gen. Peter Pace, that he faced a "debacle" in Iraq. But when many retired generals began to denounce the Bush administration's Iraq policy in 2006, Jones pointedly demurred. "I do not associate myself with the so-called 'revolt of the generals,'" he said.

Regarding Afghanistan, where Jones is a proponent of a troop surge, he's shown himself to be credulous at best. Repeatedly over the past three years he's touted the view that a newly arriving brigade would turn the tide, Vietnam-like, and repel the Taliban. And time and again he's cast doubt upon the plain-as-day fact that the Taliban are resurgent. It is worrying--again echoing hawkish arguments about the Vietnam War--that he links failure in Iraq and Afghanistan to loss of face: "I personally don't believe that the United States can afford to be perceived as having not been successful in either Iraq or Afghanistan, and I think the consequences for such a perception or such a reality will be with us for years to come in terms of our ability to be a nation of great influence in the twenty-first century."

As Supreme Allied Commander in Europe, Jones also sought increased engagement of US and NATO forces in Africa, and he strongly supported creation of the controversial new US Africa Command. "Africa is a continent of growing strategic importance," he said. Two years before the establishment of that command, Jones was enthusiastic. "My staff at EUCOM spends more than half of its time on African issues," he acknowledged.

Some of Jones's supporters point to his 2007-08 role as special envoy on Palestinian security issues as a hopeful sign that he will encourage Obama to confront the Israel lobby. Palestinian negotiators praise Jones's patience and willingness to listen to their complaints, and a report that he prepared after his mission, said to be critical of the Israeli army's role in the West Bank--it "makes Israel look very bad," said the Israeli daily Ha'aretz--was suppressed by the Bush administration.

But that's a slim reed for hope. While Jones is deeply familiar with the Middle East and South Asia, and is a fluent French speaker who lived in Paris for fifteen years during his youth, in the end he's the military's guy. He's the proverbial hammer in search of nails. "He's not a strategic thinker," says a prominent military analyst in Washington. But when Obama needs a hammer, he'll have one conveniently nearby.

Obama's supposed choice for National Director of Intelligence, Dennis Blair is suspect also. He has a quite sordid record when it comes to East Timor and Indonesia. As militia and Indonesian military violence was escalating in 1999 Blair went to Indonesia. Instead of delivering a strong message that the Indonesian military should back off and respect human rights, he offered understanding and further U.S. military assistance. The East Timor and Indonesia Action Network (ETAN) describes this here or sign the petition at http://www.petitiononline.com/blair01/petition.html