“JFK plot”: Is Washington trying to Open a Caribbean Front in War on Terror?

" ... the profile fit all the characteristics of a classic patsy in a government-organized conspiracy. As in so many other of these supposed 'plots'—Fort Dix, Miami, Albany—the only figure that seemed to have the single-minded determination and organizational abilities to create a 'conspiracy' that could be documented through emails, recordings and videotapes was an individual known to the public only as 'the source'—a paid informant of the FBI. ... " 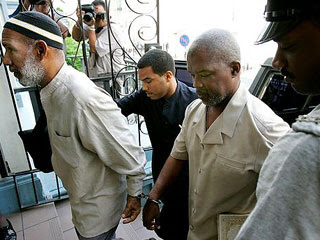 Last weekend’s scare headlines and breathless broadcast reports about the unspeakable horrors that were supposedly foiled with the uncovering of the “JFK plot” have largely faded from view as evidence mounts that the alleged threat was grossly hyped—if not totally invented—by US authorities.

The purported plan to ignite a massive chain reaction of explosions by planting a bomb beside one of the jet fuel tanks at New York’s John F. Kennedy Airport, or at a section of the pipelines leading into the facility was, experts noted, a physical impossibility.

One law enforcement official told Newsday that he “cringed” when the Brooklyn federal prosecutor spoke of the “unthinkable” devastation that had been prevented with the disruption of the plot. “The plot, he knew, was never operational,” the paper reported. “The public had never been at risk.”

The man referred to improbably as the plot’s “mastermind,” Russell Defreitas, a 63-year-old naturalized US citizen from Guyana, was described by friends and neighbors as someone who eked out a living selling incense and collecting welfare, and was periodically homeless. Those who knew him were incredulous about the tale told in the federal indictment, pointing out that he was someone who had difficulty starting his own car, much less planting high explosives on pipelines.

In short, the profile fit all the characteristics of a classic patsy in a government-organized conspiracy. As in so many other of these supposed “plots”—Fort Dix, Miami, Albany—the only figure that seemed to have the single-minded determination and organizational abilities to create a “conspiracy” that could be documented through emails, recordings and videotapes was an individual known to the public only as “the source”—a paid informant of the FBI.

The three men named as Defreitas’s co-conspirators in the alleged plot—two Guyanese and one Trinidadian—are all in the custody of the authorities in Trinidad. The last of them turned himself in on Tuesday. Abdel Nur, 57, described in some published accounts as a drug user, poor and with no steady means of support, told reporters as he was led handcuffed into a Port-of-Spain court, “It’s a conspiracy, there was a setup.” He added, “America never did nothing [to me].”

The government of Trinidad would be fully justified in denying the US request for extradition of the three named suspects in its custody on the grounds that they face a real threat of torture if they are turned over to American authorities.

This was precisely the grounds invoked—with far less justification—by Washington for its rejection of Venezuela’s request for the extradition of Luis Posada Carilles, the anti-communist terrorist and long-time CIA agent, wanted for the 1976 terrorist bombing of a Cuban jetliner carrying passengers from Venezuela, in which 73 people were killed. Eleven of those who died in that attack were citizens of Guyana.

The daughter of another of the suspects, meanwhile, went before the press in Port-of-Spain to defend the innocence of her 62-year-old father, Amir Kareem Ibrahiim, a Trinidadian, and his friend and fellow Shiite Muslim, Abdul Kabir, 57, a former member of the Guyanese parliament. 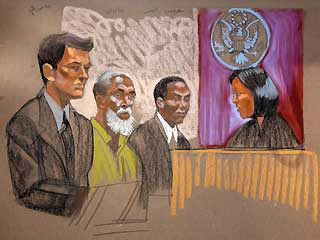 Speaking in the name of the close-knit Shiite community in the two neighboring countries, Huda Ibrahiim insisted that her father and Kabir were the victims of US government entrapment by the FBI’s paid informant, named as “the source” in the federal indictment.

“That source is the only person culpable of any of the activities mentioned in the complaint,” she charged. “That source visited our brothers with the specific intent to entrap them in activities they know nothing about, never agreed to, and did not participate in.”

Huda, 20, said that the FBI’s informant had posed as a visiting Islamic missionary from the US when he visited the homes of Kadir and Ibrahiim.
Kadir’s wife earlier told Kaieteur News in Guyana, “We are shocked, we are not part of these things. To begin with, we are not al Qaeda ... we are Shia.

My husband is a decent, devoted, intelligent Muslim. Both of us have relatives in the United States. It would be nonsensical for him to plot something like this.”

The jailed man’s daughter also suggested a political motive for the apparent exercise in entrapment. “We believe that the persons responsible for the arrest of our brothers are doing it for a purpose other than the protection of the people and interests of the USA,” she said.

She continued, “They have apparently done so in the interest of shoring up a lame duck presidency and increasing the lame chances of the Republican Party being returned to power in November 2008.”

Huda Ibrahiim’s reasoning is sound. There is a distinct odor of frame-up and state provocation emanating from the “JFK plot” involving four alleged conspirators whose average age is 60 and who had neither any known terrorist ties nor any apparent ability to pull off a bombing attack.

The type of hysteria that the government, aided and abetted by the media, attempts to generate with the springing of such “plots” on the public serves a definite political purpose. That is to intimidate political opposition, to justify anti-democratic measures like the Patriot Act as well as practices such as the torture and rendition of those deemed “enemy combatants,” and, finally, to divert public attention from the deepening debacle in Iraq.

There may well be another political motive behind this latest FBI informant-driven “terror plot.” While the hyped tale of barely avoided mayhem at JFK may have faded from the front pages of the American press, the so-called plot is still big news in the Caribbean, and for good reason.

An underlying theme in the presentation of the indictment and the announcement of the arrests is that Washington has decided to target the region as a new front in its “global war on terror.”

This came through clearly in the statements made by New York City Police Commissioner Raymond Kelly, whose department collaborates intimately with the FBI and has brought into its hierarchy as head of intelligence the CIA’s former director of operations, David Cohen.

Kelly told the media that the plot was “different in its distinct ties to the Caribbean, a region that is rarely thought of in terms of terrorism but of increasing concern to us as a crucible in the foment of Islamic radicalism.”

Kelly’s comments were widely echoed by government officials, security agency sources and the US mass media. The Caribbean has a “potential for extremism,” declared Homeland Security spokesman William Knocke.

Others have fleshed out this “potential” by describing the region as ripe for terrorist recruiting because of the widespread poverty in Caribbean nations, a feature that they share in common with the vast majority of the planet.

Others, such as Richard Miniter, the right-wing ideologue who passes himself off as a “terrorism expert” are sounding the same note: “This investigation takes us in a new direction where we don’t have to just worry about threats from the Middle East, Afghanistan and so on, but from the Caribbean ...”

Meanwhile, the New York Daily News, one of the newspapers that sensationalized the “JFK plot,” published an article Monday entitled “Radicalism heating up in the Caribbean.”

It warned, “From Argentina to Haiti, the rise of radical Islam in the Caribbean and Latin America is alarming US counterterror officials and leaders in the region, who say the JFK bomb plot should be a wakeup call.”

The article went so far as to quote “senior counterterrorism officials” as expressing the concern that Islamists could turn Trinidad “into another Mogadishu.” Given that, according to the latest available census data, Muslims account for less than 6 percent of the population, this scenario sounds more than a bit far-fetched.

A “top counterterror manager” is quoted as saying, “The threat in South America is growing. Lebanese Hezbollah is gaining a real foothold there.”

This and similar scaremongering accounts in the media likewise link the supposed Caribbean “Islamic threat” to the friction between Washington and the government of President Hugo Chavez in Venezuela. One of the arrested suspects, Abdul Kadir, was arrested after Trinidad authorities stopped a flight he was on bound for Venezuela, where he was to pick up a visa and fly on to Teheran for a conference.

Much has been made in these accounts of the friendly ties established between the Venezuelan and Iranian government, suggesting that the link is a foundation for a new axis of terrorism in the Western Hemisphere.

Under conditions in which Washington is escalating its threats and provocations against the two countries—both of which boast what are among the largest reserves of oil in the world—the political and geo-strategic motivation for hyping a terrorist threat emanating from the Caribbean becomes clear.

Just as the “war on terror” has been used as the pretext for the war to conquer Iraq, so too it can be employed for future US military interventions aimed at laying hold of the oil fields of Venezuela and Iran.