"Mike Connell, the chief IT consultant to Karl Rove, who recently died in a private plane crash, reportedly asked for protective custody from the government before he died."
http://deeperwants.com/ratboys_anvil_2/2008/12/if-even-half-of-this.html 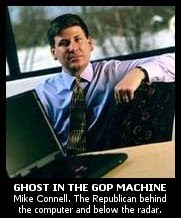 ... It's a real tale of intrigue, slowly unfolding in court records and on left-leaning blogs since President George W. Bush won Ohio, securing a second term in 2004.

Few news outlets covered allegations of conspiracy until Dec. 19, when the geek, Richfield businessman Michael Connell, 45, crashed his Piper Supercub on his approach to Akron-Canton Airport.

Now, nine days after the crash, there are more questions than answers. The only thing certain about this tale is its unhappy ending.

Connell once told a Plain Dealer reporter that the political bug bit him in 1984 when he was studying marketing at the University of Iowa. Over the next decade, the Illinois native bounced to various government jobs and worked on the campaigns of at least two Republican congressmen.

He married, and in January 1993, he and his wife, Heather, moved to Ohio and took root. Michael Connell signed on as press secretary for Republican Martin Hoke, then a congressman from Cleveland. The following year, the Connells launched an Internet consulting company in their basement. They called it New Media Communications. It was a cutting-edge concept in 1994.

Selling Web sites was tough. In 1996, they declared bankruptcy.

But two years later, in 1998, Michael Connell caught a break that would forever change his life - Jeb Bush hired him as his Internet strategist during his campaign for Florida governor.

Several years before, Connell had worked on projects for George H.W. Bush, then president. But it was vastly different from using the Web to ignite Jeb Bush's political career.

And a GOP geek star was born.

By 2000, the Connells' modest basement business had blossomed to a $3 million powerhouse with 38 employees.

But what worked online for Jeb Bush in 1998 wouldn't work for George W. in 2000. Internet years, Connell once observed, pass like dog years: One year on the Internet is like seven in ordinary years, he said.

It took Connell's company 45 days to make George W.'s site easy to use, Connell said. He used the Internet not only to get out George W.'s message, but also to find volunteers and raise money from new constituent groups.

Again, it was a historically close election with counts and recounts. Democrat Al Gore ultimately conceded Dec. 13 and another Bush was elected - thanks in part to Connell and his company.

By the time George W.'s re-election rolled around in 2004, the Internet was as common to people as microwave ovens.

Bush ultimately won Ohio by about 118,000 votes, but some didn't believe it. There were allegations of election fraud and in 2006, several groups representing black and college-age voters filed a federal lawsuit accusing former Ohio Secretary of State Ken Blackwell and others of conspiring to undermine their voting rights.

Connell was soon accused of using his computer savvy to help Bush loyalists rig the 2004 election. The lawsuit, filed by some of Bush's harshest critics, garnered little attention as it moved through federal court.

Among other things, it contends that some of the Ohio election results were rerouted to a computer system set up by one of Connell's spinoff companies in Tennessee on election night, opening the results up to manipulation.

The same Tennessee computer system, the lawsuit claims, was used to shield White House e-mails during probes into the 2005 firings of several federal prosecutors who disagreed with Bush politics.

In September, Connell received a subpoena to testify in the case. Connell fought it, saying among other things that his testimony could reveal trade secrets that would hurt his companies.

But a judge ordered Connell to testify, which he did in November in a closed-door session.

One of the attorneys who questioned Connell that day told a McClatchy-Tribune reporter that Connell testified that he knew of no GOP effort to rig the election.

It is unclear whether Connell's testimony was supposed to continue.

It was a clear evening sky when Connell took off from an airport in suburban Washington, D.C., on Dec. 19 to fly home. But as he approached Akron-Canton Airport, clouds rolled in and visibility plummeted. Connell crashed about three miles from the runway.

The National Transportation Safety Board and Federal Aviation Administration are still investigating.

Yet left-leaning blogs immediately began questioning whether Connell's plane had been tampered with to prevent him from implicating Republican strategist Karl Rove in criminal wrongdoing.

A local TV news report fueled speculation, citing an anonymous source who said Connell had twice canceled flights in recent months after warnings that someone had tampered with his plane.

Numerous blogs have also reported that Columbus attorney Cliff Arnebeck - who filed the lawsuit - this summer received a tip that Connell's life was in danger and that Rove had threatened Connell and his wife, Heather. Arnebeck did not return a call Saturday.

One of Connell's attorneys did nothing to halt the rumors.

He declined to comment Saturday on the TV news report or to answer questions about the litigation. The attorney instead referred to a brief statement that Connell's family posted on its business Web site, technomania.com.

The statement, posted Monday, calls Connell's death "a terrible tragedy for his family, our community and our country." It talks about Connell's faith, family and work to help the poor around the world and describes him as "an engaged citizen, who was actively involved at all levels of our political system."

Do they suspect foul play? The statement doesn't say.

The family wants to be left alone.

It's a mystery with an unhappy ending.

Larisa, who Connell had been talking with, has told me that Connell was "ready to tell everything."
•••••••
Republican IT consultant subpoenaed in case alleging tampering with 2004 election

COLUMBUS -- A high-level Republican consultant has been subpoenaed in a case regarding alleged tampering with the 2004 election.

Michael L. Connell was served with a subpoena in Ohio on Sept. 22 in a case alleging that vote-tampering during the 2004 presidential election resulted in civil rights violations. Connell, president of GovTech Solutions and New Media Communications, is a website designer and IT professional who created a website for Ohio’s secretary of state that presented the results of the 2004 election in real time as they were tabulated.

At the time, Ohio’s Secretary of State, Kenneth J. Blackwell, was also chairman of Bush-Cheney 2004 reelection effort in Ohio.

Connell is refusing to testify or to produce documents relating to the system used in the 2004 and 2006 elections, lawyers say. His motion to quash the subpoena asserts that the request for documents is burdensome because the information sought should be “readily ascertainable through public records request” – but also, paradoxically, because “it seeks confidential, trade secrets, and/or proprietary information” that “have independent economic value” and “are not known to the public, or even to non-designated personnel within or working for Mr. Connell’s business.”

According to sources close to the office of Clifford Arnebeck, one of the Ohio attorneys who brought the case, Arnebeck intends to ask the court to compel Connell to testify. An emergency conference with the judge, originally scheduled for Monday, is to be rescheduled.

The case, known as King Lincoln Bronzeville Neighborhood Association v. Blackwell, was filed against Kenneth J. Blackwell on Aug. 31, 2006 by Columbus attorneys Clifford Arnebeck, Robert Fitrakis and others. It initially charged Blackwell with racially discriminatory practices -- including the selective purging of voters from the election rolls and the unequal allocation of voting machines to various districts -- and asked for measures to be taken to prevent similar problems during the November 2006 election.

On Oct. 9, 2006, an amended complaint added charges of various forms of ballot-rigging as also having the effect of "depriving the Plaintiffs of their voting rights, including the right to have their votes successfully cast without intimidation, dilution, cancellation or reversal by voting machine or ballot tampering." A motion to dismiss the case as moot was filed following the November 2006 election, but it was instead stayed to allow for settlement discussions.

The case took on fresh momentum earlier this year when Arnebeck announced in July that he was filing to "lift the stay in the case proceed with targeted discovery in order to help protect the integrity of the 2008 election." The new filing was inspired in part by the coming forward as a whistleblower of GOP IT security expert Stephen Spoonamore, who said he was prepared to testify to the plausibility of electronic vote-rigging having been carried out in 2004.

Arnebeck’s hope was that in the course of the discovery procedure it would be possible to subpoena Michael Connell, former White House Deputy Chief of Staff Karl Rove, and others to obtain additional information and improve the focus of the case. The stay was lifted Sept. 19, 2008 by an order from Magistrate Judge Terrence P. Kemp of the United States District Court for the Southern District of Ohio, and a subpoena was served to Connell on the following Monday, Sept. 22.
Allegations against Connell

The interest in Mike Connell stems from his association with a firm called GovTech, which he had spun off from his own New Media Communications under his wife Heather Connell’s name. GovTech was hired by Ohio Secretary of State Kenneth Blackwell to set up an official election website at election.sos.state.oh.us to presente the 2004 presidential returns as they came in.

Connell is a long-time GOP operative, whose New Media Communications provided web services for the Bush-Cheney ’04 campaign, the US Chamber of Commerce, the Republican National Committee and many Republican candidates. This in itself might have raised questions about his involvement in creating Ohio’s official state election website.
Posted by Alex Constantine at 10:34 PM