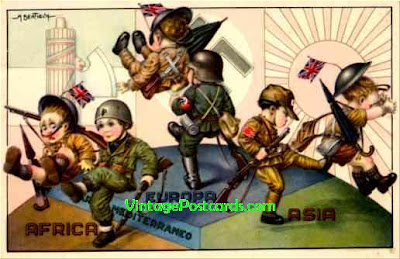 Nagata Tetsuzan, in company with Obata Toshiro and Okamura Yasuji (all three trained in military intelligence) and Prince Hirohito, had met secretly at the German spa Baden-Baden on October 27, 1921 to plan a total war against the West.[1] With the exception of Hirohito, all were then serving at Japanese embassies in Europe. They developed strategies to purge the army of the Samurai (knightly) leadership of the Choshu clan, to reorganize and modernize the army, and a plan to dominate Manchuria. Another young officer-attendee was Tojo Hideki, the future prime minister who would launch the Pacific war, the imperial scheme.

Corporations, like Matsui, first targeted Manchuria’s natural resources in the First Sino-Japanese War from August 1, 1894 to April 17, 1895. Japan, ready to accommodate Japanese corporations and with backing from foreign banks, like J. P. Morgan, declared war on Tsarist Russia on February 8, 1904 specifically to gain control of the strategic Kwantung Peninsula, the area leased for 25 years to Russia by China in March 1898. Japan was granted that area after the war and established the Kwantung Garrison in 1906. The semi-autonomous Kwantung Army, part of Japan’s Imperial Army took its name from the Kwantung (meaning east of Shanhaiguan) Peninsula,

General Araki Sadao was the Japanese military attaché in Russia during WWI.[2] He became the Commandant of the Army War College in 1928. He indoctrinated the younger pseudo-patriotic naïve officers with a radical-right-wing agenda. Araki embraced Bushido (“The Way of the Warrior”) and permitted officers to wear swords for the first time since the samurai rebellions of the 19th century.[3]

The ultranational (superior-nation complex) objective was to seize the government, divorce it from the people and transform it into a profitable military dictatorship by removing opposing imperial advisors, creating chaos among radical students and unifying the many secret societies. The military foundation of the conspiracy was set by 1929. They installed General Honjo Shigeru, a general in the Imperial Japanese Army during the early period of the Second Sino-Japanese War (1904-1905). He served as commander of the Kwantung Army from August 1, 1931 to August 8, 1932. Honjo was an 1897 graduate from the Imperial Japanese Army Academy. Some of his classmates included future Prime Minister Abe Nobuyuki, and generals Araki and Matsui. He would prevent any potential interference. The Kwantung Army then had 12,000 willing men and would grow to 700,000 by 1941.[4]

Araki, with three other conspirators, devised the Mukden Incident by May 31, 1931. On September 18, 1931, a non-strategic section of Japan's South Manchuria Railway was expertly dynamited by Japanese militarists. The Japanese, to be persuasive, claimed that the railway section was vital. It wasn’t! Asbestos-laden buildings unable to attract profitable renters and in need of being torn down and replaced would also serve the same purpose. Japan blamed the incident on the Chinese who, responding to the explosion, came running to investigate. The Japanese were prepared to invade; they already had the major munitions hidden at the Officer’s club in Mukden. This staged false flag incident was the pretext for an attack on the morning of September 19, 1931 against the Chinese garrison at Beidaying, eight hundred meters away from the incident. Five hundred unprepared Chinese soldiers perished; two Japanese soldiers died. Some researchers, such as David Bergamini, claim that Hirohito knew and approved of the whole plot. As a civilian, he was interned in a Japanese concentration camp in the Philippines.

In February 1932, Japan renamed Manchuria. It would now be Manchukuo. It was literally the kingdom of the Kwantung Army whose intent was to seize all of Manchuria, Mongolia and Northern China.[5] By 1936, the Kwantung Army managed Manchuria. Young bureaucrat Kishi Nobusuke, recognizing a great business opportunity, convinced his uncle to move the headquarters of his newly-formed Nissan zaibatsu (conglomerate) to Manchukuo. Nissan developed its iron and coal mines, timber and opium production. Life was luxurious for the 900,000 Japanese citizens now living in Manchuria as compared to the faltering economy in Japan.[6]

In the 1920s and 1930s, there were two opposing factions (similar to America’s two-party charade) both of which endorsed totalitarian, fascist political philosophies: The ultranationalist Kodoha was led by General Araki who became Minister of War in 1933. According to a Time Magazine article dated January 23, 1933, Araki considered Hirohito as “utterly perfect,” the “Son of Heaven.” Hence, his soldiers rendered absolute obedience and abided by the strict government regulations which prohibited criticism of the emperor or his policies.

The other clique, called the Control Group (Toseiha) was led by General Ugaki Kazushige and was composed of power-seeking, aggressive opportunistic officers who were gradually moving Japan towards a military dictatorship with an increased military budget. Uncooperative politicians were assassinated (as Kennedy and others in our own country) in order to establish a military dictatorship and escalate warfare in order to impose a colonial Japanese empire on the Asian mainland. This group wanted to conquer Soviet Siberia and China, followed by total war with the West.[7] Total war required the cooperation of the bureaucracy and the zaibatsu to maximize Japan’s industrial and military capacity. In 1936, the two factions would merge to form the Imperial Way Faction nationalist party.

With the goal of overthrowing the political and economic elite, allegedly to save Japan from the evil influences controlling the emperor, the far-right terrorist organization Ketsumeidan (League of Blood), composed of student radicals and young Japanese military cadets led by Inoue Nissho, assassinated Finance Minister Inoue Junnosuke (no relation) on February 9, 1932 and Baron Dan Takuma, the Director General of Mitsui, Japan’s largest zaibatsu conglomerate on March 5, 1932. On May 15, 1932, Prime Minister Inukai Tsuyoshi, born to a former samurai family, was assassinated because he objected to the army’s expansion into Manchuria. He wanted to negotiate for peace with China. Attempts to bomb the Mitsubishi Bank and Tokyo police headquarters occurred on the same day.[8] Inoue Nissho, after minimal rehabilitation, would maintain a prominent right-wing position after WWII. ...