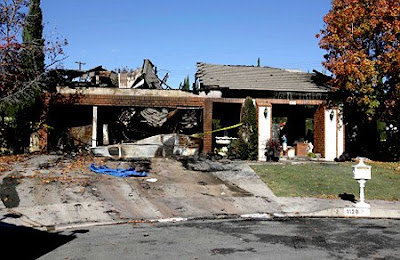 NPR reports that Pardo has no criminal record, and he was a church usher. Students of EM mind control technology will know what to make of his employment history.

From the Los Angeles Times ...

" ... Other details about [Bruce Jeffrey] Pardo also emerged today. According to his divorce papers, he was fired in July from his job as a software engineer at ITT, a defense contractor in Van Nuys. A spokesman said Pardo worked in the air and surface surveillance radar division for three years, but declined to say whether he left of his own accord or was fired.

"Another source said he had once worked at Northrop Grumman Corp. and that he had claimed on his company profile that he had a master's degree from USC. But the source said that although he had been enrolled there, he never received the degree.

"Investigators said the shooting likely had been planned over a period of several months. ... "

" ... LEAA [the now-defunct Law Enforcement Assistance Administration] also subsidized the research and development of gadgets and techniques
useful to behavior modification. Much of the technology, whose perfection LEAA funded, had originally been developed and made operational for use in the Vietnam War. Companies like Bangor Punta Corporation and Walter Kidde and Co., through its subsidiary Globe Security System, adapted these devices to domestic use in the U.S. ITT was another company that domesticated the warfare technology for potential use on U.S. citizens. Rand Corporation executive Paul Baran warned that the influx back to the United State of the Vietnam War surveillance gadgets alone, not to mention the behavior modification hardware, could bring about "the most effective, oppressive police state ever created" ...
http://disc.yourwebapps.com/discussion.cgi?disc=149495;article=122187;title=APFN.
•••••••
From the ITT, Van Nuys web site:

"ITT is a major supplier of sophisticated military defense systems and provides advanced technical and operational services to a broad range of government agencies."

Melcher joined ITT following 32 years of distinguished service in the United States Army. ... He served as the Army’s Military Deputy for Budget and Deputy Chief of Staff for Programs in the Pentagon, and as Commander of the Corps of Engineers – Southwestern Division in Dallas, Texas. ...

Prior to joining ITT in November 2008, Albritton was Director of Media Relations on the Corporate Public Relations team at Raytheon Company. ... Early in his career, Albritton spent 10 years as an officer in the U.S. Navy, which included service aboard USS PORTLAND (LSD 37) during Desert Shield/Desert Storm.
http://www.defense.itt.com/team_albritton.htm
Posted by Alex Constantine at 3:22 PM

Here's some additionally fascinating info on the "Manchurian Santa". Alex, I too suspected a neatly convenient programmed wind-up toy spree killer. Ever notice how all these "lone nuts"follow the same pattern (formula) which has been:

2) Military or intelligence connections within their employment, past or family.

3) Incidents take place to specifically kill, maim or injure young or vulnerable in settings where their guard is likely to be down (i.e. - malls, McDonalds, schools, parties or randomly public as in the DC Sniper case).

4) Absence for periods of time from work and or regular life that markedly departs from a known routine.

5) Most always the programming includes a suicide command as part of the action trigger. That way there are no pesky questions, interviews or trails that could betray the government sponsored underpinnings of a domestic terror black op.

6) Usually have access to travel and sudden infusions of finance well beyond their means and unexplainable by their regularly reported living income.

Anyone have any trouble digesting this? Google the name Lt. Col. Thomas J. Narut and edify yourself to the realities of engineered programmed assassins. Also read the seminal works by Alex himself (Psychic Dictatorship) or 'Operation Mind Control' by Walter Bowart. The goal of these ops is and has been to attack innocent people in vulnerable "safe" environments and too spread terror to the mass populace in the hopes of them abandoning their civil liberties in favour of overtly oppressive paramilitary and martial law measures. The formula is Reaction - Problem - Solution, with them synthetically engineering the scenarios then the media exacerbating the public panic that "no one's safe" and then the introduction of the fascist "solution" (think Reichstag fire and 9/11).

I pulled some intriguing facts of note on the Wind-Up Killer Santa from that article in the L.A. Times.

Some suspicious highlights on the case:

• Police say Bruce Jeffrey Pardo, who allegedly killed nine people while dressed as Santa, was found with $17,000 cash and a plane ticket to Canada. But burns he suffered may have changed his plans.

• Covina police said Bruce Jeffrey Pardo drove 40 miles to his brother's house in Sylmar after the rampage with third-degree burns on both arms and the Santa Claus suit melted onto his skin.

• Neighbors told police Pardo had disappeared for a time in October, but it was unclear where he had gone.

"That whole trip is a mystery to us," Doonan (*Lt. Tim Doonan of the Covina Police Department) said, adding that two detectives have been assigned full time to try and track Pardo's movements during this period.

Just wanted to include some more pretty suspicious background employment on this Bruce Jeffery Pardo character.

Police spokesman at a 12/26/2008 press conference stated also that Pardo's alleged resume read that he was also employed at "JPL" (NASA's Jet Propulsion Laboratories) from 1985-1994 and "some medical centers" (undisclosed which ones). Evidence retrieved from CNN video "Police: Burns from fire altered 'killer Santa' plan" at http://www.cnn.com/2008/CRIME/12/26/
santa.shooter.plan/index.html?iref=news
search#cnnSTCVideo.

Keep up the banner work Alex!