The FDA vs. Stevia

Letter from Betty Martini of Mission Possible in Atlanta: 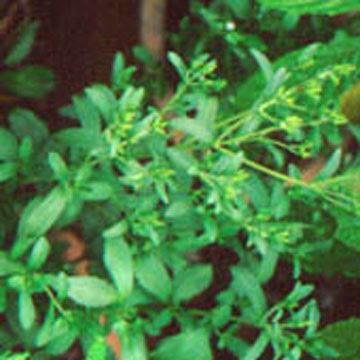 I am just as concerned about it as you are. The Stevia leaf itself is safe. Somewhere I have all the studies. The FDA based their "not safe" on a study that was in reality an experiment in animal cruelty by a student, and funded by a chemical lab in Brazil that no one could find. If you get real stevia leaf, green, its safe and healthful. However, many times additives are added to it, like in Brazil they add the poisonous excitoneurotoxic carcinogenic aspartame to it.

Coke said they heard the people and they were going to use Stevia. However, I told everyone who mentioned it, they would not replace poisonous aspartame in Diet Coke, but rather they would just make a drink that had it to gain a part of the population who knew Diet Coke was deadly. That is what has come to pass. They said they will not replace the Diet Coke. Because its addictive and a cash cow they know addicted people would change to another product that had the poison in it and keep the addiction. Also, the symptoms from aspartame would disappear and they would know it was Diet coke that poisoned them.

Earlier reports said they could manipulate the stevia or genetically engineer the product. After I first read those I knew there might be "something" from the stevia plant but it wouldn't be stevia, just some part of the plant to gain the use of part of the population.

I believe Truvia should be analyzed by independents to find out what it contains and studies done.

It says not approved by the FDA but remember that the FDA will do anything for industry, so expect it. Yes, actual stevia is GRAS but then when someone put it in tea the FDA made them take it out, and said it could only be put in herbal products because its a dietary supplement. Why a dietary supplement couldn't be put in food is absurd. It's okay to put aspartame in food and classified as an additive when its a neurotoxic drug and the medical text, Aspartame Disease: An Ignored Epidemic by H. J. Roberts, M.D., is 1000 pages of diseases, cancer, diabetes, obesity and other horrors. An additive by law has to be inert, but then the FDA doesnn't care about the law. It's okay to put Splenda in food and its a chlorocarbon poison liberating chlorine, and was found on a China site under "insecticides". They moved it over to sweeteners when we exposed it. http://www.wnho.net/splenda_chlorocarbon.htm

The FDA is just Big Pharma's Washington Branch Office. They continue to approve poisons and if anyone knows aspartame is poison its the FDA who lies to the public. They are the very ones who tried to have the company indicted for fraud and revoked the petition for approval until Donald Rumsfeld used political chicanery to get it on the market. http://www.soundandfury.tv/pages/rumsfeld.html

Also, you are exactly right about the patent. That was the first thing that made me suspicious. You cannot patent a natural product, the green stevia leaf. So they have manipulated and added to it, and who in the world would believe Coke? After all the National Soft Drink Assn (now American Beverage) wrote a 30 page protest on aspartame that was added to the congressional record. They knew it was adulterated and they mentioned what Searle did to fix the studies like not using the right test so it wouldn't pick up the aspartic acid. http://www.mpwhi.com/open_letter_dick_adamson.htm Coke and Pepsi can't hide from the fact they knew the gun was loaded. We boycott the soft drink companies for this reason. Why give them profit when they knew using aspartame would kill. That's the reason they put it in the congressional record, because after protesting they lobbied for NutraSweet with full knowledge.

The only thing I can do is agree with everything you said, doctor. Truvia has to be tested with long term studies by independent researchers, not industry. It has to be analyzed to know if this is another genetically engineered product like aspartame. Coke and Pepsi can take a good thing, pure Stevia, and make it into something that is not fit to drink It worries me that if it tastes okay people will use it, and suffer the consequences. Is it going to be addictive to add to their profit? Will they add a small amount of aspartame to it and not label it? Every question has to be answered.

I happen to live in Atlanta, home of Coca Cola. I grew up on it. It was an entirely different product and they couldn't leave well enough alone with citric acid but had to change to phosphoric acid which is cheaper. That's why many people use Coke to clean their toilets, that's what toilet bowl cleaner is, phosphoric acid. Think what it can do to the body. People ask me all the time why aspartame is still on the market with the background that is provable from the public records. I tell them for the same reason as tobacco, addiction, profit and greed. Think of the millions of babies who are
murdered in their mother's womb because aspartame is an abortifacient and teratogen, with not the decency of a warning for pregnant women. One woman drank Diet Coke through 3 pregnancies and had 3 autistic children. Do you think Coke cares? They knew it from the beginning.

I don't believe Coke and Pepsi deserve one cent of profit for participating in the mass poisoning of consumers in the US and 100 countries of the world. I think everyone should boycott them. If they would use aspartame knowing the gun was loaded, why would anyone trust Coke with Truvia. When the FDA embargoed stevia years ago to please the manufacturers of aspartame, I fought for it - fought for what is healthy, the pure green stevia leaf. I would no more put Truvia in my mouth than I would aspartame. Coke and Pepsi blew it putting profit and greed before health with aspartame. How does the
saying go, "Fool me once shame on you, Fool me twice, shame on me."

So pure stevia with no additives is fine. Just Like Sugar is safe (www.justlikesugarinc.com) made with only chicory, orange peel, Vitamin C and Calcium. Before neurosurgeon Russell Blaylock, M.D., (www.russellblaylockmd.com) would endorse it he insisted on it being analyzed. Then he wrote in his newsletter, The Blaylock Wellness Report, "Finally a safe sweetener". Until Truvia is analyzed my personal opinion is continue to boycott Coke and Pepsi who have participated in the mass poisoning of the world with full knowledge. If you just have to have a cola regardless, go to Whole Foods. They make their own with citric acid and sugar. I do believe their aluminum cans should be changed to glass. I recommend using healthy drinks instead and Whole Foods has an aisle full of them. They ban aspartame and Splenda.

Also, notice that Pepsi has teamed up with a subsidiary of Merisant. Who is Merisant, a manufacturer of aspartame!!!!!!!!!!!!!!! The public should not be fooled again. They should demand the truth and absolutely, emphatic
independent studies from unbiased researchers.