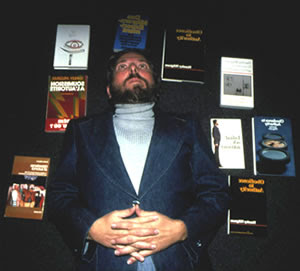 Stanley Milgram - " ... after Prof. Milgram it has become harder to pretend that people in a free society [sic] are somehow inoculated against mass wrongdoing. ... In a world of busybody [sic] ethics boards, the Milgram experiment is now considered non-reproducible. But a brave fellow at Santa Clara University named Jerry Burger has gone as far as possible. His results, just published in the journal American Psychologist, are disturbingly reminiscent of Milgram's own. ... "

It is, almost without question, the most famous psychological laboratory experiment ever conducted. The year was 1963, and Yale University's Stanley Milgram, fascinated by news coverage of the trial of Adolf Eichmann, had devised what his classic paper tersely calls "a procedure ... which seems useful as a tool for studying obedience."

Forty unwitting subjects were enrolled in a study that they were told was about "the effects of punishment on memory." Apparently chosen to be "teachers" in what was actually a rigged drawing of lots, they were ordered to ask test questions of a play-acting "learner" in another room and to administer, using a phony apparatus, what they thought were increasingly intense electrical shocks when he got questions wrong.

According to the protocol of the original experiment, which was to be repeated by Prof. Milgram many times in different variants, the "learner" was to begin beating on the walls and stop transmitting answers at an apparent shock level of "300 volts." The teachers, who were the real subjects of the experiment, were instructed to keep shocking the learner even after the pounding on the walls had ceased. The experimenter was armed with a list of increasingly urgent verbal "prods" to keep the teacher going: "It is absolutely essential that you continue," he would say, and then "you have no other choice: you must go on."

Prof. Milgram polled some undergraduates before performing the experiment; they unanimously predicted that all of the teachers, or all but a few sadists, would stop shocking the learners long before the 300-volt level.

But even though the teachers reported being convinced of the reality of the experiment, and several experienced "bizarre" laughing fits and even "full blown, uncontrollable seizures" as the apparent voltage increased, everybody obeyed the experimenter. Only five of the 40 stopped when the learner started beating on the wall. (Transcribed remarks: "The guy is suffering in there. No, I don't want to go on. This is crazy.") Four more refused to proceed after the noise stopped. ("I'm sorry, I can't do that to a man. I'll hurt his heart.") The rest kept going: Twenty-six, or more than half, continued right up to the end of the experiment, which came at "450 volts."

Prof. Milgram seemed to have unlocked a terrible secret: that almost any human is capable of frightful deeds in the presence of an authority figure. His research is still cited often in connection with the Nazis, and after Prof. Milgram it has become harder to pretend that people in a free society are somehow inoculated against mass wrongdoing.

But his experiment itself quickly became, in the eyes of some critics, a sign of scientific hubris.

Although Prof. Milgram's "teachers" were mostly grateful for the self knowledge they learned once the real nature of the experiment was disclosed, he was accused of running roughshod over the right to informed consent. Denied tenure at Yale, he would end up at CUNY, remaining prolific and controversial until his death in 1984 at the age of 51. (His last words, spoken just inside the emergency entrance of a hospital, were "My name is Stanley Milgram, and I believe I am having my fifth heart attack.")

In a world of busybody ethics boards, the Milgram experiment is now considered non-reproducible. But a brave fellow at Santa Clara University named Jerry Burger has gone as far as possible. His results, just published in the journal American Psychologist, are disturbingly reminiscent of Milgram's own.

Prof. Burger changed the experimental conditions so that the "teachers" were confronted with a single choice: whether to continue beyond "150 volts" as the learner pleaded audibly to be let out of the study. Either way, the experiment would be stopped at once, and the learner brought into the room to reassure the teacher that he was all right. With this and other safeguards in place, Prof. Burger still found that 28 of 40 teachers were willing to temporarily continue "shocking" an actor who was begging them to stop and complaining "My heart¹s starting to bother me."

This tells us, if nothing else, that the authority of a white male scientist in a lab coat remains psychically powerful in a supposedly more skeptical age -- even at a time when science is no longer looked upon as a source of national salvation from the threat of communist supermen.

Prof. Burger changed one interesting variable in the Milgram experiment: using both men and women as teachers. But there was no statistically significant difference between them. (In fact, the women were slightly more compliant.) Troublingly, he also performed a "modelled refusal" version of the experiment, whereby the teachers were made to witness an actor refusing to proceed with the shocks.

But this did not make them very much less likely to stop themselves.

Being given a "good" example of resistance to authority had, in Prof. Burger's words, "no apparent effect on obedience levels." It seems there is some deciding factor in the character that makes a few people say "No" at times when others will proceed to obey. But defining that factor, and cultivating it, remains beyond our power.

http://network.nationalpost.com/np/blogs/fullcomment/archive/2008/12/27/national-post-editorial-board-milgram-s-shock-box-revisted.aspx
Posted by Alex Constantine at 7:00 AM