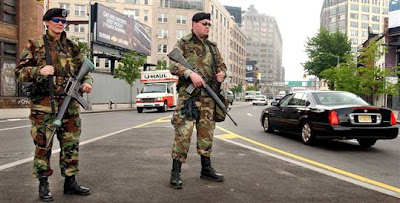 The U.S. military expects to have 20,000 uniformed troops inside the United States by 2011 trained to help state and local officials respond to a nuclear terrorist attack or other domestic catastrophe, according to Pentagon officials.

The long-planned shift in the Defense Department's role in homeland security was recently backed with funding and troop commitments after years of prodding by Congress and outside experts, defense analysts said.

There are critics of the change, in the military and among civil liberties groups and libertarians who express concern that the new homeland emphasis threatens to strain the military and possibly undermine the Posse Comitatus Act, a 130-year-old federal law restricting the military's role in domestic law enforcement.

But the Bush administration and some in Congress have pushed for a heightened homeland military role since the middle of this decade, saying the greatest domestic threat is terrorists exploiting the proliferation of weapons of mass destruction.

Before the terrorist attacks of Sept. 11, 2001, dedicating 20,000 troops to domestic response -- a nearly sevenfold increase in five years -- "would have been extraordinary to the point of unbelievable," Paul McHale, assistant defense secretary for homeland defense, said in remarks last month at the Center for Strategic and International Studies. But the realization that civilian authorities may be overwhelmed in a catastrophe prompted "a fundamental change in military culture," he said.

The Pentagon's plan calls for three rapid-reaction forces to be ready for emergency response by September 2011. The first 4,700-person unit, built around an active-duty combat brigade based at Fort Stewart, Ga., was available as of Oct. 1, said Gen. Victor E. Renuart Jr., commander of the U.S. Northern Command.

If funding continues, two additional teams will join nearly 80 smaller National Guard and reserve units made up of about 6,000 troops in supporting local and state officials nationwide. All would be trained to respond to a domestic chemical, biological, radiological, nuclear, or high-yield explosive attack, or CBRNE event, as the military calls it.

Military preparations for a domestic weapon-of-mass-destruction attack have been underway since at least 1996, when the Marine Corps activated a 350-member chemical and biological incident response force and later based it in Indian Head, Md., a Washington suburb. Such efforts accelerated after the Sept. 11 attacks, and at the time Iraq was invaded in 2003, a Pentagon joint task force drew on 3,000 civil support personnel across the United States.

In 2005, a new Pentagon homeland defense strategy emphasized "preparing for multiple, simultaneous mass casualty incidents." National security threats were not limited to adversaries who seek to grind down U.S. combat forces abroad, McHale said, but also include those who "want to inflict such brutality on our society that we give up the fight," such as by detonating a nuclear bomb in a U.S. city.

In late 2007, Deputy Defense Secretary Gordon England signed a directive approving more than $556 million over five years to set up the three response teams, known as CBRNE Consequence Management Response Forces. Planners assume an incident could lead to thousands of casualties, more than 1 million evacuees and contamination of as many as 3,000 square miles, about the scope of damage Hurricane Katrina caused in 2005.