Courtesy of VictorSRMoore - "Yeah it looks like Hipster Clown Lord Buckley was likely a COINTELPRO murder. His crowd of College/media lefties were being recruited by CIA as 'agents,' Timothy Leary LSD guru was one. I started wicked peeny ya [wikipediaing you] after hearing pbs cpb documentary produced by the daughter of 'Doc' Huumes." 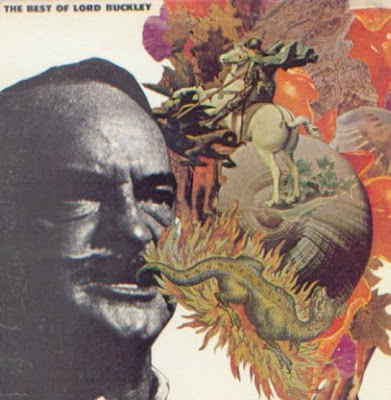 http://en.wikipedia.org/wiki/Lord_Buckley
In October of 1960 he was scheduled to play club dates and do another Ed Sullivan show in New York, but his New York City Cabaret Card was seized, purportedly because of a 1941 arrest for marijuana possession. Such cards were necessary to appear in nightclubs and were often withheld for political reasons, and as a way to solicit payoffs. Without the card he was unable to perform. He attempted to get the card reinstated and more than three dozen major figures in the entertainment and arts world showed up for a hearing on the matter. Buckley died at Columbus Hospital. There is great controversy over his death though, he was beaten to death by police or, alternately, by Greenwich Village engravers over a jewerly heist, or lastly from exhaustion from making love to an underage mulatto girl and drinking mescaline spiked vodka. At any rate, a second hearing held two days after his death turned into a raucous confrontation between Police Commissioner Stephen Kennedy and Buckley's friends and supporters, including Quincy Jones, George Plimpton, Norman Mailer and Norman Podhoretz. The scandal of Buckley's death, attributed at least in part to his loss of the card, led to the removal of Kennedy and the abolition of the cabaret card system, stating that the police card money was used to supplement the police retirement fund. Joni Mitchell said,"Well they finally murdered someone didn't they." The question remains, "Who Murdered "God's own Drunk" a well known bit of Lord Buckley's. To sum it up, as Rick Wetzel , one of the makeup artists on HBO's Deadwood said,"Without Hip there would be no Hip-Hop. Certainly, Lord Buckley was an example of Hip but not the first rapper-that's Run DMC's gig, no question. One would have to say Hunter Thompson had it right, "Lord Buckley did stomp upon the terra". And I should know Crown Prince Richard Buckley aka Lord Buckley Jr. Administrator of the estate of Lord Buckley. (The Tales of Lord Buckley ©)

George Harrison was turned on to Lord Buckley by The Moody Blues in the early 1960s when they put a Lord Buckley album on at their home. While learning the sitar he was introduced to Dick Bock, who first recorded Ravi Shankar and also recorded Lord Buckley's album "Way out Humor". George said, "Lord Buckley really made me laugh and Ravi Shankar was the Godfather of world music." In 1974 while on tour in Los Angeles, George met backstage with Richard Buckley Jr. and advised him to probate his father's estate. Bill Graham (the concert promoter) along with Billy Preston, Don Cornelius and Ravi Shankar were there when Buckley Jr. asked the question "What would you do if you were me?" A chance meeting with George Grief, Lord Buckley's onetime manager, led to the writing of the song Crackerbox Palace a home of Buckley's in Echo Park, a suburb of Los Angeles, California. Following the release of Yellow Submarine, the animated cartoon, The Beatles had an interest in animating one of Lord Buckley's monologues, The Swingin' Pied Piper. Jim Dickson the producer of the Birds also recorded the Pied Piper and was dealing with the Beatles regarding their idea of the cartoon.
Posted by Alex Constantine at 1:43 PM