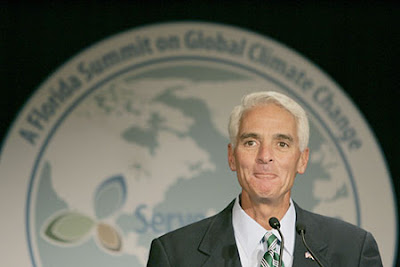 Gov. Charlie Crist, the self-proclaimed "people's governor," says he believes in open government. Yet he's not talking about a $491 million deal the state secretly struck with CSX Transportation that will benefit the railroad and the Orlando area but could adversely affect much of Polk County and communities from Plant City to Alachua.

The deal was negotiated in secret, without the knowledge of many state and local lawmakers. People whisper it's a done deal, but it will come up for final review during next year's legislative session.

So Crist still has time to prove his open-government bonafides. It's scandalous that people who deserve a say in the matter were not given the opportunity. Yet so far, Crist has ignored a large bloc of Central Florida voters and lawmakers who feel railroaded. ...

This agitation might have been avoided had Gov. Jeb Bush, the state Department of Transportation and the railroad allowed all of those affected a seat at the table during negotiations two years ago. But then Bush has a penchant for privacy and paternalism. Crist needs to bring the deal into the sunshine.

Indeed lawmakers were asleep at the switch when they appropriated the money without knowing the purpose. It makes one wonder what else might be hidden in the state budget. The language said nothing about CSX, Orlando or rail, and it was deftly hidden in an omnibus growth management bill. What irony. ...

Unfortunately, Sen. Mike Fasano, who heads the Senate committee, isn't keen on finding the answers. He told some Winter Haven opponents of the CSX hub the state doesn't get involved in local zoning issues. He conveniently ignored the fact state money will pay for the project. Shame on him.

Fortunately, the House committee is led by Rich Glorioso of Plant City, who is concerned about what increased freight traffic could do to his home town. He should demand answers to such questions as:

•What is CSX getting for our money, and why is the plan good for the state and region?

•Why should taxpayers be on the hook for the infrastructure needs of a private company?

•Why is Winter Haven the best site for the hub, and why the refusal to discuss alternative routes?

•How many jobs will be created and when?

•How much tax revenue would actually be generated for Winter Haven?

•How many freight trains can be expected to go through Lakeland every day?

Crist has the power to address the people's concerns and open the back-room doors. If this deal is good for the state, it will withstand public scrutiny. It may be that the concerns of Lakeland and other communities can be adequately addressed. But nobody has bothered to make that case to the people of Florida.

If Crist doesn't act, he'll show his promises of a more open government were meaningless.