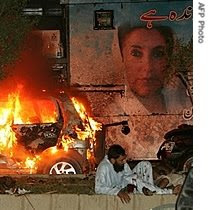 " ... The Homeland Security official said the claim was 'an unconfirmed open source claim of responsibility.' ... "
•••••••
earthtimes.org

"We terminated the most precious American asset which vowed to defeat (the) mujahedin," Al-Yazid told the news agency.

However, the claim hasn't been repeated on radical Islamist Web sites that often post claims of responsibility for attacks from al-Qaida and other groups.

The Homeland Security official said the claim was "an unconfirmed open source claim of responsibility." He said the bulletin was sent Thursday to state and local law enforcement agencies.

Ross Feinstein, spokesman for U.S. Director of National Intelligence Mike McConnell, said the U.S. intelligence community is working to discover who was behind the attack.

"We are not in a position to confirm who may be responsible," Feinstein said.