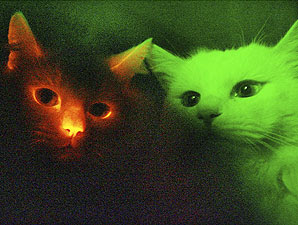 This picture taken through a special filter in a dark room, a cat, left, possessing a red fluorescent protein that makes the animal glow in the dark when exposed to ultraviolet rays, appearing next to a normal cloned cat, right.

Three Turkish Angora cats were born in January and February through cloning with a gene that produces a red fluorescent protein that makes them glow in dark. One died at birth, but the two others survived, the ministry said.

The ministry claimed it was the first time cats with modified genes have been cloned.

The development means other genes can also be inserted in the course of cloning, paving the way for producing lab cats with genetic diseases, including those of humans, to help develop new treatments, the ministry said.

“Cats have similar genes to those of humans,” said veterinary professor Kong Il-keun of Gyeongsang National University. “We can make genetically modified cats that can be used to develop new cures for genetic diseases.”

Keitaro Kato, a geneticist at Kinki University in western Japan who has cloned fish, said the research could be significant if it eventually helps treat people with hereditary diseases.

“People with genetic disorders usually have to receive treatment throughout their lives that is very hard on them,” Kato said. “If these results can help to make their lives easier, then I think it’s a wonderful thing.”

South Korea’s scientific reputation suffered a heavy blow after much-hailed stem-cell breakthroughs by scientist Hwang Woo-suk were found to be faked in late 2005. He remains on trial on fraud and other charges.

For more BAAAAD B-Movies go to my Pal Mr. Lobo at
www.CinemaInsomnia.com
and try the link to the Church of Ed Wood !

HE WAS BALD THROUGHOUT THE 1980s Fraud-Coupe Fascist Regime! Click below: