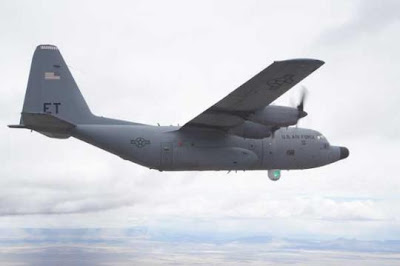 The first ray guns to be used in combat may well be aerial weapons, and not phaserlike side arms in the hands of foot soldiers.

Certainly Boeing is working in that direction. For several years it's been providing regular updates on the (notably slow) progress of its marquee directed-energy effort, the Airborne Laser, to be carried aloft by a heavily modified 747 that's intended to stop ballistic missiles during their launch phase. Now the defense contractor is touting the steps it's taking with a smaller counterpart designed to strike ground targets, the Advanced Tactical Laser.

As of this month, the high-energy chemical laser that is the actual weapons portion of the ATL is now installed in a C-130H airplane, a well-proven design taking on yet another new mission. The 12,000-plus-pound chemical laser system is taking up residence alongside a separate beam control system, installed at an earlier date, that functions as the tracking and targeting apparatus.

This would hardly be the first time that the C-130, primarily a cargo and troop transport aircraft, has functioned as a gunship. The well-armed AC-130 variant saw much action in Vietnam, and has also flown in subsequent conflicts.

The business end of the ATL will be a rotating turret in the belly of the fuselage--reminiscent of the one-squished-man ball turret of the B-17 Flying Fortress and B-24 Liberator planes used in World War II, hauntingly depicted by poet Randall Jarrell in his "Death of the Ball-Turret Gunner." By contrast, the 747-borne Airborne Laser will fire through the nose of the aircraft.

Sometime in 2008, the ATL is expected to demonstrate its prowess in flight, directing the high-energy laser at what Boeing calls "mission-representative ground targets." In tests at Kirtland Air Force Base, N.M., earlier this year, a surrogate low-power laser hit targets on more than a dozen occasions, and laboratory testing of the high-energy laser wrapped up after more than 50 firings, according to Boeing.

Aerial tests of the bigger, ballistic-missile-minded Airborne Laser are scheduled for 2009.

Boeing doesn't just have its head in the clouds when it comes to directed-energy weapons. It's also working on a more down-to-Earth Humvee-mounted laser shooter.
Posted by Alex Constantine at 1:13 PM