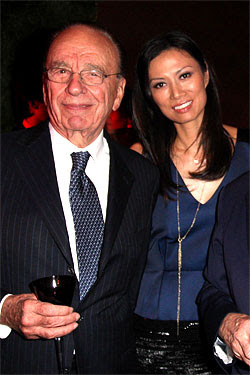 Last night's launch party for Fox Business Network had so many media and business moguls, you couldn't throw a canapé without mussing up the rug of some very important dude. Seriously, our throats were burning from inhaling the perfume of wealth and success. In one corner of the Metropolitan Museum of Art's Temple of Dendur, Liz Smith chatted with Mel Brooks and Harvey Weinstein. (Apparently, Harvey loves the channel. "I love Roger Ailes," he said, though he would not tell us what he liked the best or whether he ate Money for Breakfast.) In another corner, Oscar and Annette de la Renta greeted Regis and Joy Philbin. And kingly in the middle of it all, like a pair of samurai and their husbands, were Rupert Murdoch, Les Moonves, Julie Chen, and Rupert's wife, Wendi Deng. "Wendi, we love your bracelets!" we cried in unison, suddenly morphing into Blair's sidekicks in Gossip Girl. "They were only twenty dollars," she exclaimed. Wow, we thought. Wendi is so down-to-earth! "But this wasn't," she laugh-cackled, flashing us her index finger, which was adorned with what looked to be the actual Hope Diamond.

Fortunately, Jimmy Lee, the CEO of J.P. Morgan, stepped in before we burned out our eyes staring at it. "You're fabulous!" he told Wendi, and air-kissed her. Steve Schwarzman was briefly received. Then we had Wendi all to ourselves again. "You're so young," she cooed to us. "No, you're so young," we said, and we didn't even accidentally add, "compared to your husband."

Speaking of! Wendi dragged us over to introduce us to Rupert. He has large, soft hands. "We TiVo-ed the first morning of [FBN]," he told us. "We have to get it in more homes. We're not going to worry about every penny." Wow, that's an amazing revelation. Rupert knows what a penny is? Do the Deng-Murdochs do other common-people things? Like, who do they hang out with? We asked Wendi who her best friend is in New York. "Well, I work out with Ivanka," she started. Funny. We'd heard they were friends.

But then it was time for the speeches. Fox Business mastermind Roger Ailes introduced Rupert Murdoch on the podium. "This temple was built in 15 B.C. by Cesar Augustus," Ailes said, gesturing expansively. "He was the Rupert Murdoch of his day." Oh, Roger. "Rupert Murdoch is so casual. One day he said to me, 'You know CNBC needs competition.' I said, 'Uh-oh.' Because I was around when he said, 'CNN needs some competition.'" Then Rupert came up and talked Australianly and then he introduced the Counting Crows, which was weird.

Near the stage, J-Vanka bobbed their heads to the music, and the young, hot Fox Newsies swayed giddily. Even the oldies kind of got down. We cornered Ailes and told him that against our better judgment, we sort of loved the channel. "You guys were the only people that weren't surprised that we hired attractive people!" he laughed. We laughed too, because that's what you do when media moguls display emotion while talking to you — you mimic it. It's like a survival strategy. Though by the time we got around to talking to Jared Kushner, we found his disdain for us a little too complicated to imitate.