The Geopolitical Theorist who Gave us PNAC, 9/11, Office of Special Plans, the Iraq Invasion, etc.

Ray Cline died in 1996 - not much thought is given to his enormous influence on the present.

Dr. Cline of the Center for Strategic and International Studies was one of the three most important geopolitical strategists in history.

His primary contribution is the realization - founded upon a complex mathematical model - that the United States will not maintain control of the world forever. According to Cline's math, China and Russia will, at some time in this century, pass the US by and come to dominate the world's resources.

To allay this transfer of power, or at least to dampen its effects, Cline maintained that America needs to maintain control of 17 key points on the globe - not all of the land, sea and air as Nazi geopolitcal strategist Karl Haushofer maintained ...

So Bush insisted on war with Iraq - it was inevitable, the core covert agenda written by Dr. Cline - a Neo-Cons' geopolitical muse. But Iraq is only indirectly critical to American hegemony in the Middle East - the key point of interest in the world is Saudi Arabia and ITS oil supply, not Iraq's. This is why we maintain an impossible amiable relationship with the Saudis, and turn Iraq next door into an armed camp. In Iraq, the US military is setting itself up as sentry over the region because Dr. Cline did his math ...

Cline's work gave rise to the Project for the New American Century, a CSIS spin-off.

Here is some background on Dr. Ray Cline, who has determined many of the foreign policy travesties of the Bush administration., and whose immense influence has largely gone unrecognized. He was a seminal figure in the globalization process:

"Professor Cline's study was undertaken in the wake of Vietnam and the Arab oil shock. It was a period when 'the U.S. finds itself in a state of markedly diminished influence and strategic confusion.'

"Cline's model was an attempt to quantify the overall power of 50 nations of the world comprising 90 percent of the world population at the time. The variables measured for each nation were: population, territory, economic capability, military capability, strategic purpose and the will to pursue national strategy.

"Cline's conclusion was in order to contain the totalitarian threat the U.S. needed to form a limited system of core alliances patterned after the Athenian League. He then proceeded to outline the make up of this new 'Oceans Alliance' based on a calculation of perceived power. If it could have been attained the 'Oceans Alliance' would have contained 26 nations possessing 70 percent of the perceived power at the time, and thus, would have successfully contained the foe.

"Of course, the development of geopolitical theories did not come to a halt in the 1970s with the ideas of Professor Cline, but rather the development was radically changed by the growth of something called globalization and the end of the cold war. In order to understand the current word scene we must explore, at least briefly, how these events impacted the times. ... " 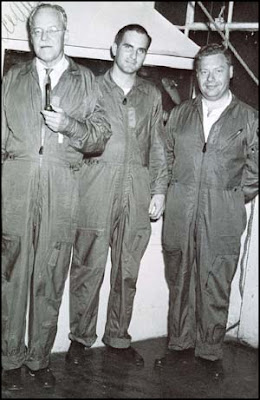 Ray Steiner Cline was born in 1919. He studied at Harvard University before joining the Office of Strategic Services during the Second World War. In 1944 he was appointed as Chief of Current Intelligence. Later he was sent to China where he worked with John K. Singlaub, Richard Helms, E. Howard Hunt, Mitchell WerBell, Paul Helliwell, Robert Emmett Johnson and Lucien Conein. Others working in China at that time included Tommy Corcoran, Whiting Willauer and William Pawley.

In 1946 Cline was assigned to the Operations Division of the War Department General Staff to write its history. Cline joined the Central Intelligence Bureau in 1949 and eventually became Chief of the Office of National Estimates. He also served in Britain (1951-53) under Brigadier General Thomas Betts. Cline became Chief of station in Taiwan in 1957. A post he held for over four years.

In 1962 Cline was appointed as Deputy Director for Intelligence for the CIA. He became disillusioned with Lyndon B. Johnson and he requested a move from Washington. In 1966 Richard Helms managed to arrange for Clines to become Special Coordinator and Adviser to the Ambassador in the U.S. Embassy in Bonn. From 1969 until his retirement in 1973, he was Director of the Bureau of Intelligence and Research at the Department of State during the Richard Nixon administration.

Cline played an important role in the forming of right-wing organizations such as the World Anti-Communist League and its U.S. chapter, the U.S. Council for World Freedom.

In his book The Power of Nations in the 1990s: A Strategic Assessment (1995): "Americans must at long last face up to geopolitical verities. It is easy to recognize that the United States and the whole Western Hemisphere are outclassed by the great Eurasian-African landmass in terms of territory, economic resources, and population. To maintain access to resources and friends, Americans must have bases abroad, air power, and, above all, the mobility and power of a superior three-ocean navy."

Ray Cline was a founding member of the Committee on the Present Danger, an anti-Soviet group that promoted the policy of containment militarism. Cline served on the board of the Consortium for the Study of Intelligence, a decade-long project of the military strategy think tank, the National Strategy Information Center (NSIC). (16) Cline was also a close associate of Maj. Gen. John K. Singlaub and was involved with the activities of Singlaub's U.S. Council for World Freedom and its parent organization, the World Anti-Communist League.