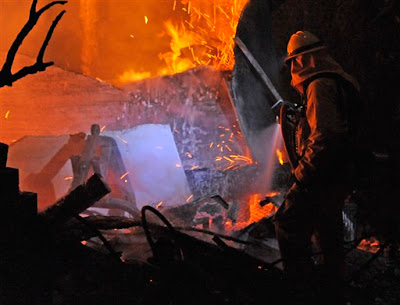 SANTA BARBARA, Calif. — Investigators say the fire that destroyed more than 200 homes in Santa Barbara and Montecito was "human caused."

Doug Lannon, a spokesman with the California Department of Forestry and Fire Protection, said Sunday that investigators have eliminated all accidental causes of the fire.

The fire began Thusday night in a Montecito landmark called the Tea House. Lannon said the area is a popular hangout for teenagers, and it's possible someone was smoking in the brush or started a campfire there.

Investigators have not ruled out arson as a possible cause. They've set up an anonymous tip line in hopes of getting the public's help in finding out what happened.

The fire burned 1,940 acres and is 80 percent contained.
Posted by Alex Constantine at 8:31 AM