“ ... 'Whether there was some broader conspiracy and what it might have consisted of, are matters I have determined to leave to future generations,” Holsinger said.' ... "

Slain congressman to be honored
By Dana Yates
www.smdailyjournal.com

One day before the 30th anniversary of the assassination of Leo. J. Ryan, officials will gather in front of the downtown San Mateo post office to rename the building after the late congressman and schoolteacher. 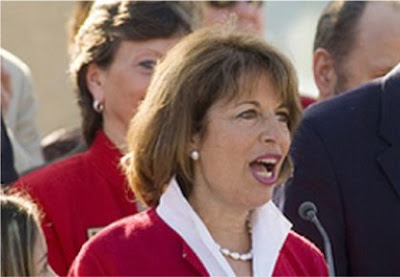 The announcement of the renaming was made yesterday. It’s the latest in a long-standing tradition remembering a man who represented the local congressional district and experienced first-hand the troubles facing our society in the 1960s and 1970s. Two former aides, Burlingame attorney William Holsinger and U.S. Rep. Jackie Speier, D-San Mateo, spoke this week about Ryan’s assassination at Jonestown in Guyana.

“I have just a sense of wonder when I think what would have happened if he wouldn’t have gone down to Guyana,” Holsinger said.

Ryan was assassinated in the jungles of Guyana on Nov. 18, 1978. He was on a trip to Jonestown investigating the People’s Temple led by the Rev. Jim Jones. With him was a delegation of journalists, concerned family members and Ryan’s staff, including Speier, a young congressional aide at the time. '

Speier was shot five times and lived — she still has a bullet lodged in her body. However, Ryan and four others were shot dead as the group tried departing the Port Kaituma airstrip with defectors from the temple. Later that day, more than 900 followers of Jones committed suicide by drinking punch laced with cyanide [false - 70 percent of the victims were injected with a lethal poison, the remainder were shot. The media cover story should not be perpetuated. - AC].

While Speier’s story is well known, Holsinger waited 30 years to speak of his experience.

Holsinger was among Ryan’s top choices of legal professionals to travel with him to Guyana. Holsinger’s father, a close friend of Ryan’s, forbid it, Holsinger said.

Speier was chosen to go instead, Holsinger said, and Ryan went to Guyana. He brought journalists to document the trip.

“Leo Ryan was very clear that he thought the presence of the press would deter any thoughts of violence that Jim Jones and members of the People’s Temple might have. Ironically, the press thought Leo’s presence would provide the same assurance of safety,” Holsinger said.

None of that mattered when gunshots rang out in Guyana.

Holsinger was at home in San Francisco with his toddler son when he received word from his father, a longtime Ryan friend. He was asked to immediately travel to Ryan’s district office to help a local staff in shock, he said.

The day of the fatal shooting, a member of the People’s Temple left threatening telephone messages for Holsinger, telling him that “his meal-ticket just had his brains blown out.” It was not until the next day that officials arrived at the jungle airstrip and determined that Ryan had indeed had a part of his head blown off at point blank range, Holsinger said.

Holsinger returned to the area for Ryan’s funeral, where he was asked to wear a bulletproof vest. The Holsingers never returned to their San Francisco home and chose to immediately move to Foster City.

“Whether there was some broader conspiracy and what it might have consisted of, are matters I have determined to leave to future generations,” Holsinger said.

Ryan telegraphed civic duty, Holsinger said. While in the Assembly, he went to Watts after the 1965 riots to work as a substitute high school teacher and, five years later, had himself arrested and booked into Folsom Prison to study conditions there. Shortly before his fateful Guyana trip, he and another congressman joined a Greenpeace mission to Newfoundland to document the slaughter of baby harp seals.

Leo Ryan taught government at Capuchino High School and served on the South San Francisco City Council and California Assembly before his election to Congress. He represented San Mateo County in the U.S. House of Representatives from 1971 until his death at Jonestown, Guyana on Nov. 18, 1978.

Three decades after Ryan’s death, Holsinger still wonders how political life on the Peninsula would be different if he lived. Holsinger’s father, Joe Holsinger, ran to fill Ryan’s seat during a special election following his assassination. Joe Holsinger lost to Bill Royer. Later, Tom Lantos would take the seat from Royer and remain in the seat for more than 27 years.

Holsinger also wonders how Speier’s political aspirations would have changed if she had not worked for Ryan, traveled to Guyana and cheated death.

She was later elected as the youngest member of the San Mateo County Board of Supervisors, served in the state Senate and was recently elected to Congress in the seat formerly held by Ryan and Lantos.

“Not a day goes by that I do not think of Leo Ryan,” Speier said in a press release yesterday. “Now, future generations will be reminded of his legacy when entering this post office. If just one young person is inspired enough by his story to pursue a career in public service, that would be a fitting tribute to this good and noble man.”