Please note that Nazi Collaborator Obama has allowed John Brennan to misrepresent his criminal record, has said nothing to counter the flagrant lies of Tenet's former right-hand man. Brennan's denial feeds the Murdoch-led perception that "liberal groups" who oppose his appointment as DCI are capricious ignoramuses given to arbitrary finger-pointing ... 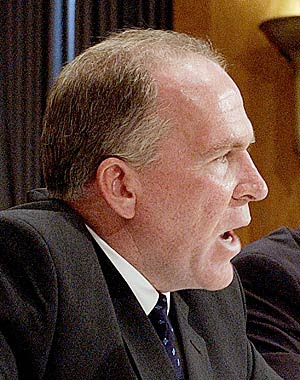 " ... As a company man, Brennan was quick to justify and support what was done. As an ‘independent’ analyst for broadcast journalists, he also provided support and cover for practices from waterboarding to the use of psychotropic drugs. ... On December 5, 2005, Brennan appeared on The News Hour with Jim Lehrer in which he said of rendition, "I think it's an absolutely vital tool.' ... "

Did Brennan Withdraw His Name from Consideration for CIA Post Before Obama Could Withdraw it For Him?

John Brennan, a former CIA official and adviser to President-elect Barack Obama, withdrew his name from consideration from "a position within the Intelligence Community" in the Obama administration Tuesday.

Sources say Brennan was under consideration for director of the Central Intelligence Agency, where he’d worked for 25 years, though it doesn't seem that the process was particularly far along.

Brennan had been a top aide to former CIA Director George Tenet during what critics of the Bush administration refer to as that agency’s descent into darkness post 9/11, and he had spoken in favor of various controversial counterterrorism strategies, including enhanced interrogation techniques and rendition – sending terror suspects to allies where torture is legal. He had become a lightning rod for criticism among commentators such as human rights attorney Scott Horton, and bloggers like Andrew Sullivan and Glenn Greenwald.

"This is a decision and an action that he made," a source on the Obama Transition Team tells ABC News.

The criticism from liberal groups and blogs was growing "and he felt it was becoming insurmountable."

In a letter released to the media, apparently by Brennan or someone operating on Brennan’s behalf, the former CIA official wrote, "It has been immaterial to the critics that I have been a strong opponent of many of the policies of the Bush Administration such as the preemptive war in Iraq and coercive interrogation tactics, too include waterboarding. The fact that I was not involved in the decision making process for any of these controversial policies and actions has been ignored. Indeed, my criticism of these policies within government circles why I was twice considered for more senior-level positions in the current Administration only to be rebuffed by the White House."

Brennan wrote that the challenges for the U.S. are "too daunting" and the role of the CIA "too critical for there to be any distraction from the vital work that lays ahead."

Stephanie Cutter, a spokeswoman for the Obama transition team, said on Tuesday: "The president-elect accepts his decision to withdraw from consideration for a position in the intelligence community but he is grateful for John’s continuing assistance as a valuable member of our transition team."

Critics included human rights attorney Scott Horton, who wrote this week that nominating Brennan "would draw heavy fire from some of Obama’s most loyal supporters. Indeed, there might well be enough concentrated firepower there to defeat the nomination in the Senate."

Horton wrote that Brennan’s "critical shortcoming" is "his completely ambiguous and inconsistent views about the CIA’s use of torture and torture by proxy as techniques. As a company man, Brennan was quick to justify and support what was done. As an ‘independent’ analyst for broadcast journalists, he also provided support and cover for practices from waterboarding to the use of psychotropic drugs. … If Obama wants to convince the world of his commitment to end this national nightmare, then he must appoint a Director of Central Intelligence who can believed when he says ‘we do not torture.’ Both of the last two directors made this statement and lied through their teeth."

In addition, this week, a group of psychoanalysts wrote to President-elect Obama saying that as people who have "long opposed the abuses of detainees under the Bush administration" they were heartened by Obama’s declaration on 60 Minutes that "America doesn’t torture, and I’m gonna make sure that we don’t torture."

That said, added the shrinks, "We are concerned, however, by reports that you may appoint John Brennan as Director of the CIA. Mr. Brennan served as a high official in George Tenet’s CIA and supported Tenet’s policies, including ‘enhanced interrogations’ as well as ‘rendition’" to torturing countries. According to his own statements, Mr. Brennan was a supporter of the ‘dark side’ policies, wishing only to have some legal justification supplied in order to protect CIA operatives."

"In order to restore American credibility and the rule of law," the docs said, "our country needs a clear and decisive repudiation of the ‘dark side’ at this crucial turning point in our history. We need officials to clearly and without ambivalence assert the rule of law. Mr. Brennan is not an appropriate choice to lead us in this direction. The country cannot afford to have him as director of our most important intelligence agencies. As psychologists and other concerned Americans, we ask you to reject Mr. Brennan as Director of the CIA. His appointment would dishearten and alienate those who opposed torture under the Bush administration."

Critics cited Brennan interviews to make their points. There was, for instance, a March 8, 2006 Frontline interview in which Brennan, trying to explain Tenet’s views, said, "I think George [Tenet] had two concerns. One is to make sure that there was that legal justification, as well as protection for CIA officers who are going to be engaged in some of these things, so that they would not be then prosecuted or held liable for actions that were being directed by the administration. So we want to make sure the findings and other things were done probably with the appropriate Department of Justice review."

In November, 2007, Brennan told CBS News' Harry Smith that "the CIA has acknowledged that it has detained about 100 terrorists since 9/11, and about a third of them have been subjected to what the CIA refers to as enhanced interrogation tactics, and only a small proportion of those have in fact been subjected to the most serious types of enhanced procedures. ... There have been a lot of information that has come out from these interrogation procedures that the agency has in fact used against the real hard-core terrorists. It has saved lives. And let's not forget, these are hardened terrorists who have been responsible for 9/11, who have shown no remorse at all for the deaths of 3,000 innocents."

On December 5, 2005, Brennan appeared on The News Hour with Jim Lehrer in which he said of rendition, "I think it's an absolutely vital tool. I have been intimately familiar now over the past decade with the cases of rendition that the U.S. Government has been involved in. And I can say without a doubt that it has been very successful as far as producing intelligence that has saved lives."

Brennan, it should be noted, continues to work on the Obama Transition Team and though he removed his name from consideration for an Intelligence job, there’s nothing to say he won’t land a spot in the Obama administration.

http://blogs.abcnews.com/politicalpunch/2008/11/did-brennan-wit.html
Posted by Alex Constantine at 9:07 AM