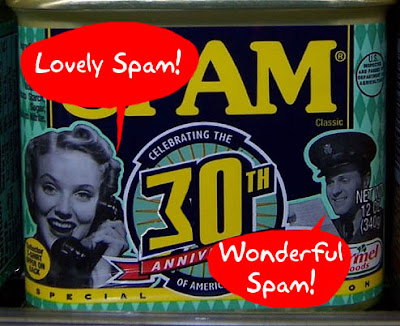 " ... While its gleaming, state-of-the-art, 30-story office tower in downtown San Jose, Calif., hardly looks like the staging ground for what could be called a full-scale cyber crime offensive, security experts have found that a relatively small firm at that location is home to servers that serve as a gateway for a significant portion of the world's junk e-mail. The servers are operated by McColo Corp. ... Global Crossing*, a Bermuda-based company with U.S. operations in New Jersey, [was] one of the two companies providing Internet connectivity to McColo ... "
•••••••
* Global Crossing Announces Third Quarter 2008 Financial Results - Nov. 5, 2008: "Consolidated revenue grew 12 percent year over year and 2 percent sequentially to $667 million. ... "
•••••••
Spam Drops After Internet Providers Disconnect a California Hosting Firm
By Brian Krebs
washingtonpost.com
November 12, 2008

The volume of junk e-mail sent worldwide dropped drastically today after a Web hosting firm identified by the computer security community as a major host of organizations allegedy engaged in spam activity was taken offline, according to security firms that monitor spam distribution online.

While its gleaming, state-of-the-art, 30-story office tower in downtown San Jose, Calif., hardly looks like the staging ground for what could be called a full-scale cyber crime offensive, security experts have found that a relatively small firm at that location is home to servers that serve as a gateway for a significant portion of the world's junk e-mail.

The servers are operated by McColo Corp., which these experts say has emerged as a major U.S. hosting service for international firms and syndicates that are involved in everything from the remote management of millions of compromised computers to the sale of counterfeit pharmaceuticals and designer goods, fake security products and child pornography via email.

Spamcop.net, another spam watch dog, found a similar decline, from about 40 spam e-mails per second to around 10 per second. (See their graphic representation here.)

Officials from McColo did not respond to multiple e-mails, phone calls and instant messages left at the contact points listed on the company's Web site. It's not clear what, if anything, U.S. law enforcement is doing about McColo's alleged involvement in the delivery of spam. An FBI spokesman declined to offer a comment for this story. The U.S. Secret Service could not be immediately reached for comment.

Also unclear is the extent to which McColo could be held legally responsible for the activities of the clients for whom it provides hosting services. There is no evidence that McColo has been charged with any crime, and these activities may not violate the law.

Mark Rasch, a former cyber crime prosecutor for the Justice Department and managing director of FTI Consulting in Washington, D.C.,. said Web hosting providers are generally not liable for illegal activity carried out on their networks, except in cases involving copyright violations and child pornography.

In the case of child pornography, providers may be held criminally liable if they know about but do nothing to eliminate such content from their servers. For example, in 2001, BuffNET, a large regional service provider in Buffalo, N .Y., pleaded guilty to knowingly providing access to child pornography because the company failed to remove offending Web pages after being alerted to the material.

Rasch said liability in such cases generally hinges on whether the hosting provider is aware of or reasonably should have been aware of the infringing content.

"It's a little bit like a landlord who owns a building and sees people coming in and out of the apartment complex constantly at all hours and not suspecting their may be drug activity going on ," Rasch said. " There are certain things that raise red flags, such as the nature, volume, source and destination of the Internet traffic, that can and should raise red flags. And to have so many third parties looking at the volume and content from this Internet provider saying 'This is outrageous,' clearly the people doing the hosting should know that as well."

Global Crossing, a Bermuda-based company with U.S. operations in New Jersey, which was one of the two companies providing Internet connectivity to McColo, declined to discuss the matter, except to say that Global Crossing communicates and cooperates fully with law enforcement, their peers, and security researchers to address malicious activity.

Benny Ng, director of marketing for Hurricane Electric, a Fremont, Calif., company that was the other major Internet provider for McColo, took a much stronger public stance, upon receiving information about this investigation from washingtonpost.com

We shut them down," Ng said. "We looked into it a bit, saw the size and scope of the problem [washingtonpost.com was] reporting and said 'Holy cow!' Within the hour we had terminated all of our connections to them."

Paul Ferguson, a threat researcher with computer security firm Trend Micro, said despite the apparently unilateral actions by McColo's Internet providers, his opinion is that U.S. authorities should have been examining McColo and its customers for a long time.

"There is damning evidence that [McColo's] activity (allegedly hosting purveyors of spam) has been going on there for way too long, and plenty of people in the security community have gone out of their way to raise awareness about this network, but nobody seems to care," Ferguson said."

Multiple security researchers have recently published data naming McColo as the host for all of the top robot networks or "botnets," which are vast collections of hacked computers that are networked together to blast out spam or attack others online. These include SecureWorks, FireEye and ThreatExpert.

Reports by Joe Stewart, director of malware research for Atlanta-based SecureWorks, said that these known botnets: Mega-D, Srizbi, Pushdo, Rustock and Warezov, "have their master servers hosted at McColo.

Stewart said he has complained to McColo several times about botnets operating out of the company's servers, and each time, he said, the company claimed it was addressing the problem. But according to Stewart, they did so by just moving the offending Web sites to a different section of their network.

"McColo runs a service that offers its clients quite a bit more protection from takedowns than the average Web host," Stewart said. "If they get abuse complaints they will try to appease whoever is complaining, but the end result is usually they just end up moving their Internet addresses around."

Collectively, these botnets appear to be responsible for sending roughly 75 percent of all spam each day, according to the latest stats from Marshal, a security company in the United Kingdom that tracks botnet activity.

Hanna said McColo has for years hosted botnet and other suspicious activity, and that it has a reputation as one of the most dependable players in the so-called "bulletproof hosting" business, which are Web servers that will remain online regardless of complaints.

"These are serious issues, almost all relating to the very core of spammer infrastructure," he said.

Researchers have found that on any given day, about half of all spam sent through the top botnets are ads for male enhancement products and other knockoff designer drugs, with a fair number of the online pharmacy sites linked in spam messages that were hosted at McColo.

Last month, the Federal Trade Commission convinced a U.S. district court to seize the assets of an international spam network selling counterfeit prescription drugs, a network Spamhaus identified as the largest "spam gang" in the world. The spammers allegedly used the Mega-D botnet, which is capable of sending 10 billion e-mail messages each day.

Jart Armin, a private security researcher who documented the activity at McColo in a report published today, said McColo is currently hosting at least 40 different child pornography Web sites or sites that collect payment for the illicit content -- and that traffic analysis showed that one of the sites garnered between 15,000 and 25,000 visitors each day.

Ian Amit, director of security research for Aladdin Knowledge Systems, an Israeli security intelligence firm, said cyber criminals have for many months used servers at McColo to manage Web sites that push out new versions of the "Torpig," or "Sinowal" Trojan horse program, which is widely considered one of the stealthiest and most sophisticated families of malicious software in existence today.

In October, RSA FraudAction Research Lab learned a single cyber crime group has used the Torpig Trojan to steal more than a half million bank, credit and debit card accounts from infected PCs over the past two-and-a-half years.

Amit said he found that recent Torpig attacks were being coordinated out of a Web server in Florida, which in turn was controlled by a VPN server running at McColo. Aladdin's findings were mirrored by those of researchers at iDefense, a security firm in Sterling, Va.

"We traced back the management connections, and found that the criminals were logged into the attack server in Florida using connections from McColo," Amit said.

Over the past year, media attention paid to Internet service providers and hosting companies that were profiting from cyber crime activity forced two of the most notorious networks underground or off the Web entirely.

Late last year, stories published by washingtonpost.com and elsewhere about criminal activity and child pornography at the St. Petersburg based Russian Business Network (RBN) caused the hosting company's upstream Internet providers to cease routing traffic for the company. The same thing happened in September, when upstream Internet providers pulled the plug on Northern California based Intercage following media reports about the level of cyber-crime activity emanating from its network.

But some security experts worry that if major Internet providers similarly shun McColo, it will only make the criminals and their activities harder to track and to block. Stewart, of SecureWorks, notes that in the case of the RBN, the company's clients didn't really go away, but instead simply dispersed their operations to less concentrated areas of the Internet.

"Everything will just be more spread out and harder to mitigate," Stewart said. "We rather like knowing where the bad activity is coming from, so protecting our networks is easier."

Jon Praed, founder of the Internet Law Group in Arlington, Va., and an attorney who has pursued spammers in cases filed by some of the nation's largest ISPs, said many security companies do not want safe havens to go away because it merely forces those companies to work harder to find the cyber-crime intelligence that powers their businesses. What's more, he said, if enough Internet providers begin severing ties with known sources of illegal activity, the cyber-criminal groups will be increasingly forced into a smaller number of areas on the Internet, ultimately increasing their costs and making them easier to isolate, identify and block.

"Good network providers are going to have to step up and separate themselves from these providers who are increasingly depedent on criminal operations," Praed said. "The fact that McColo, a virtual den of iniquity, is able to survive into 2008 in the United States is a willful sign that we haven't yet begun the job of driving these operations to places where we can begin to curtail their existence."