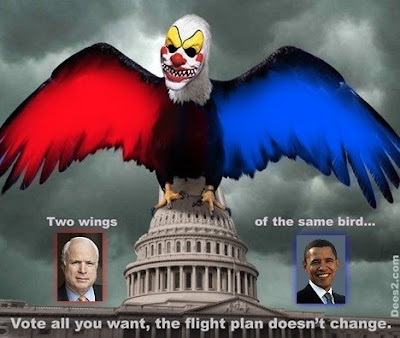 " ... On a positive note hinting that the domestic crimes of Bush are not entirely forgotten, John Brennan, who supported extraordinary rendition and warrantless wiretapping, withdrew from the race for CIA chief. ... Larry Summers ... will head the National Economic Council -- the president's senior economic adviser. This looks ominous. It was Summers who forced through the deregulation of financial markets in the 1990s and imposed disaster capitalism on Russia. Considering that he is a chief architect of the current financial meltdown, we should be wondering why Obama isn't preparing an arrest warrant for him, ... "

Disappointment follows disappointment with each "new" face, bemoans Eric Walberg, but there is a sort of silver lining

Yes, we mustn't expect too much. We all know it is the establishment that comes first in United States politics. Obama's presidency could easily be sabotaged by the powers that put him there.

But still. He would never have made it past the first, obscure primary without his army of selfless, grassroots activists, and his coffers were first filled by millions of small, personal donations. Surely these are the people he should honour with at least a few names. Even Clinton had his Health and Human Services Secretary Donna Shalala (at least until she was tarred and feathered by the right). Obama's one token progressive appointment was Melody Barnes of the Center For American Progress, who was chief counsel to Senator Edward Kennedy, and will head the toothless Domestic Policy Council.

Not one of the 23 Senators and 133 House Representatives who voted against the war in Iraq are on his transitional team or even on a short-list for an important post in his Cabinet. The only promise that might be kept is to close Guantanamo, though he could hardly do less. The entire US legal establishment seems to be pushing to end this outrage.

Keeping on uberhawk Robert Gates as secretary of war, despite the continued slaughter in Iraq and Afghanistan under his capable mismanagement, his uncompromising position on missiles for Poland, and his shady past (including Iran-Contra) gives little cause for hope. Russia can probably kiss improved relations with the US good-bye. It looks like there will be neocon policy as usual. Hillary Clinton as secretary of state just confirms this.

Yes, everyone in Washington is solidly Zionist, so Rahm Emanuel's devotion to Israel hardly changes much, as James Zogby argues. But, how is it he served with the Israeli Defence Forces -- during a war -- and yet never served with the US military? As an American, if he did this for any other country but Israel, he would have been arrested and his political career over at once. Instead, he is honoured with the key role of the president's chief of staff.

On a positive note hinting that the domestic crimes of Bush are not entirely forgotten, John Brennan, who supported extraordinary rendition and warrantless wiretapping, withdrew from the race for CIA chief. Still, no criminal charges against those who authorised or conducted torture during the Bush years are foreseen.

As Bloomberg notes, almost half the people on the Transition Economic Advisory Board "have held fiduciary positions at companies that, to one degree or another, either fried their financial statements, helped send the world into an economic tailspin, or both." This includes, for example, Anne Mulcahy and Richard Parsons, both of whom were Fannie Mae directors when the company fudged accounting rules. Mulcahy and Parsons were executives of their respective companies, Xerox and Time Warner, and were charged with accounting fraud by the Securities and Exchange Commission. 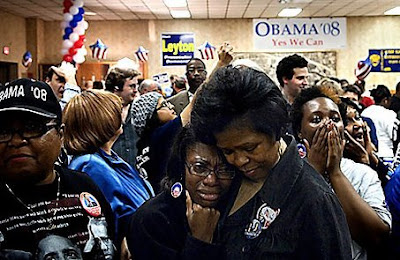 Also on this team is Robert Rubin, who as Bloomberg notes, was "chairman of Citigroup's executive committee when the bank pushed bogus analyst research, helped Enron cook its books, and got caught baking its own. He was a director from 2000 to 2006 at Ford, which also committed accounting fouls and now is begging Uncle Sam for Citigroup-style bailout cash."

Larry Summers, who was Clinton's treasury secretary, will head the National Economic Council -- the president's senior economic adviser. This looks ominous. It was Summers who forced through the deregulation of financial markets in the 1990s and imposed disaster capitalism on Russia.

Considering that he is a chief architect of the current financial meltdown, we should be wondering why Obama isn't preparing an arrest warrant for him, instead of offering him the most powerful economic role in the world. As chief economist for the World Bank, Summers wrote a memo saying the WB should actively encourage the dumping of toxic waste in developing countries, particularly "under- polluted countries in Africa," since poor people in developing countries rarely live long enough to develop cancer, making him a particularly bizarre appointment for Obama. This contradiction will be interesting to watch unfold.

Summers, Timothy Geithner as treasury secretary, and Peter Orszag as budget director are all protégés of Robert Rubin, who held two of their jobs under President Bill Clinton. All three advisers are believers in what has been dubbed Rubin-omics: balanced budgets, free trade and financial deregulation, a combination that supposedly was responsible for the prosperity of the 1990s.

But times have changed since then. Rubin is facing questions about his role as director of Citigroup, which is the benefactor of the government's latest bailout. Obama has pledged to introduce an era of re-regulation. Instead of balancing budgets, Obama plans a two-year fiscal stimulus worth hundreds of billions of dollars to aid the jobless, states and cities. "Everyone recognises that we're looking at deficits of considerable magnitude," said Jared Bernstein, an economist at the liberal Economic Policy Institute. "Whether it's Bob Rubin, Larry Summers or the most conservative economist, that is a widely shared recognition."

The list of establishment appointees to his transitional team devoted to "change" goes on and on, begging the question: Is this really the best he could come up with? How about Nobel prize winners Joseph Stiglitz and Paul Krugman, or James K Galbraith, for starters? Someone who represents labour such as Arlene Holt Baker, executive vice president of the AFL-CIO? Something to suggest that change is really what this administration is about?

Remember Obama's Bush moment, as they enthused about Bush's bailout bill. Others, such as Senator Russ Feingold, realised the bill's problems and voted against it. Feingold said that the Wall Street bailout legislation "fails to reform the flawed regulatory structure that permitted this crisis to arise in the first place. And it doesn't do enough to address the root cause of the credit market collapse, namely the housing crisis. Taxpayers deserve a plan that puts their concerns ahead of those who got us into this mess." Feingold was right. In short, Obama promised "Change we can believe in," but it's looking a lot more like "Business as usual."

So far the only black to be appointed to a senior post is former deputy attorney general Eric Holder, will be attorney general. He is best known as the Chiquita Bananas lawyer who approved of president Bill Clinton's pardon for Marc Rich, the blatantly corrupt financier whose former wife, Denise Rich, had contributed heavily to Clinton's presidential library.

Despite the extreme disappointment that many are now experiencing, there are a few straws to grasp at. Emanuel was forced to apologise publicly for his father's now legendary anti-Arab remark about mopping floors in the White House, and this incident will act as a bell-weather for anti-Arab policies. Is this, plus the appointments of Gates, Summers and Clinton possibly a wily Obama "keeping his enemies close"?

Despite the inexorable march of the empire with a black commander-in-chief at the helm, at least the Cabinet is filled with competent people, some -- like Clinton-- with considerable authority and prestige around the world. Holder seems to be genuinely against torture and hostile to the concept of the imperial presidency. Obama himself is intelligent and will not have circles spun around him as did Bush, nor will he take five- week vacations and rely on comic book memos for snap decisions to go to war.

Despite his team's credentials as Rubin-omists, they are hard at work on a huge fiscal stimulus package and further tightening of government regulations on banks and the financial sector. Conservation and the long-overdue move away from fossil fuels are high on the agenda. These bureaucrats are not fools (like Bush, Rice and many others in the current administration), and taking a leaf from president Franklin Roosevelt's New Deal administration, will not be afraid to borrow from the liberal handbook as the need arises.

It seems the only thing we can truly feel some exhilaration for at this point is the fact that Obama's father was a black Muslim and his mother an altruistic humanitarian who truly loved other cultures and devoted her life to better understanding among peoples. Let us hope for some sign that their spirit lives on in their son to help fight off the demons who surround him at present. Perhaps a good old- fashioned African exorcism is in order.