Roland Carnaby Update: On-Scene Police Supervisor has a Record of Prior Disciplinary Actions 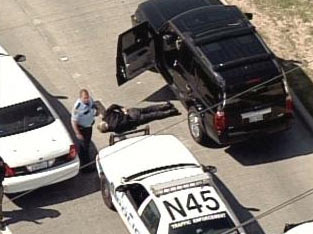 Also see: "Roland Carnaby Update: The Officers who Shot him have Criminal Records," and "Houston Chronicle: FBI Agent Confirmed in 2003 that Roland Carnaby Worked for Bureau - New Video of the Shooting Released"

... When Carnaby exited the SUV, one of officers opened fire. He later claimed he saw something shiny in the vehicle that he believed was a gun.

In a sworn deposition, that officer blamed the City of Houston for poor training in high-risk vehicle approaches. The on-scene supervisor also criticized HPD’s training process.

The disciplined supervisor has had previous actions taken against him by the department, including a suspension from duty for the violent striking of a prisoner, failure to abide by laws, insubordination and speeding.