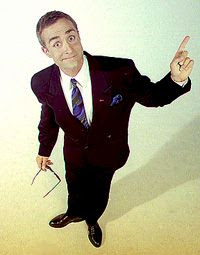 Oct. 21 (Bloomberg) -- KeyCorp, U.S. Bancorp, Regions Financial Corp., and National City Corp. may seek to join a $250 billion government plan to recapitalize banks and are pondering whether to use the money to make acquisitions, a step backed by U.S. Treasury Secretary Henry Paulson.

Regions, Alabama's biggest bank, said it will raise as much as $3.5 billion by selling a stake to the government. KeyCorp, the No. 3 Ohio lender, will seek between $1.1 billion and $3.3 billion, while bigger rival National City also mulls a stock sale. Some cash may finance takeovers, the bankers said today. ...

... The CEO of KeyCorp is Ken Carr III: "Dr. Ken Carr, CEO: Ken Carr has held senior executive roles and completed significant MERGERS and acquisitions with organisations such as

(Note: Computer Sciences Corporation (CSC) is only one of the most corrupt intelligence fronts in the world. The other corporations aren't coy virgins, either.)

(Note: Students of domestic fascist history know Sullivan & Cromwell as a significant cog in CIA-Nazi relations and the intelligence underground - example: "If you ever need a reminder that the CIA was founded and run by lawyers, you won't need to look any further than the overthrow of Guatemalan democracy. The Dulles brothers were partners in the Wall Street law firm of Sullivan & Cromwell; time permitting, they also worked for the US government. With John Foster Dulles heading the State Department and Allen Dulles heading the CIA, they were the czars of Eisenhower's foreign policy, and they made sure that the interests of Sullivan & Cromwell clients weren't ignored." From: The CIA's Greatest Hits.
http://www.thirdworldtraveler.com/CIA%20Hits/Guatemala_CIAHits.html

Former KeyCorp Senior VP and Chief Economist Jeff Thredgold is listed with the speaker's bureau of the American Enterprise Institute, a front for the CIA and military intelligence.
http://www.aeispeakers.com/speakerbio.php?SpeakerID=1006

The current KeyCorp. is intertwined with TELSTRA, the Australian telephone system, by merger: "Telstra CEO to answer questions over business PAST, The World Today, Friday, 10 June , 2005 - ... when Telstra's new CEO, Sol Trujillo, fronts up to the Australian media tomorrow, there's little doubt he'll face some tough questions about his colourful past. Mr Trujillo's extensive management experience includes a stint running a company linked to the CIA, as well as a very brief career with a Telco implicated in one of the biggest corporate swindles in history. But the new Telstra boss has also run a hi-tech company that built spyware and had links to the CIA, and when US West company was taken over by Qwest Communications in late 2000, he narrowly escaped being number two at a company involved in a major corporate fraud.

"Here's how US TV reported the merger at the time: US TV: US West's chief executive becomes co-chairman of the new combined company, and president of its internet, local and wireless businesses. That's better than the first offer of vice-chairman, but clearly number two to Joseph Nacchio. .... Apart from running a company with CIA connections, he stuck by the Salt Lake Winter Olympics when its organising committee was accused of bribing Olympic officials. ....He's taking over a company with a diminishing revenues from its fixed copper wire phone network, and growing competitive threats in broadband, and mobile telephony.
http://www.abc.net.au/worldtoday/content/2005/s1389309.htm

Dick Cheney was a director of US West once.

More of the same: "Former US West CEO to head CIA-funded start-up, CNET News.com, November 15, 2000: The PHONE SYSTEM and the CENTRAL INTELLIGENCE AGENCY are both known for their strong interest in managing information. So it should come as no surprise that longtime Bell veteran Sol Trujillo is joining a CIA-funded wireless networks company, La Jolla, Calif.-based Graviton, as its chief executive. The small start-up was among the first to receive funding from the CIA's new venture capital arm, In-Q-Tel, which has a name that the United States' top spy agency admits is designed to invoke the memory of James Bond's favorite tinkerer, Q. Trujillo, who left US West this summer after a contentious merger with Qwest Communications International that left the latter's Joe Nacchio in charge, spent almost his entire career in the Bell system, starting with Mountain Bell and retiring as the chief executive of US West. He will replace Graviton founder Michael Nova, who will stay on as chief technical officer. Trujillo, 48, was recruited by Graviton director Brook Byers of the venture capital firm Kleiner Perkins Caulfield & Byers, another Graviton partner. Other investors include QUALCOMM, SIEMENS and SUN MICROSYSTEMS."

"In-Q-Tel is a bit more coy regarding how it might use a wireless data network. The company doesn't discuss the specific nature of the projects it funds, but insists that the research not only works to solve the agency's most vexing problems but also leads to commercial advancements."
http://www.news.com/Former-US-West-CEO-to-head-CIA-funded-start-up/2100-1033_3-248674.html

HOW HIGH DOES SOL TRUJILLO GO IN THE DOMESTIC POLITICAL SCENE? "A little bit of Sol in US presidential race," The Age, February 22, 2008: " ... Telstra chief executive Sol Trujillo faced the music over perceived plans to depart the country early and take up a job as a political adviser in the US. Trujillo once worked as chief fund-raiser for US presidential hopeful John McCain. While in Australia, Trujillo has chipped a nominal $US2300 ($A2507) into Senator McCain's campaign fund ... "
http://business.theage.com.au/a-little-bit-of-sol-in-us-presidential-race/20080221-1tq6.html

What the blogheads said: "Trujillo - Do you know what is un - Australian?

"To try to mingle in the affairs of Australia:

1) By not being an Ausralian citizen
2) By being openly a member of the Bush's CIA in Australia.

"How dare you say to stop the Australian Broad Band?
http://business.theage.com.au/telstr...1206-1fgg.html

Who are you anyway? Bush's puppet in Australia?"

Lets deport this $##^&&* to Texas and let him jojn his Republicain
friends. Sol Trujillo $%^&* you and suck George Bush.