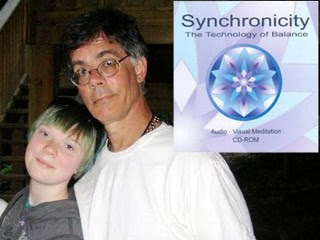 The "Foundation" is about sex and programmed beliefs, mind control, and the sporting of spirituality upon the "Master's" sleeve is what it usually amounts to - hoaxterism. Synchronity has more in common with the hyper-sexual Children of God sect than your friendly, neighborhood Ananda Ashram.

Gay sex is at the core of it. May as well be the Catholic Church:

"MC [SF guru Master Charles] does have sex with male disciples, in the form of 'spiritual initiations' ... "
http://www.factnet.org/vbforum/showthread.php?t=8762

"Synchronicity" was a word coined by Carl G. Jung - a proto-Nazi occultist generously funded and publicly promoted by Edith Rockefeller. After the war, Jung was a CIA asset who sat on the notorious Robertson Committee, and claimed that Nazi/British-designed "UFOs" - brought to the American continent by Laurance Rockefeller - were "hallucinations".

Mind controlled disciple: "If Master Charles says that he sees a Blessed Mother manifestation, I believe him. ... Master Charles would never conjure up a faux apparation, just to hustle for donations, because, philosophically, such an act would utterly violate his principles. ... "
http://www.readthehook.com/Stories/2007/07/26/LETTER-mastercharles-yay.rtf.aspx

Mind control: " ... Charles has also learned a few yogic tricks which he employs to make sure you do as he wants and if you don't, he uses certain aspects (including the low grade aspects of Chid.and Nity, etc.) he has developed to haunt, frighten or coerce you until you do. ... "

Mind control: "Master" Charles Cannon is a huckster who "described the latest appearance of the 'Blessed Mother Apparition'-- an incorporeal mater who speaks only with him-- to a crowd of about 60 at his organization's Nelson County compound one recent weekend. Regardless of whether Master Charles is creating a forum to spread authentic spiritual beliefs or just desperately seeking donations, there's one thing for sure: the new-agey guru is getting some attention. ... Synchronicity, Master Charles and the Blessed Mother were the subject of a recent piece on Guruphiliac, a blog dedicated to 'revealing self-aggrandizement and superstition" in the guru/yogi world. In late June, Jody Radzik, who operates the blog, described the alleged apparition sightings as a "bald-faced attempt at flimflamming the spiritually ignorant.' ... "
http://www.readthehook.com/Stories/2007/07/19/NEWS-synchronicity-D.rtf.aspx

The media promote the SF, as you'd expect of a mind control front (the media are in the business of mind control, too, and coordinate with intelligence cults effectively):

" ... 'Tens and dozens of people are showing up where they didn't before,' Scherr says. 'Now it's becoming a place of pilgrimage.' The Blessed Mother statue has been seen on CBS19 and even made the front page of the Daily Progress lifestyles section. ... "
http://www.readthehook.com/Stories/2007/07/19/NEWS-synchronicity-D.rtf.aspx

Ego-syntonic (flattering) beliefs go down easily (standard in CIA cult teachings, also derationalization and apoliticization) and create elitism: "It's just like we've been taught all our lives in the Bible: we are made in God's image."
http://www.readthehook.com/Stories/2007/07/19/NEWS-synchronicity-D.rtf.aspx

Same: " ... all beings have the capacity to love through their own Divinity ... "
http://www.wakeupfromyourslumber.com/node/9334

More mind control: " ... Recognition of Charles as the Source of Love etc. the reaction, (catharsis), subsides and so one goes on. ... "
http://www.wakeupfromyourslumber.com/node/9334

I'm trying to determine if the CIA is the covert sponsor of the "Foundation." This is my suspicion - food for thought, grounds for further research ...
Posted by Alex Constantine at 12:23 PM

Thank you for this. I believe SF is CIA as I wrote you and I know you will find out for us. It seems the death of part of a family is being parlayed for public sympathy, something the deaths of super-wealthy corporatist businessmen would not create. Pakistan will be blamed, Bush & Obama are backing India, those 2 countries have nukes. A nuclear event coming?