Yet Another Response to Benyamin Solomon at "Conservative Voice" - I am Drug-Free and Quite Sane, Thank You

Benyamin Solomon writes - "My politics on Israel: Super-Zionist. About Me: I'm an expert on the threats toward the free world including the Islamist threat. I'm perhaps one of your biggest hopes in troubled times."
http://israelinsider.ning.com/profile/BenyaminSolomon

"Benyamin Solomon" writes that Alex Constantine "slanders your opponents including me as fascists. You have yet to give a proper definition of the word and prove that I'm fascist."

Actually I did - but every word young "Benyamin" writes is an offensive lie, and as a budding right-wing propagandist in the O'Reilly mold, he doesn't want his audience to be aware that:

"Fascism is unbridled corporate control of government, military and propaganda functions - conceived in the west. ... It elevates thugs and criminals to positions of power. It is inherently conspiratorial and engages in acts of destruction to advance itself. It scapegoats 'Islamo-fascists' - when American corporations in league with their corallaries in Germany, Japan, Italy, etc., make fascism possible and feed the geo-genocidal beast. ... Make no mistake about it, the U.S. is the beating heart of it all."
http://aconstantineblacklist.blogspot.com/2008/10/re-alex-constantine-returns.html

Bear in mind that Solomon perceives the world from a very far-right perspective:

"The anti-war movement supports America's totalitarian enemies, whether they're Islamists or Communists from Latin America. ... I will show the "peace" movement's ties to America's enemies, from the Communists in Latin America to the radical Islamists. ... "
http://www.socyberty.com/Activism/The-Anti-War-Movements-Pro-Tyranny-Stand.304747

O'Reilly is the obvious influence here.

Solomon writes for right-wing rags, including "Conservative Voice," with no integrity, established for the purpose of military-corporate perception management. (He does more to damage himself by writing than I possibly could with a refutation, so leave him to it with a blessing.) 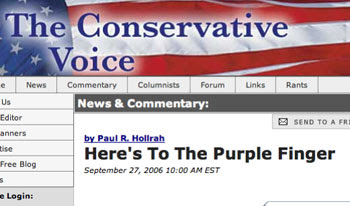 Benyamin: Anyone who seeks to discredit my research on fascism quotes the decade-old bunk you are citing.

You latched ahold of "information" about me posted by a demonstrably psychotic (see hammer episode below) shill named Martin Cannon. I exposed him over ten years ago, and he hasn't been back. But his defamatory posts are still on the Net.

Cannon's own source regarding myself, Sandy Munro, posted a statement at the KPFK message board five years ago stating that Mr. Cannon grossly misrepresented statements Munro had made. What else do you want? Does a public denial from Cannon's source satisfy you that the statements you have repeated are defamatory and false?

Your trusted "source" also claims that all MKULTRA victims are "liars."

But you wrote about me. First, I am a near vegan (I do wear leather sometimes, but my diet is completely vegetarian). I am very careful about everything I eat. No aspirins, no antibiotics, and certainly not drugs.

"According to a former associate of Alex Constantine," you write, "[Constantine] is a kook who took a lot of drugs." False. I do not touch drugs. You are the kook here, as well as Cannon, and you are in his league (wrong-headed, pathological).

A kook is as a kook does: I have a tape of Cannon beating up a woman. Would you like to hear it? I have a deposition from someone your valued source attacked with a hammer. I have a photo of a door he smashed in with that hammer in an attempt to beat up his roommate. Police reports, too.

Explanation: Some reasearchers are aware of Martin Cannon, and you will find old posts on him at NewsMakingNews - he is dismissed as a "psychopath" for harassing victims of mind control experimentation and trying to discredit them. Cannon tried to discredit me by posting a lot of BS about me on the Net. It backlashed on him - when you were ten years old - and he's discredited.

All this began after he was accused by victims of trying to discredit them, and I came to their defense. This riled him, so he posted a few stupid smears on the Net as payback. But you don't know that because you never sought the truth - you want to smear me for correcting your fascist commentaries.

Now, by citing Cannon, you have discredited yourself, too - as if your love letters to GW Bush haven't already accomplished that.

I am drug-free, healthy and very sane, thanks. My work speaks for itself. So does yours. You are a Bush-loving, libelous crackpot who is incapable of checking facts - not that a fulminating, right-wing wanker like you cares about that.

PS: My name is Alex. You've been deceived, but accuracy isn't your forté. Your name isn't "Benyamin," is it?
Posted by Alex Constantine at 10:22 AM

Why are you even responding to this kid? He's a prolific writer on right wing blogs, of which anyone can create. His writing style resembles one of either someone in high school or his early years in college and it's quite apparent that he has yet to take his first comp classes. He tries to come off as some sort of journalist but his writings are more than amateurish.

How many books has he published? How many articles was he paid to write? My guess would be zero.

Stop letting him bait you.