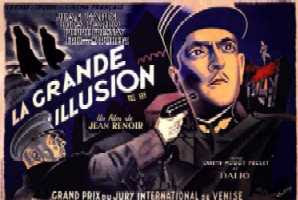 " ... it was banned by the Nazis as "Cinematographic Enemy Number One", who systematically attempted to destroy every print in existence, at least in Europe. ... "

One of the undisputed masterpieces of cinema history, La Grande illusion is a film of enduring popularity and one of the most powerful anti-war films of the Twentieth century. It stands beside Jean Renoir’s other triumph, La Regle du jeu, as one of the all-time great French films.

The film tackles the anti-war theme from a very subtle angle, which could explain its profound impact. The film shows that social divisions and prejudices create far stronger barriers between people than apparently more concrete barriers of nationality, race or language. The most touching instance of this is where a German soldier gives the imprisoned Maréchal his mouth organ – a small gesture but a powerful symbol of their common place in society. The strong association between von Rauffenstein and de Boeldieu is less attractive to watch but still reinforces the point.

You might even think that the two men were brothers, such is the strength of the social ties which bind them. The final part of the film, where Maréchal forms an amorous attachment with a lonely German farm woman, is no less effective at revealing how human beings can surmount the language barrier.

Renoir had himself served in the First World War and had emerged as a committed pacifist. The film does not, like many anti-war films, belittle the concept of war, but, rather, challenges its necessity. What does war change if the barriers which divide social classes remain immutably intact? Is it simply a game for the idle rich to justify their existence (a point which is directly alluded to in the film: for an ordinary man, to die in battle is a tragedy; for an aristocrat it is a solution).

Renoir was clearly deeply involved in this film which shows the director as his most precise and eloquent. Even the uniform which Jean Gabin wears in his role as Maréchal is Renoir’s own uniform.

With extensive location filming, the film has a cold realistic feel which a studio-bound production would lack. This emphasises the warmth of the human participants in the drama and the audience really does get to sympathise with their frustration and penury. This is also due in no small part to some exceptional acting performances, particularly Gabin, Fresnay and von Stroheim, all of whom are perfectly cast in the respective roles.

Eric von Stroheim is the most memorable, playing the part of an aristocratic soldier - a failed aristocrat and a failed soldier. There is a strange pathos and dignity in von Stroheim’s performance that makes his probably the most sympathetic character in the film – although Dita Parlo’s moving small part as Elsa at the end of the film would be a very close second.

La Grand illusion enjoyed enormous success with the public and critics when it was released in 1937. However, it was banned by the Nazis as "Cinematographic Enemy Number One", who systematically attempted to destroy every print in existence, at least in Europe. Remarkably, a complete print survived and was unearthed by American soldiers in 1945 – in Munich. Although the film was tarnished for a while after the war as echoing Vichist sentiment, it was soon reinstated as one of the landmark films in cnema history. If you have to see just one French film, this would probably be it.