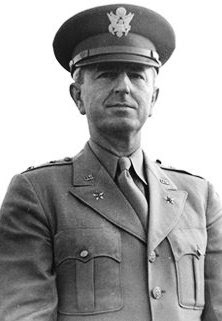 General Wedemeyer and the China Lobby, a fascist front on intimate terms with the John Birch Society (Birch served under Wedemeyer in China): "The 'China Lobby' evolved from American military and intelligence personnel who served in China during the war. Most important of these was General Albert C. Wedemeyer.... Educated (in part) at the German military academy in Nazi Germany, Wedemeyer rented his apartment from Gerhard Rossbach. Along with Ernst Rohm, Rossbach had commanded the SA and worked for the CIA after the war. Wedemeyer remains the chief suspect in the deliberate betrayal of the U.S. mobibilization for World War II to the Chicago Tribune, bitterly opposed to both FDR and the prospect of American entry into the war. Its publication fundamentally compromised U.S. military preparation for war. Wedemeyer became a lynchpin of the China Lobby and a darling of the far right in the 1940’s and 50’s. In the 1980’s, Reagan appointed the reactivated Wedemeyer to a special military position. ... The [Birch Society] functioned in a manner roughly analogous to the German Nazi Party in the 1920’s. ... Elements of the John Birch Society participated in the assassination of President Kennedy, functioning in conjunction with fascist and Nazi elements dating from World War II."
http://spitfirelist.com/anti-fascist-archives/rfa-10-13-the-aryan-nations/

James von Brunn, the neo-Nazi accused of killing security guard Stephen Johns in an attack on the U.S. Holocaust Memorial Museum on June 10, 2009, corresponded with and visited the home of General Albert C. Wedemeyer, a major figure in the U.S. military and in Republican politics during the 1940s, 50s and 60s.

Von Brunn's meeting with Wedemeyer took place in the spring of 1981 at Wedemeyer’s home, and their correspondence lasted for a year after that, until March, 1982. During this period, in December, 1981, von Brunn was arrested for entering the Federal Reserve Board headquarters in Washington, D.C. armed with guns and a phony bomb, stating that he intended to conduct a "citizen's arrest" of the Fed’s board members for treason. (He was arrested and tried for this and served a six year sentence in a federal prison.) After von Brunn's arrest, Wedemeyer broke off their friendship.

Largely forgotten now, Wedemeyer had at one time been a prominent figure in politics and in the military. Before the U.S. entered World War II, General Albert C. Wedemeyer was the author of the Victory Plan, which served as the basis for U.S. strategy in the war. During the war, Wedemeyer served in a number of key positions in East Asia, rising in 1944 to be commander of the China theater. He later played key roles in two Republican presidential campaigns (those of Robert Taft and Barry Goldwater), and would serve as a key fundraiser for and adviser to Ronald Reagan. He was on the original board of directors for both the John Birch Society and the magazine The National Review. Wedemeyer also played a major role in framing the debate over “who lost China” – an issue which was central to the McCarthy era anti-communist witch hunts of the 1950s.

Wedemeyer met with von Brunn at the general's farm in Boyds, Maryland in the spring of 1981 and corresponded with him sporadically for about 10 months thereafter. Their correspondence is collected in Gen. Wedemeyer’s papers at Stanford University’s Hoover Institution. While Wedemeyer's ties to far-right groups were public and well-known, historian Joseph W. Bendersky in his 2000 book The "Jewish Threat": Anti-Semitic Politics of the U.S. Army, found extensive evidence that, behind the scenes, Wedemeyer worked to promote anti-Semitic and anti-Zionist policies within the U.S. military establishment. Wedemeyer's correspondence with von Brunn shows just how extreme Wedemeyer's politics were.

In June and July of 1981, the two exchanged letters concerning von Brunn's belief that a Zionist conspiracy had taken over the United States in order to "destroy the White Race". Von Brunn wrote to Wedemeyer that he believed that Jews were conspiring to send African-American soldiers to Germany in order to "destroy the white gene pool". The only remedy for this, Von Brunn wrote, was "DESTROYING THE ZIONIST OCCUPIED GOVERNMENT" (caps in original). Shockingly, General Wedemeyer wrote in response that he was "in complete accord with (this) objective", but felt that it was not achievable.

In January, 1982, one month after his arrest at the Fed Board headquarters, von Brunn sent Wedemeyer a description of the attack in the form of a detailed military mission report which he apparently also sent to a number of other recipients.

In March, 1982, von Brunn sent General Wedemeyer a rambling five-page political manifesto in the form of a memo to his attorney planning a legal defense for the Fed Board attack. Von Brunn justified the attack as an attempted citizen's arrest for various "crimes" he accused the Federal Reserve of having committed. On the back of this memo, von Brunn wrote a handwritten apology to Wedemeyer for an angry outburst, indicating that the two had a conversation around the time of the Fed attack. (Based on this note, it seems possible that von Brunn attempted to contact Wedemeyer after his arrest, was rebuffed by Wedemeyer and grew angry in response.) Von Brunn's note also states his belief that the U.S. government was controlled by evil "illuminati" intent on instituting "One World Gov't", and expresses his belief instead in "One World with Western Man uber alles".

Von Brunn’s attempts to continue his correspondence with Wedemeyer were discouraged in a polite letter from Wedemeyer’s secretary in March 1982. This letter stated that Gen. Wedemeyer had "no interest in the matter described in (von Brunn’s) letter", and that he believed that political change should be pursued only by legal means.
Posted by Alex Constantine at 7:12 AM