MKULTRA Legacy: The Stain of Dishonor and the Prerequisites for Redemption 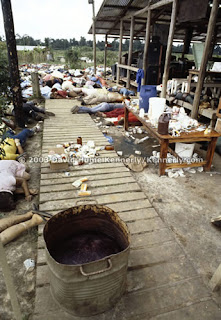 Editor's note: MK-ULTRA was an experimental program that went operational in the 1960s. Experimentation continued, of course, at Jonestown and elsewhere, but the legacy of MK-ULTRA is evident in all American social control systems, including mass media, prisons and "detention" camps, religious movements, the military, mental institutions ... even pre-schools. - AC

Despite the passage of four decades, America and its military have never come to grips with its own ghastly programs of using soldiers as guinea pigs to test chemical or biological weapons such as LSD, sarin, nerve gases, plague, mescaline, anthrax and hundreds of others. At the same time, they also conducted mind-control experiments, as soldiers and others were administered drugs, and septal implants were inserted in the sinus cavities a la "The Manchurian Candidate." The secret research programs, originally code-named MKULTRA but continued under a long succession of other code names, were conducted mainly by the US Army from 1943 until at least 1975. However, the CIA provided planning, financial support and field testing. Participants in the experiments were recruited by the Army and lured by promises of no KP duty, a four-day workweek, the promise of medals and special recognition. At the same time, they were sworn to secrecy and forced to sign a general consent form without informed consent or even knowing the nature of the toxic substances that were sprayed in their faces, applied to their skin or injected into their veins. And the government continues to try to hide the fact that Nazi members were recruited to help devise these experiments as part of Operation Paperclip, and that many of the biological experiments were modeled after those conducted by the notorious Col. Shiro Ishi in Manchuria and Japan.

When word of these programs leaked out in the mid-1970's, the CIA director, Adm. Stansfield Turner, promised Congress that the affected veterans would be notified and provided medical treatment. See Final Report of the Senate Select Committee (Church) on Intelligence Activities, 94th Cong. (1976), Book I: XVII ("Foreign and Military Intelligence: Testing and Use of Chemical and Biological Agents by the Intelligence Communities"), at http://www.aarclibrary.org/publib/church/reports/book1/html/ChurchB1_0197a.htm. See also Project MKULTRA, The CIA's Program of Research in Behavioral Modification: Joint Hearing Before the Senate Select Committees on Intelligence and Human Resources, 95th Cong. (1977), Testimony of CIA Director Admiral Stansfield Turner at http://www.druglibrary.org/schaffer/history/e1950/mkultra/Hearing03.htm.

However, that promise was more observed in the breach, as the process of notifying and treating the victims of human experimentation has barely scratched the surface of their acts of treachery. And now we learn that the DoD will not even compile an initial roster of affected veterans until 2012. Unlike Britain, which long ago compensated its veteran participants in a parallel group of tests at Porton Down, America is waiting patiently for these veterans to die, and it is one of the greatest injustices of our time.

Yet, despite the long passage of time, the agents responsible for this program continue to offer rationalizations to justify their own acts or those of their predecessors. They cite the fears engendered by the Cold War, real or imagined, and raise the chance that our enemies might beat us to the punch. You hear a lot of denial or outright lies, and the trail of documents suddenly disappeared in a purging ordered by the CIA director, Richard Helms. And they speak of sacrifices for the common good (not their own, but of those men exposed). The doctors among them don't like to talk about the Hippocratic Oath or basic principles of morality. Rather, they talk a lot about science, advances in learning and the thrills of discovery. They forget that "Blood does not wipe out dishonor, nor violence indicate possession" (Julia Ward Howe). And you hear nothing or very little about the long-term health effects of their programs, and their failure to notify, monitor or treat the victims, who have experienced a panoply of adverse health effects such as PTSD, breathing and lung problems, problems with internal organs and countless others.

Walter Lippman once said that a man has honor if he holds himself to an ideal of conduct though it is inconvenient, unprofitable or dangerous to do so. The perpetrators of these programs have stained their honor. In a time of admitted polarization and confrontation, they sacrificed their scruples, and victimized their fellow man. Their honor will never be restored unless they candidly admit their complicity and fault, and do everything in their power to help restore the health and well-being of their victims. With each death, their debt swells and the possibilities of redemption become more distant and unlikely. And a miasma of shame, as toxic as the clouds created by biological weapons, continues to hang over this great nation.

And when the last man standing succumbs, a pall of infamy and shame will become indelible, and choke the last glimmer of redemption, and history will justly record another chapter in the annals of infamy.
---------
Gordon P. Erspamer is the lead counsel in the class action complaint which is pending in San Francisco Federal District Court, Vietnam Veterans of America, et al. v. Central Intelligence Agency, et al., Case No. 09-0037 CW (ND Cal. 2009).

See the following links for the complaint in this action and its exhibits.