UK: BNP's Griffin under fire: 'Send him to the South Pole. It's colourless there'

His arrival at Television Centre was met with protests. And there was no refuge for the BNP leader inside 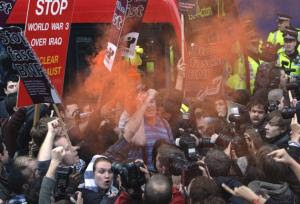 The leader of the British National Party was greeted by hundreds of protesters outside the BBC's London headquarters and ridicule within it last night as audience members and his fellow panellists turned on him during his controversial appearance on Question Time.

Though Nick Griffin claimed he was able to "land a few punches" during his appearance on the hour-long programme last night, other panellists left believing he had damaged his campaign to broaden his party's appeal by refusing an opportunity to say he was not a Holocaust denier, attacking "creepy" homosexuality, and claiming that the white supremacist group, the Ku Klux Klan (KKK), was a predominantly non-violent organisation. ...

'The Ku Klux Klan is an almost totally non-violent organisation'

Mr Griffin was met with a mixture of hisses and claps as he took his seat on the panel, with David Dimbleby, the programme's presenter, telling the audience before recording began that it would, "not just be the Nick Griffin show". However, the far-right party's leader was confronted from the very first question, when he was challenged over the BNP's use of the image of Winston Churchill to promote the party. ...

'The BBC is part of an unpleasant, ultra-leftist establishment'

Mr Griffin turned his fire on the gay community, arguing that he and others found the "sight of two grown men kissing in public really creepy". He added that "militant homosexuals" should not have the right to teach homosexuality to schoolchildren. "That is perverse," he said.

He also turned on the BBC at the end of the programme, saying he regarded it as "part of a thoroughly unpleasant, ultra-leftist establishment which, as we have seen here tonight, doesn't even want the English to be recognised as an existing people". Though he denied that he had thanked "Auntie" for the Question Time appearance, he said the BBC had "just done what it had to do". ...

Several attacks were made on Mr Griffin from the audience. One Asian member of the audience said that Mr Griffin should be sent to the South Pole, a "colourless landscape" he would enjoy. A young Jewish audience member also challenged him over his view of the Holocaust. "I cannot tell you why I said those things in the past, or why I have changed my mind," Mr Griffin said, arguing that European law prevented him from doing so. ...

http://www.independent.co.uk/news/uk/politics/griffin-under-fire-send-him-to-the-south-pole-its-colourless-there-1807755.html
Posted by Alex Constantine at 6:55 AM