Russia Casts Doubt on Hitler Skull Theory in Apparent Cover-Up ... Arranged by whom,?

Read to the end of this article from the Telegraph and the denials from Russian archivists crumble against a concrete wall of documents and film footage. Who wants to bury Hitler in his bunker? And if Hitler did escape, where did he go? Was he protected by America's clandestine services, as were Barbie, Mengele, Von Bolschwing, Skorzeny and numerous other European far-right pariahs from The Big One? Hitler's faked death would be the work of Gestapo leader Heinrich Muller, an expert at faking the deaths of Nazi officials who escaped through the ratlines. When authorities attempted to exhume Muller's corpse after the war, his coffin was opened and five skulls were found inside. ... probably Jewish ... - AC 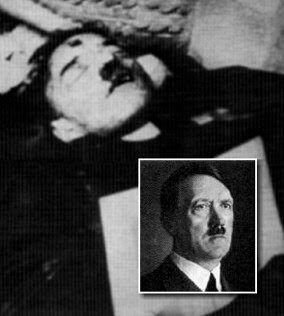 Russia has questioned the credibility of new research claiming Adolf Hitler may have escaped at the end of the Second World War.

Officials in Moscow say they have no record of a US researcher who claims to have examined a skull fragment said to belong to the late Nazi dictator.

Russia responded after a History Channel documentary claimed to have subjected the bone, which is kept in Moscow, to DNA testing and discovered it belonged to a woman and not Hitler.

The program suggested its findings bolstered the theory that Hitler did not commit suicide in 1945 as is widely thought.

But Vladimir Kozlov, deputy director of Russia's state archive where the fragment is stored, has cast doubt on the programme. He says he has no record that an American scientist called Nick Bellantoni who is shown in the program taking samples from the skull had ever been granted access.

"Nobody with that name – Bellantoni – has been into the archive for the last four years," he told state news agency RIA Novosti. "None of the directors or people who grant permission for this kind of thing know this name."

In the program, Dr Bellantoni is shown handling what looks like the skull fragment and removing five small pieces to take away for tests. But Mr Kozlov said no archivist would have allowed the American scientist to do this.

Even if the skull fragment does turn out to be that of a woman, Mr Kozlov said it would not undermine the accepted version of Hitler's death anyway. The definitive piece of evidence is a portion of Hitler's jawbone, also stored in Moscow, he added.

In the program, the narrator says Dr Bellantoni won access to the Russian archive after "heated negotiations". He is seen entering the archive, leafing through a Soviet-era file on Hitler's death, and examining a bloodied piece of Hitler's sofa along with the contested skull fragment. He tells viewers that he has only been given one hour in the archive. Soviet forces say they found the charred remains of Hitler's corpse in the ruins of Berlin in 1945. But theories that Hitler escaped and that the remains belonged to a doppelganger have failed to die.

Lynn Gardner, a spokeswoman for the History Channel, insisted the program makers did access the archives. She said a named witness could support this and that they had a receipt for the money they had paid to film inside the archive.

“We have documentation of this access,” she said. “We take every possible measure to ensure the accuracy of our product.”