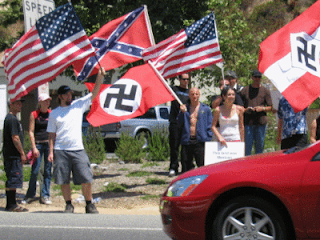 "In Weimar Germany, the Nazi fringe was tolerated, encouraged, and funded by mainstream conservatives ... "

I think similar forces are at work in our country, and they frighten me.

Dangerous political movements have threatened the peace and structure of democratic society throughout recent American history. Violent hatred has motivated groups on the left and right extremes, and sometimes these movements have gained considerable local power. I found Maine to be a most tolerant and peaceful place when I lived there for 27 years, but I learned to my surprise how pervasive the influence of the Ku Klux Klan had been in Maine during the 1920s, when it had 150,000 members. The White Citizens Councils were thoroughly integrated into the justice and police system in the South in the 1950s and 1960s. Both organizations were representations of social movements of like-minded, often violent people who perverted our political institutions for racist purposes. These movements threatened American citizens and American institutions, but their dominion was local and temporary. The dangers that such seemingly uncontrollable social forces pose to our lives and liberties should be one of the major lessons in the teaching of American history.

Perhaps I am especially sensitive to similar dangers in the present because of my professional and personal preoccupation with the Holocaust. In Weimar Germany, the Nazi fringe was tolerated, encouraged, and funded by mainstream conservatives, giving respectability to its brand of violent antisemitism and radical anti-government propaganda. When economic disaster struck in 1929, the Nazis’ calls to overthrow the democratic system suddenly jumped from 3% of voters in 1928 to 18% in 1930 to 37% in 1933.

I think similar forces are at work in our country, and they frighten me. They are obscured by the ludicrous claim that the Democrats are today’s Nazis. The very commonness of Obama with a Hitler mustache at conservative events is a new and noteworthy feature of today’s political life, duly reported by all major media. It functions as a visual prop for the much more serious insistence that Obama and the Democrats are planning a health care system which resembles the Nazis’ T-4 program, in which they murdered at least 270,000 handicapped people.

The woman who asked Barney Frank in all seriousness why he was supporting an American T-4 program gave him a You Tube opportunity to show how irrational her beliefs were. But she was serious. Egged on by media voices that are reminiscent of Father Coughlin in the 1930s, but much more ubiquitous, she can also reasonably observe that her political beliefs are encouraged by Republicans in Congress, in governors’ mansions, and in official Party posts. In a philosophy class I just attended, the professor said that large numbers of people generally do not support completely implausible arguments. Historically this only happens when people with power and influence make a concerted effort to propagate a big lie.

It is easy for intellectuals to laugh at the historical nonsense of charges that Obama is both a socialist and a fascist, a Nazi trying to bring Communist health care to the US. The official voice of the Republican Party, Michael Steele, may seem silly when he circulates the claim that Democrats want to deny health care to Republicans. But we should not laugh at the final step, thus far, of the movement unleashed by mainstream conservatives – bringing guns to Obama’s public events. Conservatives say they are merely demonstrating their support for their threatened Constitutional rights. Would Republicans have allowed a known leftist to carry a weapon openly at a Presidential function after 9/11? Under the Patriot Act, and the illegal surveillance which accompanied it, American citizens couldn’t be sure they could joke on the telephone about Bush being dead. Now the über-patriots are saying that our President is a racist who might try to kill your Grandma and simultaneously providing cover for crazies who might try to shoot him.

Our democracy is under attack. Men in high public office and with control over our national airwaves are deliberately stoking a potentially violent movement opposed to our democratic process. They challenge the legitimacy of the last election, they label our elected leaders with the worst political curse words they can think of, they encourage the purchase of weapons at local gun shops and talk of secession in the capitals.

You don’t have to be a Holocaust-obsessed Jewish academic to see what is going on. Or to remember that German mainstream conservatives were so opposed to the liberal reforms pushed by the democratic system Weimar system that they thought they could harness a violent radical and hateful movement to win political advantage. They were stupid. But we would be stupider the second time around.