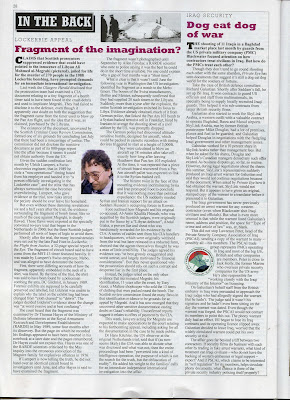 An MSP claims a piece of evidence vital to the conviction of the Lockerbie bomber was taken from Scotland to Germany during the investigation.

Nationalist MSP Christine Grahame claimed a fragment of the timer said to have detonated the 1988 Lockerbie bomb was taken to Munich for examination. She said the information was confirmed by the Crown Office in response to a Freedom of Information request.

A total of 270 people died when Pan Am flight 103 exploded over the town of Lockerbie in southern Scotland. The Crown Office have confirmed to me that the fragment, PT-35, the piece of evidence that it was claimed linked Libya to the attack, was also sent to Germany in April 1990, as well as the US

A timer fragment about the size of a thumb nail, known as PT-35, was taken to the Siemens company in Munich in April 1990 by Scottish police officers, according to Ms Grahame.

In a separate development, a senior FBI investigator, Dick Marquise, also claimed the fragment was taken to the United States.

PT-35 was crucial to the case as it was found in fragments of clothing bought in Malta. It was these, the prosecution claimed, that linked the man convicted of the atrocity, the Libyan Abdelbasset al-Megrahi, to the bombing. If there was any suspicion that the fragment had been tampered with, it could have undermined the entire prosecution case.

Megrahi was convicted of the bombing in 2001, after a trial at a specially-convened court in the Netherlands.

The Libyan served eight years in prison before being released in August on compassionate grounds, due to his terminal illness. His release came days after he had dropped the appeal against his conviction, which had been granted by the Scottish Criminal Cases Review Commission. Megrahi has always protested his innocence and has published documents on the internet which would have been used in his appeal.

Ms Grahame said: "The Crown Office have confirmed to me that the fragment, PT-35, the piece of evidence that it was claimed linked Libya to the attack, was also sent to Germany in April 1990, as well as the US.

"On 22 June, 1990, it was then taken to the FBI lab in Washington for examination by FBI officials there."

She said that on both occasions Lord Fraser of Carmyllie, the chief prosecutor at the time, did not know the evidence had been taken out of Scottish jurisdiction and control.

A Crown Office and Procurator Fiscal Service spokesman said: "Contrary to what is being claimed by Ms Grahame, the fact that the fragment of MST-13 timer known as PT-35 was taken to West Germany in 1990 by Scottish police officers was known to Mr Megrahi's defence team prior to his trial and indeed was presented to the court by the Crown as evidence in the trial.

"During the trial Hans Brosamle of Siemens was called as a Crown witness and described examining PT-35 in Munich to the court." He added: "At no time during the investigation was the timer fragment ever outside the custody and control of the Scottish police officers, or forensic scientists at the Royal Armament Research and Development Establishment."