" ... Peter, when a journalist such as yourself works for a religious cult leader such as Sun Myung Moon, Mr. Moon expects, nay, requires, you to follow the "cult" line. In a review of your work, I have discovered that you have, indeed, followed the Moonie cult line. In exchange for a paycheck, you have written what is expected of you, selling your illegitimate propaganda as objective journalism. ... "

"Peter Roff was United Press International's senior political analyst from September 2000 until June 2005. He joined the now-defunct Free Enterprise Fund (FEF) during summer 2005 and remained there until December. Roff is also the former Political Director of GOPAC, the political committee once headed by House Speaker Newt Gingrich. In that venue, Mr. Roff was a frequent commentator on politics and culture for MSNBC and the Fox News Channel. ... "
http://www.sourcewatch.org/index.php?title=Peter_Roff

Media manipulator: "Peter Roff, a Fellow at the Institute for Liberty and former head of GOPAC, really stretches to blame Self-Help Credit Union for starting the subprime mortgage disaster ... "
http://www.responsiblelending.org/media-center/center-for-straight-answers/roff-s-wrong.html

"'Truthers' are the people who believe the 9/11 terror attacks were an inside job. That the Bush administration had advance knowledge of them and let them occur. In the more extreme version of an already extremist theory, truthers believe the U.S. government itself carried out the attacks as an excuse to take the nation to war. ... the truthers are at least as much of a fringe element as the birthers. They are, perhaps, just as influential—in an intellectual and political sense—as the birthers and the Democrats need to deal with them."
http://www.usnews.com/blogs/peter-roff/2009/09/09/charlie-sheen-joins-the-truther-911-conspiracy-theory-fringe.html

Letter to Peter Roff re His Association with Moonies - a Truly "Fringe" Movement:

Now before you get your hackles up about this very public letter, let me assure you that I have nothing but the best intentions in mind, i.e., to 'enlighten'. Further, I will remind you that I am not anonymous, I am an accredited investigative journalist with 30+ years of experience. Therefore, if, in response to this letter, you undertake to discredit me as you have others in your piece entitled The Blame Game, be assured you that you will have serious legal problems. Therefore, be warned. If you take cheap, dishonest, shots at me, I'll shoot back!

Peter, let me ask you a question just between us 'peers'. Why are you working for the religious cult leader, Reverend Sun Myung Moon, who owns UPI and The Washington Times? I know of no respectable journalists who will work for him or any of his companies and organizations. So why do you work for him Peter?

Take a look at the following quotes from various speeches by your boss, Mr. Moon, and tell me why you work for someone like him:

From a June 16, 1997, 15th Anniversary Founder's Address of The Washington Times, speech by your boss, Sun Myung Moon:

"Today, as we celebrate The Washington Times' 15th anniversary, I cannot help but feel deep emotion. Fifteen years ago, when the world was adrift on the stormy waves of the Cold War, I established The Washington Times to fulfill God's desperate desire to save this world. Since that time, I have devoted myself to raising up The Washington Times, hoping that this blessed land of America would fulfill its world-wide mission to build a Heavenly nation. Meanwhile, I waged a lonely struggle, facing enormous obstacles and scorn as I dedicated my whole heart and energy to enable The Washington Times to grow as a righteous and responsible journalistic institution.

Today The Washington Times Corporation can be proud of its development into a world class global media enterprise. Since the end of the Cold War, the world began to realize that the direction taken by The Washington Times was correct. History will not forget our contribution. The efforts of The Times to revitalize the moral and spiritual values of the United States and the world are being recognized as absolutely urgent and necessary at this time."

From the same speech: "Absolute Sex is centered on God, and free sex is centered on Satan. Historically, world literature and the media have often stimulated free sex. But from now on, you literary figures and journalists should lead the way to prevent free sex. Free sex should completely disappear."

Now that you have heard Reverend Moon's speech, you can change your current position 180 degrees and become a new person, new nation, and new world.

"Definitely you are being changed. It is an absolute necessity to change this evil world. This world must be transformed.

"Without recognizing certain realities of the spiritual world, problems will continue to grow. ... "

In a piece published in The American Conservative Union, February 15, 2001, you wrote: "For conservatives, CPAC is more than a gathering; it is an institution of importance. From the first meeting in 1973, when liberals dominated both the Democrat and Republican parties, to today, the conservative political and intellectual movement has moved ahead, beyond the wildest dreams of its founders.

"Today, as most anyone at this event will tell you, they count among their number the president of the United States, most of his Cabinet, the majority of Republicans in both the U.S. House and Senate, and most of the nation's governors, along with a large assortment of state legislators and other local elected officials. As anyone here will tell you, it's a pretty good time to be a conservative."

"Last year, I presented my proposals [to the UN] to solve the fundamental problems plaguing the planet Earth, given that the world's circumstances have changed and the complex situations in which nations find themselves today are unlike those at the time of the United Nations' founding.

"One of these proposals was to establish a special body that would discuss and evaluate the religious, spiritual and moral dimensions of world problems. The United Nations must serve the world and God's ideal of creation effectively. To do so, it must transcend the power of politics and national diplomacy, which reflect the motives of nations seeking their own self-interest. Only then can it truly protect the human rights of all peoples and nations and build world peace.

"This is not limited to the United Nations. Maintaining order in the world and protecting public prosperity and peace will be difficult as long as political sovereignty operates on the principle of national self-interest and ignores or undermines moral and spiritual values."

"When I was sixteen years old I met Jesus early Easter morning, and set out on the path of Heaven's Will to accomplish the Will of God. I suffered all manner of misunderstanding and persecution, but I never gave up. So I have devoted my life of more than eighty years to the effort of bringing about a world of peace based on the ideal of true families. In 1971, I came to America in obedience to God's command, and for the past thirty years have invested my full spirit and energy to guide America so that it can fulfill the mission for which it was chosen, that is, the mission of the second Israel. "

From the same speech: 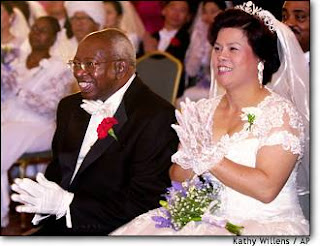 "A man's reproductive organ is shaped like the head of a poisonous snake. It is always looking for a hole to slither into. A woman's reproductive organ is concave, like the wide-open mouth of a poisonous snake with fangs. Once this snake bites, poison quickly spreads through the body, bringing eternal death. Adultery does not just destroy the individual, but also the family, clan and nation. In the Garden of Eden, Satan defiled the chastity of youth. He is harvesting the fruit of that crime in the wave of immorality that is engulfing the world's youth in this time of the last days, when history reaches its conclusion."

Peter, when a journalist such as yourself works for a religious cult leader such as Sun Myung Moon, Mr. Moon expects, nay, requires, you to follow the "cult" line. In a review of your work, I have discovered that you have, indeed, followed the Moonie cult line. In exchange for a paycheck, you have written what is expected of you, selling your illegitimate propaganda as objective journalism. Further, in an effort to gain credibility, and further Mr. Moon's psychotic visions of world domination, you have aligned yourself with legitimate right wing organizations.

Peter, you are no journalist. You are a propagandist and nothing more. And, in truth, you are worse. You use your skill to harm and harass other journalists who do not follow the "cult" line. And you malign Democrats to rack up brownie points with your boss, Mr. Moon. So what does that make you Peter? In my opinion, your actions on behalf of Mr. Moon renders you unprincipled.

The following is an example of Roff's propaganda disguised as journalism:

"With a war abroad and an economic downturn at home, members of Congress on both sides of the aisle have struggled to present a show of unity to the general public. What they say in private, amongst themselves when they think no one is looking, is another matter. One only need surf over to a variety of web sites including Buzzflash, Bartcop, Democrats.com and others of the left-of-center variety to see the often-profanity laced vitriol, the derision with which the president and his administration are viewed. These web sites belong to individuals and groups that are generally anonymous, certainly not elected officials in the public eye. Perhaps they should be given some latitude for their abrasive style of communication, as they are not accustomed to the niceties of life and language inside the Washington Beltway." - Peter Roff, right wing propagandist, Bush apologist, and Moonie appeaser. They are masters of propaganda and know how to create effective fronts- illusions. Basically, like many mind control cults, the "ends justify the means". In other words, whatever will help Moon and the organization to achieve its goals is moral. Deception is done systematically either by omitting critical information, distorting information, or outright lying.

When President Bush added North Korea to his list of "Axis of Evil" nations, the influence of the self-declared reincarnation of Jesus Christ, the "Reverend" Sun Myung Moon of the Unification Church, loomed largely over the White House decision-making process.

Why is TV news ignoring the relationship between Moon and the Bush family?

Stealth tactics, Moonies and the art of cynicism

Is George Bush a Moonie?

My Life in the Unification Church

A true story of brainwashing and beatings by Moonie "captains".

Unlawful solicitation of money is the cornerstone of the Moonie cult.
-----------
ALSO SEE: Alex Constantine Series Biblio.: "CIA/Media War Against 9/11 and CIA Assassination 'Conspiracy Theorists'"
Posted by Alex Constantine at 9:54 AM

Just for purposes of clarification, and despite what the post says, I am not a member of the Unification Church and have never been a member.