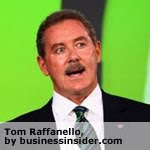 The day after his indictment in the Stanford financial scandal, Tom Raffanello surrendered to federal agents and found himself in court -- bound in handcuffs -- next to defendants charged with crimes he spent a lifetime fighting.

The appearance of the former chief of the U.S. Drug Enforcement Administration's Miami office on Friday represented a new development in a case that has so far centered largely on offshore banks and scammed investors.

After months of probing billionaire Allen Stanford and his top lieutenants, prosecutors say they now want to find out why thousands of records were shredded during a crucial period in the government's investigation.

Raffanello -- who joined Stanford's security force after retiring in 2004 -- is accused of ordering the records destroyed six days after federal agents shut down Stanford's worldwide operations in February.

Appearing in federal court in Fort Lauderdale with defendants from other cases -- including seven suspected drug traffickers -- the former DEA chief posted a $100,000 bond and agreed to turn over his passport. ...