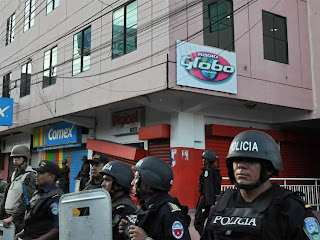 Oct. 8 (Bloomberg) -- Ousted Honduran president Manuel Zelaya said he was appalled by comments made by his supporter David Romero, a journalist at the country’s shuttered Radio Globo, that Hitler should have been allowed to finish his “historic mission” of exterminating the Jews.

“I condemn that kind of racism and discrimination,” Zelaya said in a phone interview late yesterday from the Brazilian Embassy in Tegucigalpa. “I don’t share that point of view.”

Romero, who says his grandfather was a Jewish immigrant from Czechoslovakia, unleashed an on-air tirade against Jews after Zelaya told reporters “Israelis” were behind “toxic gas” attacks on the Brazilian Embassy, where he has holed up since sneaking back to Honduras from exile on Sept. 21.

In a commentary on Radio Globo on Sept. 25, Romero said “it would have been just for Hitler to have finished his historic mission. It’s true what the Jews have done.”

Romero’s comments drew condemnation from the U.S. embassy in Tegucigalpa and the Anti-Defamation League. An Oct. 4 Wall Street Journal column labeled Zelaya an “anti-Semitic rabble rouser” based on Romero’s comments.

Zelaya’s foreign minister Patricia Rodas said military officials loyal to Zelaya informed her that an Israeli citizen who owns a weapons-supply company in Tegucigalpa had provided the acting government with chemicals that may have been used to make toxic gases, according to a Sept. 25 report on Venezuela’s Telesur.

“It was an error. Pardon me. I ask the Jewish community for forgiveness,” Romero said in a phone interview. “My grandfather’s a Jew. I feel like a Jew myself, though I’m not a practicing one. My blood descends directly from the Jews.”

Zelaya, who said in a statement that his government included four Jewish advisers, called his relationship with Romero strictly professional and denied allegations he’s an anti- Semite. Romero said there is a “malicious campaign” to use his comments to discredit Zelaya’s push to return to power.

“There’s a campaign to manipulate what I said and link it to Zelaya and the resistance,” he said. “I’m not part of the resistance, I’m a social communicator. I have a professional work relationship with Zelaya, that’s it.”

Romero supports the restoration of Zelaya and had frequent interviews with the ousted leader that helped rally supporters against the acting government of President Roberto Micheletti.

Along with TV Channel 36, Radio Globo was closed by the acting government last week for inciting violence. Soldiers seized their broadcast equipment and suspended their licenses. Romero said Globo has new broadcasting equipment and plans to return to the air even without a license if they’re not satisfied with the result of talks this week aimed at ending the crisis.

The Honduran economy may shrink more than 4 percent this year as the result of the overthrow of the government, risking worsening poverty in Central America’s second-poorest country, ousted Finance Minister Rebeca Patricia Santos Rivera said.

The ousted government of Zelaya had projected growth of 1 percent to 2 percent, before the coup in June that has brought curfews and cuts in foreign-aid, she said.

“Now people are talking about a contraction of 3 to 4 percent for 2009; it could even contract more,” she said in an interview in Madrid today.

To contact the reporter on this story: Blake Schmidt in Tegucigalpa at bschmidt16@bloomberg.net