A suppressed report which details how an oil company dumped toxic waste in Africa that may cause serious burns has been released following a parliamentary row over freedom of speech. 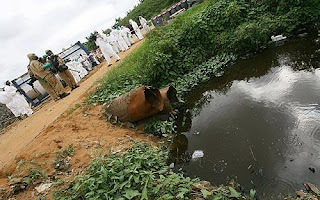 Toxic waste was dumped at as many as 18 landfill sites across Abidjan at night Photo: AFP/GETTY

The study commissioned just weeks after the incident in West Africa concluded that the dumping would have been illegal under European pollution laws and suggests that the “likely cause” of the illness reported by locals was the “significant release” of potentially lethal gas.

The report had been kept secret after Trafigura, one of the world’s largest independent oil trading firms, obtained a "super injunction" that threatened the centuries-old privilege of newspapers to report what MPs can say freely in the Commons.

On Friday night, as the High Court gagging order was lifted, senior figures at Trafigura admitted their approach may have been “heavy-handed” and insisted it had not been their intention to try to gag Parliament.

The firm also maintained that the damning report was only an unfinished draft study, while its author insisted that it was written “without reference to the underlying specific evidence”.

Trafigura denies anyone died as a result of the waste dumping and says they only suffered “inconveniences” such as “flu-like symptoms”.

Pierre Lorinet, Trafigura’s chief financial officer, told The Daily Telegraph: “Effectively that report was a draft report, a work in progress, very much when the event was happening and that report was effectively an analysis of possibles, as opposed to basing itself on material analysis, experts working into what did happen on the Ivory Coast.

“It is a heavy-handed approach, absolutely. With hindsight, could it have been done differently? Possibly.

“The injunction was never intended to gag Parliament or attack free speech.

“Our experience until then, some of the reporting, people weren’t necessarily interested in our side of the story and to be fair it is probably a mistake that we have made over time, we have not been open enough.”

In 2006 Trafigura, a privately-owned, Dutch-registered company that has offices in London, had chartered a tanker, the Probo Koala, to carry a cargo of cheap, dirty petrol known as coker gasoline that it hoped to clean up for a profit.

After using caustic soda and a catalyst to remove sulphur from the fuel, it was left with waste products known as slops that were to be disposed of in Amsterdam. But Trafigura was told that the cost of handling the foul-smelling residue would be far higher than initially thought.

The waste was pumped back onto the ship and in August taken to Abidjan, the biggest city in Ivory Coast, where a local contractor called Compagnie Tommy unloaded it and dumped it at as many as 18 landfill sites across the city at night.

Within days there were reports that locals had suffered injuries from exposure to the dumped waste, with a UN official claiming recently that 108,000 had fallen ill.

Alleged victims came together to launch Britain’s largest ever class action against the oil firm, which was due to be heard at the High Court.

Last month Trafigura agreed an out-of-court settlement that will offer about £950 compensation to each of 31,000 people without accepting liability.

A joint statement issued by both sides following the out of court settlement last month said that more than twenty independent experts from a number of fields have investigated the incident.

“These independent experts are unable to identify a link between exposure to the chemicals released from the slops and dealths, miscarriages, still births, birth defects, loss of visual acuity or other serious and chronic injuries. Leigh Day and Co, [who represented the victims] in the light of the expert evidence now acknowledge that the slops could at worst have caused a range of short term low level flu-like symptoms and anxiety," the statment continued.

Trafigura has already paid more than £100m to the Ivory Coast authorities for a clean-up operation and still faces court action in Amsterdam for the alleged illegal export of toxic waste.

Soon after the incident Trafigura’s lawyers commissioned Minton, Treharne & Davies, a firm of Wales-based scientific analysts, to look into the “potential composition” of the slops discharged from the ship.

The report was not made public by Trafigura, which maintains that the slops could not have caused the illness reported.

But a leaked copy of the Minton report found its way into the hands of journalists from The Guardian newspaper.

In September this year, Trafigura took what it now calls the “unenviable step” of asking its lawyers, Carter-Ruck, to seek an injunction preventing publication of the report.

It says it did so solely to prevent biased reporting, but the terms of the injunction appeared to prevent reporting of the fact that Paul Farrelly, a Labour MP, had tabled a question relating to Trafigura.

This week users of Twitter, the popular “micro-blogging” website, alerted the world to the Commons order paper listing the question and a website for leaked documents where the Minton report could be read.

On Friday night the High Court injunction banning reporting of the Minton paper was lifted.

The long-suppressed report explains the harmful nature of the chemicals “likely to have been present” following the dumping of the slops and states: “For these people [living or working near the dump sites], the possible consequences are burns to the skin, eyes and lungs, vomiting, diarrhoea, loss of consciousness and death.”

It warns that the sulphur chemicals can break down in the environment and release hydrogen sulphide, a “highly toxic” gas that can kill. It says the effects of the release of this gas were reported and “we conclude hydrogen sulphide release to have been the likely cause”.

The report also states that the disposal of the liquid, corrosive and flammable waste would be “forbidden” under EU rules.

But Trafigura disputes the content of the report, which it says was left unfinished after a more detailed investigation of the actual slops by the Netherlands Forensic Institute.

The oil firm says hydrogen sulphide was not present in the dumped waste.

A statement produced last night by John Minton, the report’s author, said: “Any suggestion that the draft September 2006 report was anything other than an initial desktop study, which remained in draft and which was quickly superseded when we were first provided with reliable facts, would be wholly incorrect.”