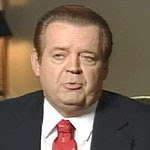 SBC lobbyist Richard Land has haughtily defended his right to dredge up the Nazis whenever he sees fit.

Earlier this month I criticized some offensive comments about health-care reform made by Richard Land, the top lobbyist for the Southern Baptist Convention (SBC).

Land, speaking to the Christian Coalition of Florida during a Sept. 26 banquet, blasted President Barack Obama and congressional Democrats, remarking, “I want to put it to you bluntly. What they are attempting to do in health care, particularly in treating the elderly, is not something like what the Nazis did. It is precisely what the Nazis did. Let’s remember, the first 10,000 victims of the Holocaust were not Jews, they were mentally handicapped German children who were gassed and burned in ovens because they were considered to have…lives unworthy of life.”

Land went on to compare Dr. Ezekiel Emanuel, the president’s chief health-care advisor, to Josef Mengele, a Nazi doctor and SS officer notorious for his vile experiments on human subjects during the Holocaust.

Abraham Foxman of the Anti-Defamation League wrote to Land and criticized him for his appalling comments. Land stepped away from them – sort of.

But Land’s contrition was short lived. One week later, he was at it again. Baptist Press, the SBC’s news service, reported that Land “has no plans to stop pointing out where the reasoning behind health care reform proposals intersect the ideologies held by those in history who failed to appreciate the preciousness of all human life.”

The Baptist Press went on to say that Land “still believes there are connections to be made between some underlying philosophies held by the Germans and others in the first half of the 20th century, and certain elements under discussion in the health care reform debate today.”

Land also lashed out at Richard V. Pierard, a former Indiana State University history professor, who had criticized his comments in a column on Ethics Daily. Land accused Pierard of attempting to censor his speech and set himself up as a “speech czar.”

In fact, Pierard, an expert on modern German history, merely pointed out why Land’s comments were so off base and offensive.

Nowhere in his column did Pierard say Land should not be permitted to speak – only that his comments were misguided and uniformed, which they were. Land responded by haughtily defending his right to dredge up the Nazis whenever he sees fit.

What’s to be done about all of this?

I’d like to see the SBC hand Land his walking papers. The man is an embarrassment and is not fit to speak for the nation’s largest Protestant denomination.

The fact that Land’s dismissal is unlikely to happen is just further proof of how truly extreme the SBC has become since it was taken over by far-right fundamentalists in the 1980s.

So I’ll settle for a moratorium on Nazi comparisons. A group of religious leaders has proposed just that. In an open letter noting Land’s remarks and similar comments by other public figures, the band of Christian, Jewish and Muslim leaders wrote, “The Holocaust was a tragic event in which the Nazis systematically murdered 6 million Jews. The Nazi regime that perpetrated this mass genocide was one of the most horrific in world history. There is no place in civil debate for the use of these types of metaphors. Perpetrators of such language harm rather than help both the integrity of the democratic process and the credibility of religious commentary.”

I understand that Americans have different opinions about health-care reform. A mature nation should be able to discuss that (or any other issue) with civility. That quickly becomes impossible when Nazis are dragged into the picture.

Land has the right to say any fool thing he wants. But he ought to realize that his Nazi comparisons are adding nothing of value to the debate over health care and only dump more poison into the nation’s already toxic public square.