Did The CIA Have More Motive than Oswald? 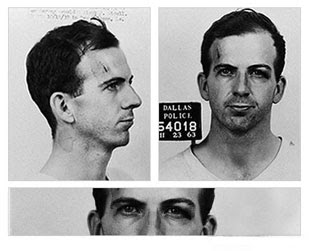 For the life of me, I still don’t understand what Lee Harvey Oswald’s motive was for killing President John F. Kennedy. The lone-assassin theorists say that he was a lonely and disgruntled communist sympathizer who sought glory and fame for killing someone as powerful as the president of the United States.

But if that’s the case, why would Oswald deny that he killed the president? Why would he claim that he was “a patsy,” i.e., someone who had been set up to take the fall? Why wouldn’t he proudly admit that he had killed the president of the United States? If he were seeking glory and fame, how would that be achieved through a successful denial of having committed the act?

Moreover, if Oswald intended to deny commission of the offense, I’ve never understood why he would leave such an easy trail behind him, such as the purchase receipt for the Carcano rifle found in the Texas School Book Depository. If he was going to deny killing the president, wouldn’t he have been better off simply going to a gun shop and purchasing a rifle with cash? There were no background checks back then.

I’m no expert on the Kennedy assassination but it seems to me that many of the things that people point to in support of Oswald’s guilt are also consistent with his having served in a deep undercover role for the CIA or other U.S. intelligence, as many people have alleged.

In fact, early on there were assertions that Oswald was a federal undercover agent. According to a biographical sketch of Waggoner Carr, the Texas Attorney General who led the investigation in Texas into the assassination and worked with the Warren Commission, “Carr testified that Lee Harvey Oswald was working as an undercover agent for the Federal Bureau of Investigation and was receiving $200 a month from September 1962 until his death in November, 1963. However, the Warren Commission preferred to believe J. Edgar Hoover, who denied Carr’s affirmations.”

Yet, the problem is that Hoover could be expected to lie about such an association and thus, his denial is meaningless.

Much has been made about Oswald’s communist sympathies, including his defection to the Soviet Union and his affiliation with a group called the Fair Play for Cuba Committee.

Yet, those actions are entirely consistent with being a CIA undercover agent. For one thing, Oswald was a Marine. Most people who join the Marines are patriotic individuals who have the utmost loyalty to their government. How likely is it that a person who hates America is going to join the U.S. Marine Corps? Not very likely at all. In fact, wouldn’t the Marines be a likely place that the CIA would do recruiting?

The thing that I have long found mystifying is the U.S. government’s reaction to Oswald when he returned from the Soviet Union. Did they arrest and indict the guy? Did they even subpoena him to appear before a federal grand jury? Did they harass him?

No, none of the above.

Don’t forget that Oswald was a former Marine who had security clearance and had worked at a military base in Japan where the super-secret U-2 spy plane was based. He was also a man who purportedly defected to the Soviet Union, supposedly tried to give up his U.S. citizenship, and presumably was willing to divulge all the secret information that he had acquired as a Marine to the Soviet communists, who were a much bigger threat to the United States during the Cold War than the terrorists are today.

Yet, U.S. officials didn’t lay a hand on him when he returned to the United States. Compare that treatment to how they treated, for example, John Walker Lindh, the American Taliban. How come they didn’t subject Oswald, whose case was much more egregious than Lindh’s, to the same treatment?

Moreover, I’ve never understood how Oswald was able to learn the Russian language so well. It’s not easy to teach one’s self a foreign language, especially one as difficult as Russian. It’s even more difficult when one has a full-time job, which Oswald had in the Marines. He certainly couldn’t have afforded a private tutor. Since he obviously learned Russian while he was in the military, how was that accomplished? Did the government provide the language training and, if so, why?

What would have been the CIA’s motive in developing Oswald as a deep undercover operative posing as a communist sympathizer? Well, don’t forget it was during the Kennedy administration that the CIA was in partnership with the Mafia to kill Fidel Castro. Since the CIA was developing such weird assassination schemes as poison pens and infected scuba suits to kill Castro, it doesn’t seem beyond the pale that they would also consider sneaking a trained assassin with communist credentials into the country to get rid of the communist leader.

Of course, the fact that Oswald might have been operating deep undercover doesn’t negate the possibility that he did in fact assassinate Kennedy or participate in a conspiracy to kill the president. If such were the case, the motive for denying commission of the offense would be stronger, along with the CIA’s denial of Oswald’s employment with the agency.

Of course, there are those who claim that it is inconceivable that the CIA, being the patriotic agency it is, would ever have participated in such a dastardly scheme.

Last Sunday, October 11, the New York Times published a book review detailing the history of Ramparts magazine, a leftist publication that was revealing in the 1960s some of the bad things that the CIA was engaged in. What I found fascinating was the CIA’s response:

“Outraged, the C.I.A. retaliated with a secret investigation of Ramparts’ staff and investors in hopes of uncovering foreign influence, but it found nothing…. The agency fought back with even more snooping — clearly illegal — as it ‘investigated’ 127 writers and researchers and 200 other Americans connected to the magazine.”

Now, consider the threat issued by President John F. Kennedy to “tear the CIA into a million pieces.” That threat was issued after Kennedy had fired CIA Director Allen Dulles, which occurred after Kennedy had supposedly betrayed the CIA by refusing to provide air support for the CIA-directed Bay of Pigs invasion of Cuba, whose aim was to kill Castro or oust him from power.

Let’s not forget, also, that the CIA was not above using ruthless means against foreign presidents, including assassination. Guatemala (coup), Iran (coup), Cuba (invasion and assassination attempts), and Vietnam (coup and assassination) come to mind, to mention a few.

“But they would never have done bad things to an American?” Oh? What about Project MK-ULTRA, the nasty and infamous mind-control project in which CIA officials conspired to employ LSD experiments against unsuspecting Americans?

“But they never would have employed their assassination talents or their partnership with Mafia assassins against an American president.”

But let’s not forget that the CIA sees itself as the ultimate, permanent guardian of U.S. national security. What if it concluded that a young, inexperienced president himself was jeopardizing the national security of our country by establishing secret contacts with communist leaders, such as Nikita Khrushchev and Fidel Castro, by plans to surrender Vietnam to the communists by withdrawing U.S. troops, just as he had surrendered Cuba to the communists, by philandering with a Mafia girlfriend, a Hollywood starlet, and even a wife of a CIA agent, and by threatening to destroy the CIA, America’s loyal and permanent guardian of security and liberty?

Would the CIA simply stand by and refuse to protect America from such a threat, even while it was doing everything it could to protect U.S. national security abroad with assassinations and coups? For an excellent discussion of that question, see JFK and the Unspeakable: Why He Died and Why It Matters by James W. Douglass.

Most likely though, we’ll never know have a definitive answer to that question because if the CIA did participate in a conspiracy to kill Kennedy, there is virtually no possibility that such a crime would have ever been uncovered without a hard-driving, honest, independent federal prosecutor with grand-jury subpoena powers charged with the specific task of targeting CIA officials for investigation and possible prosecution for murder. And we all know that the CIA and its supporters would never have permitted that to happen.

In my investigation of the JKF assassination it’s quite apparent that LHO was an agent. when you look at all of the things Oswald was doing that don’t make sense, they do if you point those actions towards intelligence operations. Also, a number of CIA agents have come forward to admit that Oswald was one of their own. Such as Hunter Leake saying that he used Oswald as a currier and that he was in New Orleans at the behest of the CIA. Former CIA accountant James B. Wilcott in his testimony to the HSCA (classified for 20 years) said he disbursed the money to the Oswald’s field officer. And there are many more references. Check out Oswald and the CIA and Harvey and Lee.