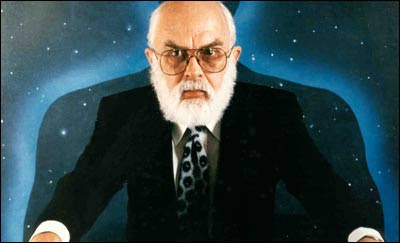 ... In a feature article today, the [BBC] is promoting a group of "scientists and skeptics" whose declared mission is to vigorously debunk those who are questioning the "accepted versions" of [9/11].

"While many people find them harmless fun, others believe there is a darker truth - that conspiracy theories are rewriting history, warping the present and altering the future. Enough is enough they say - it's time to fight back." the report reads.

The article centres around the "non profit" James Randi Educational Foundation (JREF), which charges £175 a ticket to its conferences, events that equate to little more than rabid debunking fests on everything from 9/11 truth to research claiming mercury containing vaccinations are harmful. ...

CSICOP is the original skeptic organisation from which all other skeptic groups have flowed over the last thirty years. It was founded originally as a Marxist /atheist organisation that poured its academic energy into disputing everything spiritual, religious and other-worldy. For much of its early years, while the CIA searched for psychic weaponry, CSICOP was on hand to publicly dispute the possibility of such Psycho-technology, ensuring that if it was viable it didn’t fall into the wrong hands. However, in the eighties with the cold war coming to an end and the CIA turning its interests to the protection of corporate rather than cold war America, CSICOP became more and more involved in the defence of pharmaceutical company competitiveness.

The British branch of CSICOP also played a part in setting up the Campaign Against Health Fraud, which later became HealthWatch. The ‘only Professor of alternative medicine in Britain’ (very sic) Edzard Ernst, is a CSICOP fellow traveller and spoke deridingly of all forms of CAM at their 11th International Conference in London. [Jan 2008] Shaking Hands With Monsanto and Big Pharma: The Guardian and Observer’s ongoing war against alternative medicine. A review of Suckers by Rose Shapiro By Martin J Walker

Government Thought-Control of Scientists and Professionals:

This is a two-pronged, "divide-and-conquer" strategy carried out through two teams of covert propaganda agents, which I call the "Pseudo-Skeptics" and the "Pseudo-Paranormalists". The Pseudo-Skeptics pose as members and leaders of the intelligentsia, while the Pseudo-Paranormalists pose as members and leaders of the public's grass-roots "alternative" community. The message of the Pseudo-Skeptics also coincides with the government's "official, public" position on science, while the message of the Pseudo-Paranormalists is intended to represent irrationality, mixed with things like the worst kind of religious superstition and paranoia—to make the government's position seem more rational by comparison—and things the government wishes to discourage though ridicule heaped upon them by the Dupe-Intelligentsia (unwitting or useful educated idiots)

.......What we are presented with as "skeptical opinion", in those magazines on the book stands—such as The Skeptic, The Skeptical Inquirer, or Skeptical Opinion—is more like covert government propaganda ...

.......What the government's reign of thought-terror has done, is reduce the ranks of true skeptics to a small few, who have little or nothing to do with groups or their magazines. I can be confident that these magazines will not respond directly to my accusations, in obedience to a covert policy to never mention or cite anyone who is not a part of the "official" two-pronged thought-control loop. This avoidance is another badge of their conscious fraud. [pdf] Occult Science Dictatorship: The Official State Science Religion and How to Get Excommunicated by William Lyne

The so-called "sceptics" of CSICOP (Committee for the Scientific Investigation of Claims of the Paranormal, headed by Klass) are not true sceptics, but rather a clandestinely controlled false propaganda operation of the OSI (Office of Scientific Intelligence, a branch of the CIA's Science Directorate, under its Clandestine Services, Operations Division). Their operations within the continental U.S. are illegal under the U.S. constitution, but if you read the so-called "national security" laws, you'll see that Congress has betrayed 'We the People' by agreeing to the passage of legislation which permits this betrayal, by allowing pretty much anything the "spooks" want to do. These laws are completely VOID, because Congress has absolutely NO JURISDICTION to pass any law which contravenes constitutional prohibitions against the violation of our INVIOLABLE (human, natural) BILL OF RIGHTS, so they are all liable for prosecution by the PEOPLE for their TREASON.

Like many tricksters, some of Randi's antics have caused problems for himself. He was forced to resign from the Committee for the Scientific Investigation of Claims of the Paranormal (CSICOP) because his accusations provoked lawsuits against hte Committee. One of the most publicized involved physicist Eldon Byrd, a friend of Uri Geller. On May 10, 1988 Randi made a presentation for the New York Area Skeptics in Manhattan. After his lecture, during the question and answer period, a member of the audience confronted him with a tape recording, which allegedly had Randi speaking in explicit sexual terms with young men (the recording was not played during the public meeting). I was present and watched as pandemonium almost broke out. Randi did not completely regain his composure. He accused Byrd of distributing the tape and went on to claim that Byrd was a child molester and that he was in prison. He made the same assertion in an interview with Twilight Zone Magazine. This was untrue, and in a jury trial he was found guilty of defaming Byrd.

Randi has never been married, but his sex life has received published comment regarding rumors of pederasty, including from a longtime friend James Moseley. Randi threatened lawsuits over them, but he never carried through.

February 11, 1996, Toronto Star: "What I had hesitated to mention is that the colorful Randi has been involved in a number of lawsuits. Part of the evidence brought against Randi was a tape of his telephone conversations, of explicit sexual content, with teenage boys. Randi has at different times claimed that the tape was a hoax made by his enemies to blackmail him, that he made the tape himself, and that the police asked him to make it. Whichever version is true, it's amazing indeed that such a person could be taken seriously as a scientific adviser in an organization dedicated to denying claims of child sexual abuse."

"The ‘only Professor of alternative medicine in Britain’ (very sic) Edzard Ernst, is a CSICOP fellow traveller and spoke deridingly of all forms of CAM at their 11th International Conference in London.

It's in quotes, followed by a "sic." The author is quoting an undesignated source, and calling attention to the fact that the description isn't true.

Edzard Ernst writes: "And I’m not a member of CSICOP either."

No one has described you as a member of CSICOP. The article notes that you are a "CSICOP fellow traveller."

Ernst: "Are any of your “facts” correct?"

Yes. Yours are bogus, though.

Randi is a top-notch Liar, Hypocrite
and always pretends to be very serious

His act always so very commanding on
an impressive number of areas - Randi seems to possess expert knowledge.

IMHO his complete disgusting, loudmouthed fraud is exposed rather
sooner than later if one pays attention or looks-up info regarding the "Amazing Turd".

Why do people give him money or even claim to be "fans" or supporters of that "Pseudo-Sceptics for Nazis" movement Randi heads and promotes?

Some people want to follow and idolize some movement, Ideology or individual, that is understandable, but how is it possible the angry-Liar-Childhating-Disinfo-turd
gets chosen, even praised?

Ignore Randi the hateful poison freak - he's lying way too shameless!
To invoke Randi in any discussion is nothing but disgraceful, You followers look like storybook fools.