Commentary from a Nazi at the Birch Society: "Words have specific meanings. When you claim that 'Birchers are fascists' you presumably mean that JBS members subscribe to fascist ideas and proposals ... "

No, it means that you are a smarmy little liar with severe cognitive problems who can't make sense of the English language - just as no one else can make sense of your own bullshit Nazi beliefs - yet you feel that pariah like yourself should lecture your betters. Late at night, when you parade around your bedroom in a Nazi uniform, you feel like a big man. Screwballs like yourself are ridiculed by the average person, so you aren't even that. You're a mouse with rabies. Does that answer your question, little rodent? 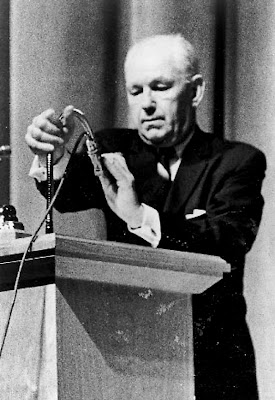 Every once in awhile, I pick up a "mainstream" newspaper and find one of those diluted, generic stories on the John Birch Society - they are strictly formula, always the same. You get a smattering of rehashed history - "John Birch was a missionary ... " - polite, knowing snickers over brain-dead, right-wing conspiracy theories, references to the Society's "conservative" membership, a disingenuous interview with the group's officials (keeping it balanced) - and no mention of the Society's ties to surviving Nazis of WW II, who funded the organization early on and were feverishly communicating with Birchers at the time Kennedy was gunned down on a public street, in broad daylight, by Birchers (who shift the blame to LBJ and the Mafia in their disgusting propaganda), with intelligence and (height of hypocrisy) multinational ties.

The press doesn't care about all that. Keep it status quo, redundant, and asphyxiatingly, willfully ignorant.

"During the Cold War, the John Birch Society branded President Dwight D. Eisenhower, a Republican, as a 'dedicated, conscious agent of the communist conspiracy,' writes Ed Lowe of Appleton, Wisconsin's Post-Crescent. Who doesn't already know that? When it comes to Birchers, the press can only repeat itself ad nauseum because it's easier and safer to regurgitate echo-chamber bilge: "'Communist agents infiltrated or manipulated every level of the American government,' John Birch Society founder Robert Welch claimed."

This is hackery, transcription, self-censorship. This is laziness and superficiality. This is one more cookie-cutter story on the Birch Society.

They are all alike. I read this same tepid story ten years ago in a Dallas motel room waiting to do a BBC interview about the murder of Kennedy by CIA-directed Birchers. I read it a few years before over breakfast in Dayton, Ohio. I've read it in the Los Angeles Times and Washington Post. It's always the same, never digs too deeply, never tells the truth.

Birchers are fascists and that's why they are devoted anti-communists. But most Nazis adopt a respectable, if more-or-less pellucid facade. They wave the flag, make constant references to Christianity, liberty, freedom, "America First."

Fascism is corporatism and inherently conspiratorial. Birchers are the private propaganda army of the ruling class. Lowe doesn't mention this, somehow.

You get none of this from reporter (by some measure, his paycheck) Ed Lowe, but the usual euphemistic, giggly approach to the topic: "Thompson, a widower turned newlywed in March" (who cares? - he's a fascist!), "possesses a deep voice, a hearty laugh and a genuine fear that democracy poses a fundamental threat to the American Way."

Many in Wisconsin agree with Thompson. I've been harassed by these fascist idiots while doing a radio talk show in Madison. I was given time to make an opening statement that "the American government is deeply corrupt ... " when I was told, "we have a call." The caller was a Bircher who let loose with a stream of ad hominems, beginning with "crazy." I wasn't given a chance to speak a complete sentence, how would he know?

"I just said the government's corrupt - most people would probably agree - and this makes me 'crazy?'" I responded. Then, one after another, the ugly smears came in, an orchestrated call-in campaign, obviously, and I was not allowed to say much of anything for most of the hour. I wasn't even given a chance to run down the Society's Nazi connections. Birchers feared what I might say.

They don't fear Ed Lowe, who e-mailed me before writing the article. I explained the fascist history, the Nazi funding, etc. Lowe offered to feature me in the story and allow me to run down the contemptible facts. Instead, he dropped me without a word of explanation - and instead interviewed Chip Berlet, a weasel who mischaracterizes information on fascism ("conspiracy theories") ... which, I point out constantly, is inherently conspiratorial. Berlet is in all those formulaic media stories I spoke about. Berlet is probably CIA funded and doesn't "cross the line." I was out, not that Lowe bothered to explain it to me. When I found the story on the Net, I had to swallow my disappointment. Once again, censorship rules and the cookie-cutter presses out another toxic story.

Ed Lowe lied to me. The article he published is a waste of petroleum. Lowe has betrayed not only myself, but his readers, and that is shameful - but I learned long ago that these "mainstram" wankers only hold onto their jobs by doing a second-rate job of it, so I'm not too surprised by the oversight or bad reporting. It's par for the course, and that's why this blog does fine while the "mainstream" papers weep that their circulation is waning.
Posted by Alex Constantine at 5:43 PM

Words have specific meanings. When you claim that "Birchers are fascists" you presumably mean that JBS members subscribe to fascist ideas and proposals.

Can you specifically enumerate which of their ideas or proposals you consider to be "fascist".

Also, could you explain WHY, if they subscribe to "fascist" ideas, they vehemently condemn all fascist political figures in history?