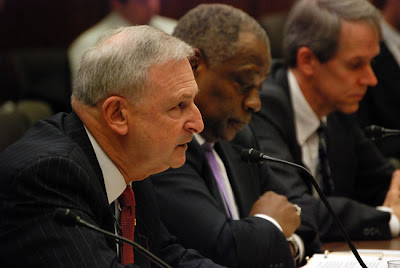 Before his appointment to NTSB acting chairman, Major General Mark Rosenker was director of the White House MILITARY Office under GW Bush, and "in this capacity, he had responsibility for policies, personnel and plans that involve Department of Defense assets in direct support of the President." The mention of his work for the Electronic Industries Alliance (EIA) is interesting in light of Flight 3407's intelligence connections - the chairman of the EIA is David McCurdy, formerly a conservative Democratic congressman from Iowa (key platforms: military preparedness, family values), chairman of the House Intelligence Committee - and an unabashed booster of the CIA who publicly praises Langley's jackalized covert ops. (Wikipedia: "McCurdy had been suggested as a possible Secretary of Defense under President Barack Obama."):

Mark V. Rosenker of Virginia was sworn in as the 11th Chairman of the National Transportation Safety Board on August 11, 2006. He had been serving as Acting Chairman since March 2005. His two-year term as Chairman runs until August 2008. In January 2006, after confirmation by the Senate, he began his second term as a Member, which will expire on December 31, 2010.

Chairman Rosenker became a member of the NTSB in March 2003, and was designated by President Bush as Vice Chairman that April.

Beginning JANUARY 20, 2001 until the announcement of his nomination to the Board, Mr. Rosenker served as Deputy Assistant to the President and Director of the WHITE HOUSE MILITARY OFFICE. In this capacity, he had responsibility for policies, personnel and plans that involve Department of Defense assets in direct support of the President.

General Rosenker entered the Air Force in 1969 as a graduate of the University of Maryland ROTC program. He has worked at all levels of Air Force public affairs during his active duty and Reserve career. ...

8. September 1995 - October 2001, mobilization assistant to the Director of Public Affairs, Office of the Secretary of the Air Force, the Pentagon, Washington, D.C.

9. October 2001 - January 2004, mobilization assistant to the Secretary of the Air Force, the Pentagon, Washington, D.C.