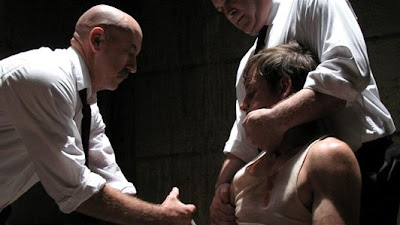 German and French researchers whose work has been cited by the CIA and the Justice Department to help justify the legality of harsh interrogation techniques, including prolonged sleep deprivation, condemned the Bush Administration on Tuesday for misusing their scientific findings.

"It is total nonsense to cite our study in this context," said Dr. Bernd Kundermann, a professor in the Department of Psychiatry and Psychotherapy at the University of Marburg.

"I'm disappointed, upset, consternated and even hurt at seeing this," said Dr. S. Hakki Onen, a sleep specialist and geriatrician with the Hôpital Gériatrique A. Charial, part of the Hospices Civils de Lyon in France. "To see [the research] used in this manner is upsetting because [the CIA's] goals run counter to the therapeutic intent of our effort ... In publishing clinical findings like this, you're aware you lose control of them, because they can be read and even abused by people who may have other objectives in mind."

Kundermann and Onen are the second and third European sleep scientists to speak out this week against the CIA's use of published academic literature on sleep deprivation. On Monday, James Horne, a British researcher who was also cited by CIA medical experts in recently declassified memos, called the agency's medical reasoning "nonsense." (See pictures from inside Guantánamo Bay's detention facilities.)

The study in question by Kundermann, which was published in 2004 in the journal Psychosomatic Medicine, found that people who were deprived of sleep for one night had an increased sensitivity to certain types of pain. Two Justice Department memos, dated May 10, 2005, cited this study as justification to conclude that severe sleep deprivation of up to 180 consecutive hours might cause some increased pain but not "severe physical pain" when used in conjunction with facial slaps, stress positions, water dousing and walling, in which a detainee is slammed against a flexible wall.

"Because sleep deprivation appears to cause at most only relatively moderate decreases in pain tolerance, the use of these techniques in combination with extended sleep deprivation would not be expected to cause severe physical pain," wrote Steven Bradbury, a principal deputy assistant attorney general in the Office of Legal Counsel, who authored the memos.

Kundermann, who found out about the CIA's use of his work from a TIME reporter, said his research did not justify the Justice Department's conclusion. "We were working with healthy volunteers and didn't deprive them of sleep for more than one day without allowing them to recover," he said. "Even under these circumstances, certain changes can occur, such as hallucinations, depending on the individual's condition." (See six ways to fix the CIA.)

By contrast, he noted that the effects of coercive detention and the dietary restrictions imposed by the CIA's interrogation program could have wildly different effects. "It would never be possible in Germany to deprive a person of sleep for several days because this can have serious effects," Kundermann said. "It can result in psychosis, for instance." He said using his study to evaluate the CIA program was like using a study about "the transient reactions of a little schnapps" to justify forcing prisoners to "drink large amounts of alcohol."

Onen was also appalled by how his paper was misused, noting that the conditions of his experiment subjects had little in common with those of the CIA program. "[The study subjects] were distracted from sleeplessness by playing different games or watching soccer matches. They could eat, drink, read and move about as they wished. [From] the American documents, we learn that sleep deprivation spanned from 70 to 120 hours — and set maximum limits of 180 hours for the hardest resisters, which is over a full week without sleep," Onen said. "In other words, they discuss starting the sleep deprivation process at nearly double the maximum we set for ethical reasons."

Onen compared the CIA's use of his study results to the overdosing of medication. "In a manner, it's like giving a drug to a patient: if you administer it in small doses for therapeutic reasons, it helps them. If you give it in huge volumes, it becomes toxic — and can even kill them," he said.
In one of the interrogation memos, which were declassified last week by President Obama, Bradbury cited the work of Horne, of Britain's Loughborough University, to conclude that "even very extended sleep deprivation does not cause physical pain." In an e-mail sent on Monday to Hilary Bok, who maintains the blog Obsidian Wings, Horne wrote that Bradbury's conclusions, based on CIA recommendations, were significantly flawed. "Prolonged stress with sleep deprivation will lead to a physiological exhaustion of the body's defense mechanisms, physical collapse, and with the potential for various ensuing illnesses," Horne wrote. "We don't know at what point this latter phase would be reached with 'coercive techniques,' but to claim that 180 hours is safe in these respects is nonsense."

According to the Justice Department memos, the maximum allowable period of sleep deprivation allowed under the CIA interrogation program was 264 hours, though no detainee was deprived of sleep for more than 180 hours, or 7½ days. Only three detainees had been subjected to sleep deprivation for more than 96 hours. The detainees were kept awake by being forced to stand, sit or recline in uncomfortable positions, with shackled limbs. At the same time, detainees could undergo stressful treatments, including significant dietary restrictions and violence, like waterboarding and walling. (Read "Waterboarding: A Mental and Physical Trauma.")

In the same memos, the Justice Department did note that forced sleep deprivation, when used in conjunction with other techniques, had been called torture in the past, both by the U.S. Ninth Circuit Court of Appeals (in a lawsuit about human-rights violations in the Philippines) and the U.N., on multiple occasions. Nonetheless, the Justice Department memos concluded that the use of prolonged sleep deprivation "cannot be expected to cause 'severe mental pain or suffering,' " as defined by U.S. criminal law.

Speaking from Germany, Kundermann said he was powerless to stop others from misusing his scientific work. "There's nothing we can do to defend ourselves against this kind of thing. There have always been people that were nonexperts and would take results out of context and use them for their political objectives," he said. "Information has always been misused."

— With reporting by Stephanie Kirchner / Berlin and Bruce Crumley / Paris
Posted by Alex Constantine at 6:30 PM