The Nazis of Costa del Sol 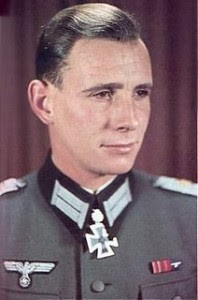 With Hitler’s 120th birthday this week, the Olive Press looks at his legacy in Spain and investigates the comfortable existence his former henchmen enjoyed on the Costa del Sol

IN a verdant Elviria urbanisation the smell of jasmine and honeysuckle hang heavy in the air and an anonymous two-bedroom bungalow sits below a towering cork oak tree.

A visitor could be forgiven for assuming that Las Cumbres was just another unremarkable costa suburb, but here, until the late 1990s, one of Hitler’s most loyal Nazi generals was able to live out a long and comfortable life.

Major general Otto Remer - who played a key role in quashing a major assassination plot against the Fuhrer in 1940 – was able to spend his final years in the modest 220,000-euro house surrounded by Nazi memorabilia and his ‘glorious’ memories. Refusing to repent right up to his death in August 1997, he regularly received correspondence and visits from fellow Nazis around Spain, as well as his monthly subscription to the surprisingly legal fascist organ Halt.

Ultimately, the Nazi lived an enviable life on the sunshine coast, despite being a key member of Hitler’s Third Reich, which was responsible for the deaths of millions of innocent people around Europe during the Second World War.

The Olive Press has managed to track down his home – rumoured to have been paid for by Spanish neo-Nazis - and even the nurse who cared for him in his final years as he became old and infirm.

Speaking for the first time, Jean Goulder, from Burnley, revealed how he refused to acknowledge his part in the world’s worst human rights atrocity.
A holocaust denier he failed to repent and even, according to a separate source, mocked Jews whenever they appeared on television.

“He kept a glass cabinet full of items from the war and photo albums with pictures of his time in the army,” explains Goulder. “All in all he was very proud of his past.”

Remer had fled to the Costa del Sol to escape charges in Germany of inciting racial hatred with his continual questioning of the holocaust right into the 1980s. He had become a writer and published articles on the war and the holocaust after being released as a prisoner of war in the mid 1940s. An infamous holocaust denier and a firm believer in Hitler’s politics, he had been commanded by the Fuhrer himself to quash the July 20 plot against him in 1940.

The quelling of the plot led to him being promoted to Hitler’s senior ranks, which is where he stayed for the duration of the war. In the early 1990s he was forced to flee from Germany to southern Spain where he had a number of good contacts.

“There were police kept outside his house for a good while, maybe a month or so,” he recalls.

“We thought they were keeping him from going anywhere but actually they were protecting him from people who may have wanted to harm him.”

His nurse also witnessed the publicity surrounding the arrival of the famous Nazi.

Goulder, who is in her 60s, says: “There was a lot of press waiting outside his house the first day or two that I worked with him, but eventually the interest died down.

“He had to keep quiet after that as he knew they were after him in his own country.”

In fact, Remer was protected by Spanish law, despite his home country’s wish to extradite him to Germany and face charges. Under Spanish law he had committed no crime as he was considered to be exercising his right to freedom of speech. Remer, of course, was just one among many Nazis who fled Germany in the years after the war to avoid repercussions for their actions.

Many used Spain as a local jumping off point for South America, where right-wing leaders greeted them with open arms. However, a lot also benefited from Franco’s protection and stayed to make a life for themselves without intrusion from the outside world.

José María Irujo, author of The Black List, estimates that whole colonies of them lived here undisturbed for decades. “Many lived out their lives here and died peacefully,” he says. “We are talking about hundreds of people and the Spanish government never did anything.”

The Olive Press has discovered countless examples of small communities of Germans that existed on the Costa del Sol from the 1940s.

On the Costa de la Luz numerous Nazis were said to have been given plots of land by Franco’s government to quietly live out their days. In particular, in and around the exclusive urbanisation of Atlanterra, a number of Nazis were said to have set up home (curiously also where Kenneth Noye, Britain’s former public enemy number one, also still has a home). 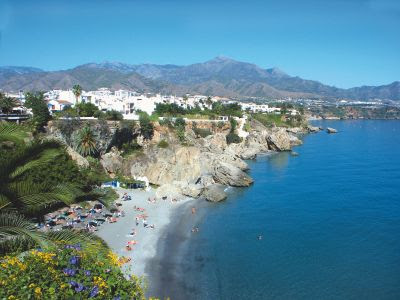 Investigator Gwilym Rhys Jones explains how the son of a former SS officer told him how his family were often joined by other Nazis, near Barbate, where they used to head for rest and relaxation. He said the enclave was guarded by Franco’s troops both during and after the war to protect the Nazi ‘holiday camp’.

Nearer to the Costa del Sol, inland at a place called Barranco Blanco, between Coin and Alhaurin, another infamous camp was apparently set up by Franco himself. Said to have chosen the area of natural beauty as a retreat for his close friends, the well-fortified base was the home of a number of Germans.

“There was quite a big German community living there next to a lake, known for its trout fishing,” said Amanda Jane Reynolds, who has lived in the area for 30 years.

“My parents often used to go there for lunch in a German-run restaurant and you had to go past armed guards to get in.”

These days while Barranco Blanco has remnants of the towers that were once guarded by Franco’s civil guards, locals refuse to talk about the area’s chequered history.

Nearer to the home of Remer, another community of Germans literally disappeared overnight when Franco died in November 1975. According to local gardener Santi Esteban the group that lived at Camping Marbella Playa fled to South America, fearing persecution with Franco’s protection gone.

“They lived in small chalet-style homes, which literally emptied overnight,” he said.

“Nazis, who had enjoyed immunity under Franco, foresaw the media storm that would approach and fled before their pasts caught up with them.”
Nazi hunters did indeed descend on the costas to try and bring Hitler’s footmen to justice. However often they were too late as their targets had fled or died.

In 2005 one of the most wanted Nazi war criminals of all allegedly escaped Spanish police and could still be living at large in South America.

Aribert Heim, who was known as Dr Death at Mauthausen concentration camp for his sadistic experiments on inmates, counted Spain as one of his hideouts.He allegedly evaded capture by Spanish police after being helped out of the country by fellow Nazis.His children claimed the war criminal - tried in absentia in Germany for crimes such as injecting poison and petrol into the hearts of Jews and timing their deaths – had died in Cairo in 1992.

But increasing numbers of sightings in Spain and sizeable bank transfers from his family to the Catalan town of Palafrugell caused an international search to focus on the Costa Brava and southern Spain until the trail went suddenly cold in 2005.

It is alleged he may have been helped to escape by Fredrik Jensen, a Norwegian Nazi who served in the SS and was awarded the Gold Cross by Hitler.Jensen - who was one of very few foreigners to receive the highest decoration granted by Hitler – had fled the US after being deported there to face trial for war crimes in 1994.

Surprise, surprise he ended up being discovered living in Marbella in 1999.
Jensen served in a number of SS units and fought on the front during the war before spending time in an American military hospital and eventually being jailed for ten years for fighting for the Nazis.

When he was released from jail, he moved to Sweden where he made his fortune.

Interpol classed Jensen as a war criminal and in 1994 he was deported to the United States for war crimes, but from there he disappeared.
In fact Jensen and his wife Karin had moved to the urbanisation of Las Belbederes populated by retired Scandinavians and enjoyed the sunshine and easy life.

Another unrepentant Nazi was Belgian Leon Degrelle. He had been sentenced to death for collaboration after the war, but managed to escape to Spain in a plane provided by Albert Speer, which he crash landed in San Sebastian before heading south. He made a life for himself in Malaga, where he continued to host meetings with Nazis and European right-wing extremists and lived very comfortably, running a construction firm which benefited from state projects.

He often attended formal functions dressed in his German SS uniform and, in a 1977 interview claimed he would be a Hitler fan until the day he died.
While Interpol listed him as wanted, he evaded a kidnap attempt by Belgian authorities, then ruled out any further chances of extradition by becoming a naturalised Spanish citizen in 1954.

How many such Nazis remain here is unknown, but Nazi hunters have long been appalled by the lack of cooperation from Spain in seeking out those who need to be brought to justice.

Dr Shimon Samuels of the Simon Wiesenthal Centre presented a list of Nazis granted refuge in Spain. “But none of them have been prosecuted and several died with impunity in Spain,” he says.

With neither time nor the authorities on their side, it looks likely that the Nazi hunters will have to stand by helpless, as the last few remaining Nazis live out their days in the shadows of the costas.
Posted by Alex Constantine at 12:06 PM