Is a CIA Murderer Living Free in Virginia? 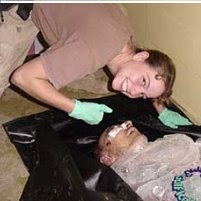 The Abu Ghraib scandal raised all kinds of speculation over whether U.S. personnel crossed ethical lines or even broke the law. But in the case of one CIA interrogator, the U.S. government has stated that Mark Swanner committed the worst crime of all: murder. According to the U.S. Army’s Criminal Investigations Detachment (CID), Manadel al-Jamadi, an Abu Ghraib prisoner whom Swanner interrogated, died from “blunt force injuries of the torso complicated by compromised respiration,” resulting in “homicide.” Al-Jamadi was beaten to death inside the prisoner shower at Abu Ghraib prison. The Army referred Swanner’s case to the Justice Department for prosecution, but he was not arrested. In fact, he kept on working for the CIA, according to a 2005 story in the New Yorker. As of last Wednesday, Swanner was living at his home in Stafford County, Virginia. His attorney said her client had heard nothing further from the Justice Department about being tried for murder.

http://www.allgov.com/ViewNews/Is_a_CIA_Murderer_Living_Free_in_Virginia_90412
Posted by Alex Constantine at 7:53 AM