The latest media report on intimate connections between the Nazi regime and the Catholic establishment:

" ... March 14, 1939 is the day when the wartime Slovak state, a puppet of Nazi Germany led by Jozef Tiso, a Roman Catholic priest, emerged. There have always been historians and politicians who tried to camouflage the rotten core of this part of Slovakia’s history, when according to historical sources, some 70,000 Slovak Jews were sent to concentration camps. ... "
http://www.spectator.sk/articles/view/34741/11/some_anniversaries_tear_off_the_soft_scabs_of_history.html

Yet as many ranking Catholics see it ... 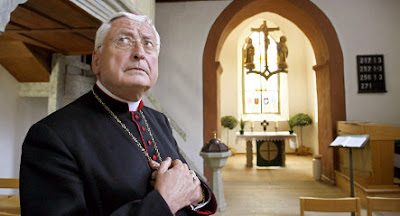 One of Germany’s most senior Catholic bishops has caused outrage by attacking atheism and implying a connection between non-belief in God and the worst crimes of Nazism and communism.

Walter Mixa, Bishop of Augsburg said in his Easter Sunday sermon, “Where God is denied, or opposed, soon Man and his dignity will also be denied and disregarded.”

Mixa, who is also the Catholic church’s military bishop in Germany, added, “The inhumanity of practiced atheism has been proven in the last century in the most terrible way by the godless regimes of National Socialism and Communism with their punishment camps, their secret police and their mass murders.”

He also claimed that Christians and the Church had been particular victims of those regimes. ...

Well its the ever blackened pot flinging mud around while scrupulously covering up the many vatican crimes.

Sexual abuse of the children is nothing new and goes back to the very formation of the christian church as a hierarchy.